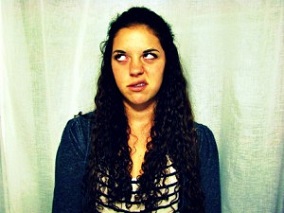 “This smell is fucking horrible,” one of the residents says to me over the phone.

“I know! Isn’t it gross?” I respond, hoping to shut her up. This is the woman who, on my second day of working at this transitional housing unit for homeless youth, I have already started to despise. She has this eye rolling thing going on in which every one of her bitchy complaining sentences ends in a rolling of her eyes, as if that movement is necessary to complete a statement. She’s calling me now about the smell in the apartment building. As if I don’t smell it, too. As if I’m completely unaware of the sewage stench seeping out of the old paint-chipped walls. Not only can I tell from her demanding voice that she expects me to do something about this smell, but I can also feel her eyeballs rolling at me as she stands in her room, most likely with her arms crossed, her foot tapping the stained carpet, and her cracked phone smashed up against her ear by her round, fleshy shoulder. It is 11pm, and there is nothing I can do except to piss her off so she’ll stop calling me from upstairs. “You’re on the third floor, right? Yeah you’re totally lucky. It smells much worse down here.”

“Hhhuhmph.” She chucks an angry breath into the phone and hangs up.

Within a few minutes, I see her on the security camera, marching down the stairs and towards my office. Soon enough, she is standing in my doorway with those thick pale arms crossed over her chest.

“This smell is bad for my health.” The upward arch of the eyebrows, the dramatic sweep of the irises starting at the left sides of her sockets and arching over to the right corners.

“It is a pretty bad smell,” I say, trying to come up with something that will make her go away. “Sucks to be living here, huh?”

This, as I suspected it would, pisses her off. Now, she slowly, slowly blinks her eyes with an odious amount of exaggeration at my offensive statement. This time, though, she actually rolls her eyes at me not once, but twice(!). “Well my baby is staying with me tonight, and this smell is going to make her sick.” Eyebrows up again, followed by the arch of the irises, again. Her sockets must be getting tired.

“Um,” I pause, raising my own eyebrows at her. “I don’t think the smell is contagious.”

Her facial expressions flip out on me. A combination of disbelief, disgust, and hatred surges through her skin—a contortion of flushed flesh conveying her sentiment of What the fuck bitch?!?

Her eyes bulge and show how amazed she is, how much she cannot believe that someone dared to compete with her for the title of bitchiest bitch in the building. And because I have obviously won this round due to the fact that she is silent and frozen and unable to respond, she turns to her only defense in this situation: rolling her eyes. I fear those eyes are going to pop out of her head, which would make me hate her even more as then I would have to clean up the mess and fill out a lot of paperwork about the incident. That would just be annoying. Her eyes better not fucking pop out of her head while I’m here. I stare at her for second, smirking at her marathon of eye rolls. She gives one last roll then slaps the door frame with her pudgy hand, turns her body towards the stairs and loudly stomps away.

About the smell: At 11pm, some stink resembling that of sewage mixed with a dead rat announced itself, tore through the walls of the apartment building and plunged into our noses. This building is a government-funded transitional residency for homeless youth. There are thirty-five units here, and each studio apartment occupied by a youth who is trying to get back on his/her feet. They will live here for two years—sometimes more—without having to pay rent, which allows them to concentrate on finishing up school and entering the workforce.

I am a direct care counselor for them—hanging out at night, just being there in case something goes wrong. And yes, the smell of sewage pipes frothing up from somewhere and/or the stench of some dead animal decaying in the walls is definitely a something that has gone wrong. But I am neither a plumber nor an exterminator. So when the eye-rolling resident came down to bray to me about the obvious smell, I did not understand what she expected me to do.

She stayed away from me for the rest of the night.

The next night, the smell is gone, but eye-roller still comes down to spew out something, anything, to me. She stands in my doorway and makes her complaint of the day, seething with irritation at something that I, again, can do nothing about.

“209 is having loud sex again.” Eye roll. “And it’s nasty because she’s fucking her brother.” Eye roll. “I don’t want to be anywhere near that nasty shit.” Eye roll. Dramatic blink of eyes, chunks of mascara sticking her eyelashes together each time she slowly blinks. Eye roll again for emphasis.

“Oh that’s just ridiculous. I doubt she’s in there fucking her brother.”

Soon enough, though, she regains her attitude and says, “Well she’s being fucking loud.” Eye roll. “And they’re totally fake moans.” Eye roll. “If she’s going to be so fucking gross and fuck her brother, she should at least not have to fake a fucking orgasm.” Eye roll.

“Damn,” I say, again trying to annoy her so she’ll go away. “That’s quite unfortunate that she has to fake an orgasm. I feel bad for her.”

Due to the fact that her jaw drops at this, I see now that she does not have enough muscle range in her face to simultaneously roll her eyes. Multi-tasking is a skill, and I do not think this angry, one-track minded woman has yet to learn how to do two things at once. This is probably why she has to wait until the end of a sentence to roll her eyes—her muscle concentration unable to simultaneously speak and roll.

The next night she calls me again from her room, and I can actually hear her eyes rolling at me.

In fact, the feel of her rolling eyes–even though she’s two floors above me–is so powerful that when she takes a breather from her bitching, when all that can be heard through the receiver is that of her pupils arching back and forth in her eye sockets, her breath silent but her eyeballs screeching, I poke my head out of my office door to look at the stairwell. I fear those two big orbs of her eyeballs have jutted out of her head, surged away from their sockets, are now somersaulting down the stairs, Slinky style, and are soon to breach the boundary of my office.

I pull my head back into the office as she starts in on another stream of complaints, starts going off on an insignificant thing like a noise, or someone breathing, or maybe even just the feel of air on her skin. Anything can irritate this woman.

I do not know what precisely she is saying, because while it is only my third night of work here, I have already stopped listening to her. Plus, I just don’t have the energy to pay attention to what she says in order to be able to bitch right back at her tonight. So as her words plow into my ear, gaining strength and forcing me to listen to how there’s a pair of squirrels in the alley near the dumpster and how they’re going to chew their way into the building and how they will infect everyone with rabies, I rip the receiver way from my ear and hang up on her before I shout something that will get me fired within my first week of work. I try to breathe, and that doesn’t work, so I do the only thing I can do in this moment to express my annoyance: I roll my eyes.