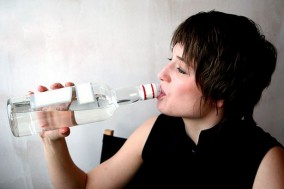 Like most writers, I find myself very intrigued by opposing desires. I like to explore how several emotions, needs, or ideas can exist inside the human body and mind at once, and what reaction that may cause; or how one need impedes on another. The alcohol, specifically a bottle of vodka, became a metaphor for this exploration in Half Empty Bottle. The descriptions in this poem move back and forth between pleasure and displeasure. At the beginning, there are soothing details like “silk” and a “breeze” followed by the threatening description of the “pinch to the mouth;” then, there is the hopeful image or idea of the “wishing well” followed by the discouraging “bitter rim of flame.” Pleasure is always accompanied by antagonism: the idea of something being comforting or enjoyable, but also having a certain danger to it.

I tend to view alcohol through this lens of duality, because my birth father was an alcoholic, and I, as well as some of my other family members, have confronted other struggles involving it. I was less interested in exploring the social ramifications of alcoholism and more interested in exploring the complexity of the drinker’s relationship to alcohol. I wanted to examine how this person sees the substance and negotiates the opposing desires of wanting the feeling of what the liquid offers (relief, pleasure) with the knowledge that those gulps can harm or threaten their stability. This fragile line the drinker walks lends to the tension and images in this poem.

Open endings risk misinterpretation, which is why some writers avoid them, but they can also lead to complexity and discovery, which is why I find them so engaging. I have received some feedback on this poem before where opinions were divided between a positive and negative interpretation of the ending. Some interpreted “the things that/hide/ breathe again” as lines that indicated the emergence of dark emotions, while others found a sense of relief, as if the poem’s character was being stifled and is now able to breathe in some way. I appreciated each of these interpretations and believe the ending as well as the rest of the poem is a mixture of these two ideas. I want readers to engage in the experience of the poem and make conclusions about it based on their worldview and relationship to the bottle.

Denise Rodriguez currently lives in Austin, Texas. She received her MFA in Poetry from Texas State University in San Marcos and her B.A. of Arts from The University of Texas at Austin. She has been published in Analecta 33, Kweli Journal, A River and Sound Review, and The Pedestal Magazine. She has work that will be published in Room.
Denise Rodriguez

Denise Rodriguez currently lives in Austin, Texas. She received her MFA in Poetry from Texas State University in San Marcos and her B.A. of Arts from The University of Texas at Austin. She has been published in Analecta 33, Kweli Journal, A River and Sound Review, The Pedestal Magazine, and has work upcoming in Room.