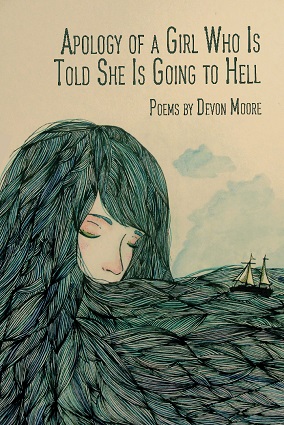 Found mothers, grief, lost loves, addictions and 12-step programs inhabit these poems of narrative excavation rife with lyricism and imagery. Unflinching, at times cinematic and occasionally comic, the poems in this collection will seize you in their stilled, dark complexity. Always grounded in experience, imagination, and clarity of expression, Moore’s poems take you from her father’s deathbed to the ocean’s edge, from the visceral skin and bone reality of misaligned spines and developing breasts to the liminal (un)reality of chupacabras and ghosts on the stairs. Moore reminds us of the riptide, of the terrifying, terrible spectacle of this felt world, its beauty and wonder.

“Book of water, ashes and bone—Devon Moore’s moving, elemental debut is part autobiography of toughness, and part meditation on desire. Apology of a Girl Who Is Told She Is Going to Hell is deeply rooted in the sensual delights and fierce realities of the material world: the smell of oranges, a morphine drip, wind chimes, a plastic feeding tube, “grapefruits and Freon and light.” These shining poems open themselves again and again to pleasure, even while they serve as “armor against the pain of this world.” – Erika Meitner

“Devon Moore makes spaces that are theaters for the soul. She makes them carefully and fearlessly, shining light into the dark places, sounding the depths, taking their tensile weight and assessing what it means to be the living girl, woman, survivor. In attics, basements, bedrooms, back porches, shoeboxes, urns, sheds, rest stops and the interiors of cars are the material she must sift through to find her inheritance. Sometimes the spaces are exploded with longing or love or shame or skepticism. What I like best about Moore’s work is the great reciprocity, the generosity that allows the “closeness to what hurts us” be conducted into our being.” – Bruce Smith

“Devon Moore’s poetry is lifelike – revealing, rhapsodic, comic, and inviting. Even poignant. After reading her book, I’ve decided that if she is going to Hell I’d like to join her.” – Michael Burkard

I tell you this so that you know: There was once a body
of a woman on the beach, with legs glowing white and the fabric

of her bathing suit bodice strained, I yelled mother at her
from the water of a lake, my tiptoes barely puncturing the sand bottom,

my neck barely reaching air. I wanted her to float with me,
be as I was, a suspended tensile weight. In that position

there was no need for food or shelter, there would be no need
for imagining things. In that position, there was that feeling that

you could be all the things you weren’t, but she wouldn’t come,
wouldn’t even look at my voice directed at her across the slow

rolling Erie, wouldn’t even look when the life guard jumped in
to save me. Shame, the kind caused by going to school with stains

on your sweatpants, the same shirt for a month, for a year,
sticks to your ribs like fat. We teach ourselves shame

of our fat and breasts and muscles, too. My mother and I, little girls
decades apart, keep walking outside of ourselves to get away.

She was once a girl in a red dress, bony armed, wrists
you could wrap a fist around, a chest of rosebuds, and a pile of adventure

books by the bed she shared with her sister and all that a lit cigarette
against her skin would later fail to deliver. For a day my mother had

a new red dress, so pretty, so pretty, all other desired redresses
of poverty and drunkenness forgotten for that tensile moment,

she floated in happiness when she set the dress in the bathtub,
poured out the bleach to clean it, a corrosiveness at hand

she didn’t recognize until too late. I tell you this so that you know:
there are some absences of color I can’t get back for her,

prismatic light reflected on a lake, her body,
moving slow and so far away.

Devon Moore hails from Buffalo, NY with a lot of time spent growing in Wilmington, NC. A former high school English teacher at Dewitt Clinton High School in the Bronx, she currently lives in Syracuse, NY where she teaches writing at Syracuse University and SUNY Oswego. She received her MFA in Creative Writing from Syracuse University. Her poems have appeared in Gulf Coast, Harpur Palate, Meridian, The Cortland Review, and others. Apology of a Girl Who Is Told She Is Going to Hell is her debut collection. You can visit her at www.devonjmoore.com