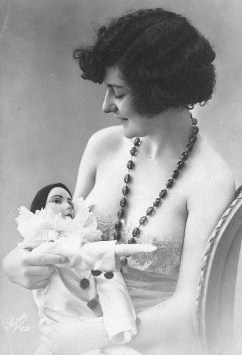 “Drink this,” she said. She pushed my face toward her breast. “Drink up.”

I didn’t want to look away from her face, but I did as I was told. I rolled my eyes up to catch her look of rapture as I pretended to drink. My questions stayed inside so as not to disturb her. I put her actions in the category of behavior I called Strange Habits of the Wealthy.

A few days later I sat on the edge of the bed, the rumpled bedclothes behind me smelling of stale smoke and sweat. I noticed my clothing was looser. My feedings were failing to nourish my body, but that was no surprise.

“Come to me,” she said, crawling back under the messy covers. “Tell me you need me.”

I told her whatever she wanted to hear. I’d only known her a week but I couldn’t live without her. She dabbed perfume on the soft spots of her body in the intervals of absence and I breathed it in, dizzy with a desire to possess her, to become part of her world. My feet no longer touched the floor.

When my clothing was no longer wearable, she sent for a tailor. She was not worried.

“Tell me you’ll never leave me.”

Those clothes were soon too large as well. She cradled me in her arms at night, my feet barely brushing her knees. Dizzy with hunger, I nibbled on the ends of her fingers as she slept.

I didn’t leave the bedroom until the day she picked me up and placed me on her hip. As she carried me out to the kitchen, I wondered at how many years had passed since I’d last wrapped small arms around a woman’s neck. Surely no one picks up a child older than five or six, so at least thirty years. Yet it felt so natural, so naughty. Habits One Ought Not to Have.

Wet white kisses on the windowpane. Atmospheric fallout. I was so thirsty.

The tailor did not ask questions when he was brought to the bedroom.

“My baby,” she said. She stroked my head, her hand soft as my cheeks and smelling of rose water.

Anne Earney lives in St. Louis with her husband and several well-mannered cats. She earned her MFA from the University of Missouri-St. Louis. Her fiction has been published or is forthcoming in journals such as REAL: Regarding Arts and Letters, Caper Literary Review, The Bat Shat, Hayden’s Ferry Review, Natural Bridge, The Linnet’s Wings, Six Little Things, Night Train, and Versal. She is currently working on a Gothic novel.