Instead of buying nothing, he bought something. Tents in the Wal-Mart parking lot, protesters demonstrating for one day of no purchases. He declined to participate in the non-action.

Jean-Paul Sartre has been dragged to a Buy Nothing Day demonstration. His niece is an activist. She is yelling at the influx of customers, begging them not to go into Wal-Mart. She covers her face with a camouflage bandana. Sartre does not cover his face. There is no need. He is unrecognizable.

A man calling himself Diddy will introduce Sartre as the keynote speaker, but Sartre will not say anything. When Sartre is introduced, he will hide behind a fat woman.

Cardboard signs declare that Wal-Mart is killing small business, that it has racist business practices, that it builds Wal-Marts on Aztec ruins. On these cardboard signs, wordplay is king. Sprawl-mart. Appall-Mart. Some of them don’t even make sense.

P. Diddy is late. The activists look at their wristwatches. Wal-Mart’s mechanical doors open and close.

It is the day after Thanksgiving, the biggest shopping day of the year. Consumers are looking for bargains, but really they are looking to be part of something. Sartre’s niece and her friends have linked arms to form a human chain across the front of the soda machines.

P. Diddy arrives by helicopter. He lands on the Wal-mart roof and rappels down the side of the building, dressed in clothes that all bear his own signature.

P. Diddy adjusts his sunglasses. “As I stand here, the best way to describe how I feel is that I’ve arrived this morning to a party that’s been going on all night. Now I know the party has been going on for some time, and even though I am late, I am right on time.”

He holds up a magazine with his face on the cover. “We read magazines so that they filter all the crap out there and tell you what you need. We pay them money to do this … we trust them. People are going to buy phones, subscriptions and downloads … a thing that they want, but someone has to tell them what they need. That’s what they will pay for.”

Sartre’s niece, Samantha, is making out with an activist boy. They have lifted their bandanas to kiss. Another boy is lovingly decorating a brick to be thrown at the Plexiglas windows of Wal-mart. He asks Sartre to autograph it.

Sartre searches for his sister in his niece’s face, for his ancestors, his grandfather.

P. Diddy unfurls a large chart. “Billions of dollars every year on music, on fast foods, on cosmetics, on soda, and yes, on consumer electronics and wireless communications technology. I’ve been doing my thing while you all have been playing with your cellphones. It’s all about the cellphones … cellphones, cellphones, cellphones.”

Sartre has become distracted, watching a small boy ride a mechanical dinosaur. The child is unaware of Buy Nothing Day, unaware of the quarter his activist mother has furtively dropped into the dinosaur to propel it into motion and stop her son’s screaming. The boy is four years old, wearing a tiny Che Guevara shirt.

“Most of you are familiar with the book Understanding Media by Marshall McLuhan,” P. Diddy continues. Sartre raises an eyebrow. “How you received the information changed the way you perceived the information … Not wanting to appear stupid, I waited a few minutes to see if I could figure out what it meant.”

Sartre has not prepared a speech. In fact, he came here with no intention of speaking at all. Say nothing day. Not interested in attaching his name to a cause.

P. Diddy announces Sartre, but he is hiding behind a fat woman.

When Sartre doesn’t appear, P. Diddy continues. “Try sitting in a car with no CD player or radio or 10 speakers … it won’t be easy. It will happen. It takes time, but everything is moving faster than it was two years ago.”

Instead of buying nothing, he bought a small plastic keychain. He dropped in a quarter and turned the metal crank of the keychain machine.

No one saw him except for the four-year-old, who began crying for his mother to buy him one too. The keychain was shaped like a monkey.

* This story samples P. Diddy’s speech at on Mar. 14, 2005 at the cellular industry’s annual confab in New Orleans, and Jean-Paul Sartre’s refusal to deliver a speech at the Nobel banquet in 1964.

Mickey Hess is Associate Professor of English at Rider University, and the author of Big Wheel at the Cracker Factory (Garrett County Press, 2008), which was featured as “Critic’s Choice” in The Chicago Reader, described as “thoroughly humorous” by The Cleveland Plain-Dealer, and mentioned online at The New Yorker, Poets & Writers, and USA Today. He has a regular column — “I Will Blurb Any Book Within 24 Hours” — at TheRumpus.net, and his stories and essays have been published in Created in Darkness by Troubled Americans: Best of McSweeney’s Humor Category (Knopf, 2005), and such journals as McSweeney’s, Ninth Letter, Punk Planet, Fourteen Hills, Quick Fiction, Fringe, and The Rome Review. He won third place of 1,400 entries in the McSweeney’s 20-Minute Stories Contest. Further, he is the author of Is Hip Hop Dead? The Past, Present, and Future of America’s Most Wanted Music (Praeger, 2007), and the editor of Greenwood Press’s hip hop reference series, for which he has published two edited collections: Icons of Hip Hop (2007), and American Hip Hop: A Regional Guide (2009). 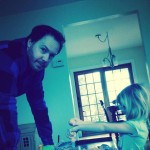