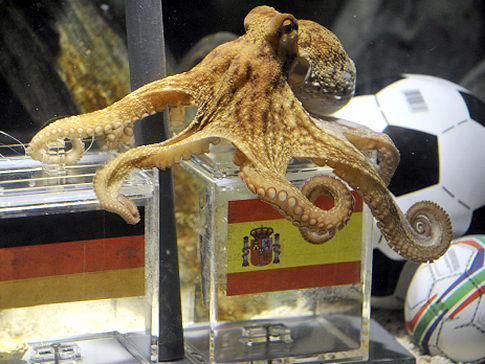 Psychic Octopus poses while predicting the impossible: A Serbian win over Germany?

Don’t let his oracle fame fool you, Paul the Octopus is a smug little bastard. Prefers to go by his general species name of GPO (Giant Pacific Octopus), only he insists that in his case it stands for Grand Poobah Oracle. Psychic Octopus: Roughly the size of a soccer ball. Coincidence?

It was tough to get in to see him; he’s a big shot now. He generally won’t take calls, spurns his agents. Doesn’t wish to speak with anyone but his German handlers.

Having interviewed other octopuses I knew Paul would be formidable–enormous brain,  species billions of years old—but I wasn’t quite prepared for the equally evolved  arrogance. GPO:    You should be kissing my tentacles.

CHE:    So, the world wants to know. How did you guess all the world cup soccer matches? And the German ones before it?

GPO:    You think that was guessing? Despite all your probability and logic? You would think that.

CHE:    Forgive me. You’re clairvoyant then?

CHE:    Why soccer? Why tune in to our futbol matches?

GPO:    Why soccer? [Gurgle-laugh] How can you presume to know this sport when you have just two feet? Imagine real soccer, played by eight-legged players. Imagine the combinations and permutations we would deliver in a match against you.  We would annihilate you, outthink and outflank you at every turn. Ha! Don’t make me gurgle. Now let me ask you a question. You’re from Argentina, yes? GPO:    I understand there’s a great Argentine recipe for octopus. I believe one of your chefs wanted to beat me like a milanesa first so I would be nice and tender.

CHE:    Ah, I’m sure he didn’t mean it. We Argentines can become impassioned over our futbol.

GPO:    Yes, of all the caveman countries on this planet, you Argentines worship the sport like a religion—and yet, to what end?

CHE:    Maybe we should talk about something else. GPO selects Germany to defeat Argentina. And they sure did.

GPO:    What was it? A 4 to 0 loss to the Germans? My handlers rejoiced. It was you, the Argentines, who were beat like a milanesa, no?

CHE:    Let’s just talk about something else.

GPO:    It was referred to as ‘the worst Argentine World Cup loss in 36 years,’ yes? How’d it feel? Getting crushed like a bunch of dainty old ladies?

GPO:    It reminded me of that other world cup. Remember that photo of your teammates, holding their sacks? I thought it very apt. GPO:    What agony. Such crushing defeat. Nothing else quite like it, is there? I wouldn’t know, of course. If I’m anything, I’m a Spaniard at heart—I have three of them you know. Hearts.

CHE:    I thought you were originally from England?

GPO:    Not anymore. They want to saint me, you know. The Spaniards. CHE: I’m sure they will, Paul. Right after they fry you up.

The rest of the tape consists of guttural sounds and struggle, punctuated by swears and gargles–Bastard! Glrooosp… Eat it! Glarpoost!—as I attempt to beat Pulpo Paul with his own tentacles. The Germans threw me out of the bar with Paul watching, both of us a little bloodier, maybe wiser. Most certainly ready for the FIFA World Cup 2014 played on my home continent, in my sister country, Brazil.

All are invited, and I’m planning a party. Main course, octopus.