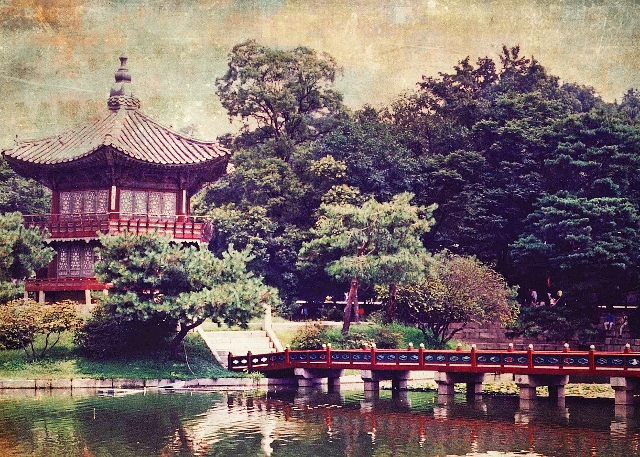 One afternoon in the early spring, Yasmine and I ended up in a department store on the way to Itaewon, a section of Seoul sometimes referred to as Little America. A nickname born of its close proximity to an American military base, and the fact that shops, restaurants, and clubs catered to American soldiers. As we passed the jewelry counter in the mall, Yasmine suggested we buy matching rings.

“Why?” I asked incredulously. Except for earrings, I didn’t wear jewelry.

“I always thought it would be nice to have a friendship ring. But until now, I never had a close enough friend,” she looped her arm through mind and pulled me closer to the display.

I felt flattered, but by then, somewhere deep in my subconscious, something had begun to nag at me. At random moments, I’d feel a prick, a pinch, as the notion attempted to bore its way back into my conscious mind. The secret I spent so much energy frantically attempting to bury. Lately, I had learned to successfully refuse its entrance, but in quiet, solitary moments when it grew persistent, I swatted at it like a buzzing, bothersome mosquito.

“A ring…might be nice,” I looked at my hand, wondering which finger I’d wear it on. At the moment, I was so focused on my finger and my subconscious dread that I barely noticed the word I had used, the bland, noncommittal adjective. Nice? Isn’t that what people used when they didn’t have anything good to say, but didn’t wish to say anything negative either? But why would I shy away from her gesture? From her overt proclamation of how much she valued our friendship?

Looking into the glass case, she pointed to simple gold band, which too closely resembled a wedding ring. “What do you think of that one? We could even have our names engraved. That way when you leave, when you go back to America, you won’t forget me.”

“I wouldn’t forget you anyway.” I laced my fingers through hers, and she gently squeezed my hand.

“You will. If only you could take me to America with you.” Then she smiled again and led me back outside. “We’ll come back.”

But we never did go back. We never did purchase rings because a month later, Don arrived from Canada and started teaching at Wonderland. Blond, blue-eyed, thin, and overly enthusiastic about learning Korean, his first priority was in finding a Korean girlfriend. Dating a Korean girl, he reasoned, would embed him more deeply in Korea, make him more vested in society. Why he felt so driven to immerse himself I never did ask. At the time, I didn’t care. I only prayed he would disappear.

Because the moment he stepped into the faculty room for the very first time, he settled his attention on Yasmine. His second Saturday in Seoul was the first Saturday night in weeks that Yasmine and I did not see each other for even a few minutes. It took her only a few days to succumb to his pleas, promising to go out with him on one date. But one turned into two, which turned into three and soon ushered in a serious long-term relationship. Even when Yasmine invited me along, remembering how inseparable we once were, I often declined.

I’d never felt so jealous of anyone. So threatened. Yet I knew I shouldn’t feel that way. She was only a friend, I repeatedly reminded myself. Just a good friend, the best friend I had made in Korea. But if she was only a friend, why did I feel so empty without her? Why, at night, when I lay in bed alone, did I feel as though I had been shipwrecked and tossed up onto a deserted island?

A couple weeks before my contract expired, Yasmine invited me to join her and Don for a night in Itaewon. At first, I balked at the idea. Don was the last person with whom I wished to spend an evening. But after thinking about it, considering my options, I changed my mind. In two weeks I would be gone, and then what? I’d miss Yasmine, and it would be too late to undo my stubbornness. To avoid regret, I agreed to go.

When I met Yasmine at the subway station, our agreed upon meeting place, I was surprised to find her waiting for me alone.

“He’s sick,” she smiled, putting her arm though mine and leaning against me as we sat down in the subway car. I was elated. In no way would I miss him, but I worried that she would.

After a quick dinner at Nashville, a burger joint, we crossed the street to J&Rs, the bar we frequented before Don entered our lives. Since it was still early, the place was relatively empty. Sitting down at the bar, we ordered beer. I didn’t care for Korean beer, but it was cheap, and both Yasmine and I drank as though we were parched. By our third round, the place was packed with Americans. Music pulsed around us and when No Doubt started to sing “Don’t Speak”—a song that still reminds me of her—Yasmine leaned over and kissed me on the cheek. I smiled, and her deep-brown eyes sparkled. My chest tingled, and I held her gaze until out of the corner of my eye I saw Don lurking in the doorway. Had she done it to provoke him? Or was she genuine in her affection? Either way, I was irritated by his intrusion.

Anger and disdain rapidly dislodged the euphoria I had felt seconds earlier. Scowling, I confronted Yasmine, “I thought he was sick.”

“He was.” She looked as genuinely confused as I was, but instead of anger, her eyes seemed to twinkle with delight, the way a child’s might just before executing a prank.

“Let’s dance,” she grabbed my wrist and dragged me to the dance floor. I’m a terrible dancer. Not wanting to embarrass myself, I rarely danced. The exception, of course, was when I was drinking. After a few beers, I didn’t care how awful I looked.

Don watched us as we disappeared into the crowd. Instead of following us, he headed over to the pool tables. He quickly made friends with three other guys and joined their game. When the music slowed, I tried to excuse myself and exit the dance floor, but Yasmine, as inebriated as I was, pulled me closer. I don’t know who initiated. Whether the alcohol blotted it out or my own subconscious wiped the memory clean matters little. What matters is that her lips were suddenly pressed to mine, and I kissed her with more emotion, more feeling than I had ever kissed anyone. The song ended, and a faster song started to play, but lost in our kiss, we were oblivious to everything else.

That’s when he noticed, and his rage erupted, reverberating throughout the bar. His scream echoed in my ear, and the force with which he pulled me away from Yasmine knocked me to the ground. The crowd swam around me. As if through a tank of water, I heard Don shouting at Yasmine. Yasmine, completely unnerved, turned her back on him, offered me a hand, and when I stood up, she embraced me. In defiance of Don’s wrath, she kissed me again. When my hands slipped up the back of her shirt, Don punched a wall, then dragged us both out of the bar.

Outside, he hailed a cab and shoved me and Yasmine into the backseat. Unperturbed, Yasmine pressed against me, her lips warm as we continued to kiss. I thought for certain that when the cab pulled up to her apartment, either she or Don would dismiss me, and I’d be left to walk home alone. But instead, the three of us stumbled up the steps together. When Yasmine opened her door, she nudged me inside, then barred Don from entering. Confusion clouded his face, then fury flashed in his eyes. She slammed the door, and his fist pounded the metal. “No,” he shouted, no doubt waking everyone else in the building. “You can’t do this. You can’t let her stay.”

Yasmine locked the door. Angry voices, shouting in Korean and spilling out of other apartments, eventually silenced Don. Without words, Yasmine and I fell onto her bed. Half dressed, we curled into each others arms. While I let her hands roam at will, fear prevented mine from going too far. What I wanted was wrong. My upbringing had taught me that. And so I stopped myself, content in the moment that I, not Don, was falling asleep beside her.

Furious, Don returned to Yasmine’s apartment early in the morning. This time, she opened the door when his fist smashed into it. Immediately, Don sighted me in the living room, crouched down next to Yasmine’s CD collection.

“She’s not a dyke, you know.” Breathing heavily from running up the stairs, his eyes threatened violence if I got too close.

Blankly, I stared back him, trying to process the meaning of his words, the meaning of my actions, actions I so desperately wished to blame on the alcohol. But now that I had sobered up, I didn’t exactly regret them.

I had kissed a girl. I enjoyed it. But what exactly did that mean? Why did it have to mean anything?

“Neither am I.” The label unsettled me, but as I sat there, my eyes uncomfortably locked with Don’s, I knew that he had shattered the last of my illusions.

“Yes, you are!” Don pronounced the words like a life sentence, and I stoically swallowed them, knowing that an appeal would be futile.

We glared at each other for another moment. I knew he would not back down, and I had nothing left with which to defend myself. Abruptly turning away and stepping past him, I smashed through the door and thundered down the stairs. Outside, the morning sun pulled me into a warming embrace, but wanting no comfort, I broke away.

In the shadows cast by a truth I could no longer deny, I cried.

Photograph at the top of the page was taken by Elizabeth Jaeger.