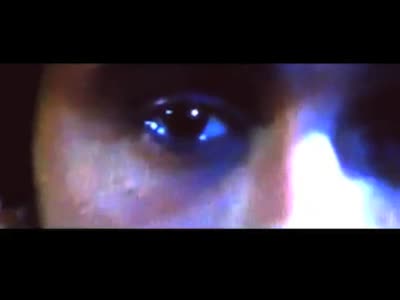 This projection exhibit sources F. Scott Fitzgerald’s famous novel, The Great Gatsby and the “eyes of Doctor T. J. Eckleburg,” Gatsby‘s iconic symbol of authority and wasteland in the novel. Robert Redford, Mia Farrow, and Sam Waterston star in the film directed by Jack Clayton in 1974, titled The Great Gatsby, a close recreation of the novel. 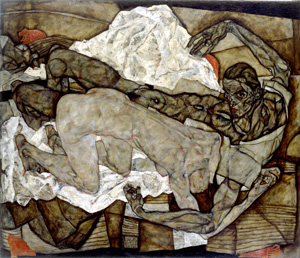 When visiting the Neue Galerie in NY, recently, for the Klimt Exhibition, I spent most of my time with Schiele’s Man and Woman I, a 1914 oil painting. This is my favorite piece in the Neue collection. You can lose yourself in the seamless movement, the gritty eroticism of what is so very Schiele. I find the supplicated woman particularly interesting. Her four point stance on elbows and knees. The man challenging the viewer. The form has something of a Cubist element but with a fluidity I never felt with Picasso‘s Cubist works. I prefer Picasso’s earlier pieces except for Aficionado. Aficionado is truly spectacular, intricate woven hues so that the brushwork presents a depth of perspective not seen in all of Picasso’s Cubism. I came to the painting after reading Hemingway’s The Sun Also Rises as a Humanities undergrad. Hemingway and Picasso go well together on many levels. I like the cross-sections of visual and textual. And I’d like to see more of it. I can’t help wonder who Schiele’s Hemingway is?