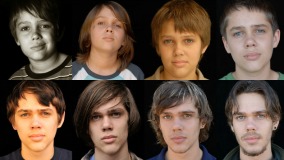 My father once remarked that there’s nothing sadder than the difference between a six year old and a sixteen year old. After seeing the remarkable film “Boyhood,” I have to agree. Written and directed by Richard Linklater, the movie was filmed over twelve years with the same actors, tracing a boy’s life from elementary school through his first day of college. Though fictional, “Boyhood” feels like a documentary—a study of the passage of time.

My dad was commenting on little children’s bright eagerness, which tends to get lost by the teenage years. But in the case of the titular character, Mason, Jr. (Ellar Coltrane), the boy’s development is one primarily of gains. As a little kid, Mason is at the mercy of the generally well-meaning, but often fumbling adults in his life. His mother, Olivia (played with utter conviction by Patricia Arquette), is loving and determined. But as she acknowledges late in the movie, she seems hell-bent on making as many bad life choices as humanly possible. A single mom, pursuing a degree in psychology and then a career teaching it, Olivia links up with “a parade of drunken assholes” whose approaches to fathering amount to bullying.

Meanwhile, Mason Sr. is the quintessential caring but irresponsible dad, swooping in for weekends at the ballpark or bowling alley, and swooping out when things get tough. And who better to play an aging musician with a cool car and a short horizon than Ethan Hawke? Hawke has made an art form out of depicting dreamers who chafe at growing up. It’s nearly magical to see him dragged, kicking all the way, from his thirties to forties in the span of two and a half hours.

While Mason Sr.’s aging process is a tradeoff between accepting responsibility and giving up freedom, Mason Jr.’s is a virtual declaration of independence. From the opening scenes, in which Olivia chides him for spending all day at school staring out the window, Mason struggles to march to his own drummer. That’s hard to do in suburban Texas, where even the photography teacher tells Mason his talent won’t get him anywhere. But with each passing year, Mason develops a stronger sense of self, an awareness of who he wants to be, what he will compromise, and what he won’t.

“Boyhood “is ultimately a hopeful depiction of growing up—an unprecedented movie that captures what it means to come into one’s own. Why then do I call the process it portrays sad? Because every moment that brings a child closer to himself exists for that instant and is then lost forever. It’s painful enough to experience that loss in real time. There’s something uniquely terrifying about watching it in fast forward, more than a decade condensed into a few hours. It’s become a cliché to call coming of age films bittersweet. But I can think of no better word for the expansive and sobering experience of “Boyhood.” 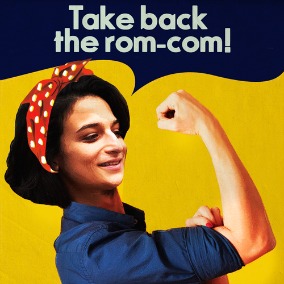 It turns out perpetual adolescence and the absurdity of the human body are key elements to this original, painfully funny film. Written and directed by Gillian Robespierre, “Obvious Child” mines some familiar territory of the creative twenty-something who can’t quite grow up.  By night, Donna bares her soul and sex life on stage as a comic at New York dive bars. By day, she works as a clerk at “Unoppressive Non-Imperialist Books,” borrows money from her hard-charging professor mother (Polly Draper), eats spaghetti dinners prepared by her doting puppeteer father (Richard Kind), and shops with her supportive, if self-righteous, pal Nellie (Gaby Hoffmann). It is not, as Donna might say, a grown-up lady’s life.

From the films “Jeff Who Lives at Home” and “Young Adult” to “Failure to Launch,” Hollywood has in recent years been fascinated by characters who inhabit their own personal Never-Never-Lands. There’s much to satirize in these anti-heroes’ self-absorption and shirking of responsibility. But while Robespierre—and Donna herself—poke fun at childishness, they also celebrate it. Sure, kids can be selfish and careless. But they are also relentlessly honest and uninhibited.

Despite the R-rated topics in Donna’s routines, she maintains a compelling innocence. Her jokes are harmless, even sweet—like a child discovering bodily functions—rather than the ugly and even violent comedy in many movies. (Why is every big-budget raunch-fest now compelled to include multiple jokes about prison rape?)  Most importantly, she is willing to be vulnerable. When she starts riffing about her Jewish features or uncontrollable flatulence, you believe her. That frankness creates true intimacy with the audience, both in the club and the movie theatre.

The question is: what happens when the “obvious child” is faced with an adult situation? For Donna, coming of age begins when she hooks up with Max (Jake Lacy), a straight-laced Vermonter like myself who is “so Christian he’s a Christmas tree.” After some serious drinking, outdoor urination, and dancing to Paul Simon (“Obvious Child” takes its name from Simon’s 1990 hit), Max and Donna have some fun with a condom, but fail to actually use it. The resulting pregnancy lands Donna at Planned Parenthood, scheduling an abortion for Valentine’s Day.

For Robespierre, the pregnancy isn’t really an issue of “choice” or “life;” the film operates in a world where the moral as well as the legal right to an abortion is a given. The question is not what decision Donna will make, but how she will deal with that decision. Can she grow up, while retaining her honesty and humor? What happens when your body becomes more than a gag? And since this is a romantic comedy, albeit a subversive one, will she get the guy?

There’s a political statement in making a movie about abortion that is patently non-moralistic. But more than politics or abortion itself, “Obvious Child” is about becoming an adult without losing your identity. When Donna is struggling, Nellie reassures her, “you are unapologetically yourself on that stage and that’s why people love you.” That’s the true moral of the story—and it’s a good one. Shamelessly funny, potty mouth and all, Donna isn’t limited by her mistakes; they are what make her. 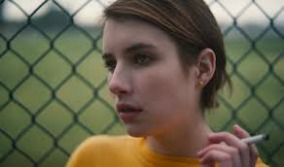 In “Palo Alto,” the ‘good’ kids smoke pot, have affairs with the soccer coach, and get arrested for hit and runs. The ‘bad’ ones, twisted by hard drugs and disturbing sexual experiences, all before the age of 15, teeter on the brink of pathology.

Based on James Franco’s collection of short stories by the same name, the film was adapted by Gia Coppola, the 27-year-old granddaughter of Francis Ford Coppola and niece of Sofia Coppola. In a new essay from the tie-in edition of Palo Alto: Stories (Scribner), Franco writes that while the stories are fictional, they are based on his childhood experiences in the iconic California suburb. As he grew up, the culture of overachievement at nearby Stanford didn’t rub off on him. He recalls, “Yeah, I got arrested. A lot. At the time I thought I was the unluckiest kid in the world, but now I see that all the trouble led me into the arms of art.”

The sensibility that art is born of pain and emptiness pervades every frame of the movie. “Palo Alto” shows teen angst at its most dismal. Much of the action takes place at night, with the familiar drunken fights and hookups playing out in dim houses, lonely streets, and even the local cemetery. While the shadows bring danger, the bleakness of daytime may be even more disturbing. At the wild parties or in the zooming cars, there’s at least a sense that something might happen, even if it’s something horrible. But when day breaks and the kids slump through their parents’ ritzy homes and school corridors, a dull haze sets in. Maybe it’s the fact that they’re still high (you could count the sober scenes on one hand), but without the self-imposed drama, there’s very little life in these young lives.

The leads, teens Teddy (Jack Kilmer, son of Val) and April (Emma Roberts, niece of Julia) have at least vague impulses toward something more meaningful. Teddy has an artistic bent and likes to draw. He paints skillful portraits of the elderly charges at the nursing home where he performs community service for a drunk driving incident, and shows the patients genuine care. His previous stint at a children’s library revealed a pull toward literature—that is, before he was dismissed because his friend drew genitalia on the storybook characters. Teddy’s crush, April, also possesses a certain gentleness, though beyond chain-smoking and soccer, it isn’t clear what interests her.

The young actors in the film are talented, but most of their skill is spent on pouts, scowls, or deadened stares. All that reckless anger is convincing, particularly when coming from Nat Wolff, who plays Teddy’s best friend, Fred. Wolff can flip on a dime from fits of screaming to mad-hatter cackling, though there is never any joy in the laughter. One snapshot of Wolff and Kilmer in a collection of set photos in Franco’s book shows the two smiling easily together—it’s a refreshing contrast to most of their moments on film.

“Palo Alto” is a teenager’s world; the adult actors function primarily either as nagging voices, a la the indecipherable “wah-wah” of Peanuts, or as peripheral star power. Val Kilmer has less than five minutes on screen as April’s doped-up step-dad, and Chris Messina, playing Fred’s equally doped-up father, appears in a single scene—though admittedly it’s a good one. Franco himself has the most significant adult role and is believable as a manipulative coach who clings to his glory days by flirting with his young players. In Franco’s new essay, he notes that “I felt uncomfortable embodying this evil character, especially when my allegiances were with the teenagers, but I also wanted to do everything I could to support the movie.”

It may be fitting that the director and main actors are Hollywood legacies. The characters’ jaded, old-before-their-time attitudes smack of child stars exposed to too much, too soon. But even in the hard world of show business, there are moments of innocent exuberance and excitement. Franco writes about Coppola’s ability to portray that split between dark and light. Before approaching her about the film, Franco went to a small show of her photography: “The photos had a sensibility that echoed what I was trying to do with my book. The perspective was a way of looking at teenagers through the prism of the fantastic: the cool but vibrant lens that Gia shares with her aunt Sophia, a way of looking at the mundane world of youth, giving that pedestrian existence the sparkle of dreams.”

It’s a fine sentiment that you can feel the movie grasping to capture. But while Franco and Coppola have nailed the mundane, the sparkle remains elusive. Even the kids recognize each other’s apathy. When Teddy accuses April of not caring about anything, she replies, “I do care…I care too much. But it doesn’t work.” The same might be said of “Palo Alto.”