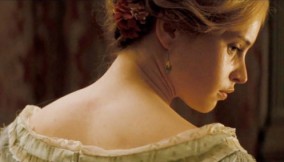 Early in “The Invisible Woman,” Charles Dickens (Ralph Fiennes) introduces actress Nelly Ternan (Felicity Jones) to his brood of ten children, a dizzying swirl of faces ranging from teenage daughters down to cherubic little boys. “And that is it…I think,” he says—then takes a beat before concluding, “And…of course, my wife.” The camera lands, with a thud, on the wide girth of Catherine Dickens (Joanna Scanlan). Her face, as flat as a pug’s, is the punch line and the audience chuckles. There’s a collective relief in the air. Oh, so that’s why he’s cheating.

Directed by Fiennes and written by Abi Morgan, “The Invisible Woman” is based on Dickens’s decade-long affair with Ternan, whom he met when she was just eighteen. The film’s statement about stifling Victorian double standards is overt. While the affair could cost Dickens a little bad press, it could cost Ternan her livelihood and reputation—her very identity. The sexual politics are familiar, but what’s more interesting to me, a 21st century viewer, is the demand for female perfection.

From the first moment we see Catherine, her body defines her role, giving us license to root for the mistress. In a later scene, Dickens opens his wife’s door to find her half-dressed and the camera, like the husband, darts back, embarrassed by the intimacy. Of course there are exceptions, but for the most part, movie heroines come in one size—Felicity Jones’s. And she is undeniably exquisite in the role; all the rose bud and snow white metaphors so popular in Victorian literature apply.

The “angel in the house” ideal, a pillar of Dickens’s time, has of course been pilloried in ours. Contemporary critics have often called Dickens’s heroines his one weakness: Amy Dorrit and Little Nell are patently sweet and selfless, but they won’t make you laugh like Mr. Pickwick does or make your skin crawl like Fagin will. It’s the quirks and warts that make his characters memorable.

So maybe it shouldn’t be surprising that Joanna Scanlan gives one of the film’s most nuanced performances. Her Catherine is initially played for laughs, but ultimately shows as much grace as her younger counterpart. The scene in which Catherine confronts Nelly about her relationship with Dickens is doubly painful because we feel each woman’s humiliation acutely. When Catherine warns, “you will find, you must share him with his public. They will be the constant and in truth you will never absolutely know which one he loves the most,” she shows a sharp human sensibility, even if she does not possess a literary one.

In the film’s interpretation, it is Catherine’s ambivalence to literature and Nelly’s love of it that distinguishes the women in Dickens’s heart—as much as their physicalities. Yet, he also expects an emotional perfection that even the bright and lovely Nelly cannot, in the end, deliver. Fiennes’s Dickens is warm-hearted, but not emotionally generous. He is too caught up in the delights of a perfect narrative to face the imperfections of a real woman.

As the audience, we’re not confronted with this distinction. Nelly’s emotional turmoil, which in real life could be difficult to navigate, only adds to her beauty on screen. The sight of Felicity Jones striding down the stark coastline, the grey waves rolling in, and the wind whipping her cheeks pink is one of the great pleasures of “The Invisible Woman.” The pain that plays on her face is near perfect.

The film’s title comes from the notion that Nelly is defined by her relationship with Dickens, a relationship that can never be acknowledged or seen. In life, she may have been an invisible woman, but in the context of the film, Nelly is the heroine—not an angel, but a more troubled, more deeply layered heroine than the characters Dickens wrote in her likeness.

When Kathleen Hanna’s punk band Bikini Kill released their first album in 1991, I was busy swooning to “(Everything I Do) I Do It For You” by Brian Adams. (My seventh-grade boyfriend and I had claimed it as our song after some intense hand-holding at the Kevin Costner version of Robin Hood.) Years later, I’m still utterly unschooled in the school of rock, and had never heard of Hanna until I saw a listing for “The Punk Singer,” Sini Anderson’s excellent new documentary about the third wave feminist musician.

For others who haven’t experienced Kathleen Hanna, she’s a tornado on stage: dark, gyrating, fierce, deafening. The grainy concert footage shows a girl with a microphone, pigtails, black bra, and “slut” written across her bare belly. Her lyrics are screamed as much as sung, and she’s in constant motion—jumping, stomping, grinding her hips, and pumping her fists. She orders men “back, back, back” away from the stage and uses her sexuality to challenge rather than entice. Even when the decibel level made me want to cover my ears, I kept my eyes trained on Hanna. Now, it’s hard to see how I missed her.

Personal ignorance aside, while Hanna became a cultural icon as the voice of the riot grrrl movement in the 1990s, she eventually faded from the public eye. As Hanna recalls in the film, she had no money for hotel rooms and was sleeping on friends’ floors during her tours, and yet she was getting major national press, including in USA Today and The Washington Post. The attention was not welcomed. Hanna claimed the media belittled her message of female empowerment and distorted her personal history, painting her as an angry victim of sexual abuse. In the film, Hanna draws a distinction between her father’s cruel, inappropriate behavior and incest. Looking straight into the camera, bright eyes bulging, she declares, “My father did not rape me.” Convinced she would never be covered fairly, she stopped granting interviews and refused to talk to the media. Reporters accused her of instituting a “media blackout” long before she retreated from public life in 2005.

Today Hanna is back in the news. She has a new band, The Julie Ruin, and a new album, “Run Fast.” In June 2013, The Feminist Press released The Riot Grrl Collection by Lisa Darns, a sampling of original zines, posters, and other printed material from the movement, with a preface by Hanna. Reviews of “The Punk Singer” as well as full features about Hanna have cropped up everywhere from Rolling Stone to The Huffington Post and Slate. There’s even a friendly interview with The Washington Post. Hanna is reentering the media she left nearly two decades ago.

It’s an opportune time. While “The Punk Singer” does not address current music other than Hanna’s, it’s hard not to draw a contrast between Bikini Kill songs and those currently topping the charts. Decades before they became popular, Hanna tried to reclaim the little girl as sexual object, sporting school-girl skirts and baby barrettes and bellowing out lyrics like, “I have no desire / I can’t feel a thing / I just want to make him happy / Daddy’s little girl / Daddy’s little girl / Daddy’s girl don’t wanna be / His whore no more.”

I won’t wade into the debate about whether Katy Perry, with her whip-cream-shooting bras and Candy Land videos (“So hot / We’ll melt your Popsicle”), is a force for girls’ empowerment. But I can’t help feeling all that childlike sexuality going on is designed to titillate rather than make a statement about exploitation. Leaving Perry aside, the Billboard charts have always boasted a lot of cliché, bling, and sex. Musicians and songwriters like Hanna are dubbed alternative for a reason.

“The Punk Singer” deserves attention outside the indie music world, particularly because one of its most compelling themes isn’t about music at all. Hanna stopped performing in 2005, when she left her band Le Tigre because of a serious case of Lyme disease. It seems particularly painful for a singer to lose her voice—and equally painful for a woman so determined to own her body to lose control of it. Years of treatment and the support of her (perhaps unlikely) husband, Beastie Boy Adam Horovitz, have allowed her to reignite her career. In “The Punk Singer,” she speaks movingly about forcing herself to rely on friends and family, something that hardly came naturally. While the music is still fierce, and the film ends with Hanna declaring that those who disagree with her should “get out of my way,” “The Punk Singer” is as much about building a community as raging against the machine.

I attended an 8:00pm Sunday night screening at the Sundance Theatre in West Hollywood. It was an appropriately female crowd—with more boy-crops and biker jackets than usual, even for the Sunset Strip. After the conclusion of the 80-minute film, director Sini Anderson Skyped in on the big screen, the faulty connection pixilating her friendly face into a giant, jumping Picasso. At least a handful of the women in the audience seemed to know Anderson personally and waved to the screen.

When asked how the film got started, Anderson explained that Hanna had approached her about working on a documentary about Le Tigre, but she was more interested in Hanna’s personal story. Anderson also noted that it was important to Hanna for the film to be a feminist work and to “keep it in the family.” But when a male audience member asked if Hanna had dictated that men not be interviewed, Anderson said that it was not true and in fact the story would have been incomplete without Horovitz’s unique perspective. (In addition to Hanna’s husband, her male doctor and a male band member appear in the film.) Anderson’s favorite part of the documentary, however, was Hanna alone in a living room, trying to come to terms with why it is she stopped singing. It wasn’t, as Hanna at first asserted, that she had nothing left to say, but that she physically couldn’t say it. Today, she can.