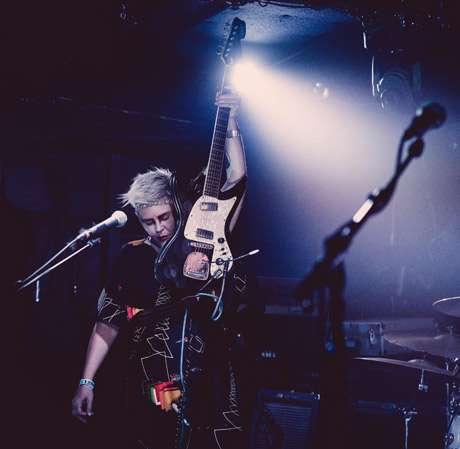 p id=”bio” class=”show-text”>Forged in the glowing embers of Washington DC following the 2016 election and subsequent Women’s March, the members of FuzzQueen are entrenched in the thriving DIY community of the nation’s capital. While keenly aware of the inescapably political nature of their locale, they coalesce around issues of social injustice and feminine power while also reveling in a “seething tension” that serves to both mirror and confront the political climate through sonic exploration. Following a stint in California, frontwoman Erin Frisby returned to DC with husband and bandmate Chris Stelloh. Reuniting with their longtime friend and drummer Ben Tufts, and adding the bass talent of Clinton Cole, the band shed their former Americana aspirations in favor of a more urgent, visceral project. Drawing from the energy of bands like Fugazi, Queens of the Stone Age, and PJ Harvey, FuzzQueen filters raw energy through compositional complexity and Frisby’s operatic training. Although rooted in the current social climate, forthcoming single “Ribbons & Flowers” exudes a more primeval energy. Deftly melding ideas of femaleness with environmental awareness, the song exists in the present but alludes to something more ancient. Combined with their affinity for community engagement, the band taps into a collective power that serves both to heal and embolden.