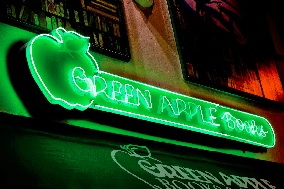 Publishers Weekly, familiarly known in the book world as PW and “the bible of the book business,” is a weekly news magazine focused on the international book publishing business. It is targeted at publishers, booksellers, librarians, literary agents, authors and the media. It offers feature articles and news on all aspects of the book business, bestsellers lists in a number of categories, and industry statistics, but its best known service is pre-publication book reviews, publishing some 8,000 per year. Each year for the past twenty-two years, PW honors one independent bookstore as Bookstore of the Year. This year, of the eighteen bookstores nominated, five have been named as finalists and the winner be announced during the BookExpo America held in New York City at the end of May.

Pete Mulvihill, co-owner of Green Apple Books in San Francisco, tells us about all of the expansions of the bookstore throughout the years, the success of California Bookstore Day and how to adapt when the universe bestows upon your bookstore some bursting pipes.

The Doctor TJ Eckleburg Review: What is the history of Green Apple Books?

Peter Mulvihill: The store was founded in 1967 as a small bookstore with just used books (750 square feet). It grew and expanded and added new books over the years. The last major addition was the annex (two doors down from the main store) in the late 1990s. That brought us to about 8,000 square feet and really bumped us from “neighborhood” bookstore to “destination” bookstore. The three current co-owners bought the store from the original owner in a ten-year buyout, concluding in 2009.

TJE: What challenges have you come across in running an independent bookstore?

PM: Well, in my 20 years, there have been external forces: discounting chains, superstore chains, Amazon selling new books, Amazon selling used books, eBay, eBooks, etc. And internal challenges: a unionization in 1992, a sewage leak from a neighboring restaurant under our floor, burst pipes during rainstorms, and so on. We’ve always done our best to adapt. TJE: What are some successes and surprises you have had throughout the years?

PM: I think 2014 is our most exciting year thanks to three things: California Bookstore Day (an effort we helped spearhead) was tremendously successful here at Green Apple, and a ton of fun. Better still, it was successful at most of the 93 other participating stores; it’s gratifying to be part of something that lifts all boats. And the PW honor is a high point, of course. And we’re preparing to open a new store this summer. As for surprises, there’s the guy who dropped dead in the Military History section, the many marriages that have occurred between staff here, the generosity of a disabled architect who made us the coolest store map for free, and interesting books and people too numerous to name.

TJE: What is your bestseller of the year so far?

PM: Guest Cat by Takashi Hiraide, largely because it was the January pick for our Apple-a-Month fiction subscription program, but also because a few booksellers here love it and hand-sell it.

TJE: What are some of the events you have hosted?

PM: We’re still glowing from CBD (check out these photos to see how much fun the day was); it was our busiest day ever that was not within a few days of Christmas. Beyond that, we had a great event with Allie Brosh last fall; she’s a gem. And all three owners were at the same reading a few months for the first time as we hosted Willy Vlautin (we have man-crushes on Willy and love his novels). I personally loved getting to meet Tom Drury last fall; great writer, nice guy.

TJE: If you could have any two writers collaborate on writing a mystery novel, who would they be?

PM: Hm. I think maybe Thomas Piketty and Cormac McCarthy. I like my mysteries dark and rife with economic policy insight.

PM: We’re really grateful that we get to do this for a living. The several hundred people who walk in every day and buy a book (or a journal or LP or magazine) reinforce our faith in humanity.