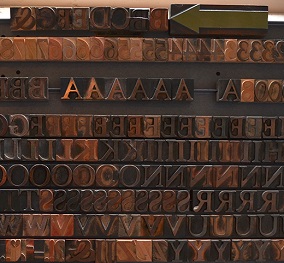 In 1990, Julia Seko and Brian Allen led a resurgence of interest in the book arts. In particular, they were interested in the mechanics, meanings and preservation of the Eaves pressroom. A Denver physician, Dr. John Evans, and his wife Thelma had a love and appreciation of Persian art and poetry. This admiration led John and Thelma to Boulder where they would befriend an Iranian scholar, Mehdi Nakosteen, who was The University of Colorado’s director of publications. This group of friends started meeting at John’s house in order to discuss not just their love for the written word, but for the actual books themselves. At these gatherings, John would show his friends his intricate letterpress, and the guests would also look at his wonderful book collection. Thelma, too, showed the group her own involvement with making books. She gave demonstrations of her binding techniques. Eventually, John and Thelma started printing Mehdi’s book Dust and Destiny.

Before the book could be completed, however, John died in 1967. Close friends of John’s wanted to keep the press going, but found it difficult and time-consuming. After four months, they  decided to move the letterpress to Boulder where Este Es Press could have a home at a university.

From starting around the 1970’s and until 1996 many successes and challenges occurred to Este Es Press. After the press equipment was donated to University of Colorado’s Norlin library, there was an upswing of success—enough so that the Colorado Typographical Society was born. The Este Es Press continued to publish books until Mehdi, who had become the leader of the organization, died in 1982. After a year of dormancy, Nora Quinlan became head of Special Collections at Norlin. Her interest in rare books and letterpress printing led to the creation of the Eaves Press, named for its location under the eaves of Norlin’s third floor.

Around 1990, Julie Seko and Brian Allen led a resurgence of interest in the book arts, particularly the operation of the Eaves pressroom. This led to the formation of the present organization, the Book Arts League (BAL). Allen served as the League’s first president.

In 1996, Norlin Library decided it could no longer house Eaves Press. Concerned that the Eaves equipment might be disposed of, BAL reached an agreement with the University in which the League assumed ownership of the Eaves Press collection and moved it into storage. Operating under the auspices of Friends of the Libraries, BAL continued its educational and creative activities during the multi-year search for a permanent home. Interested in this organization and the world of book arts, I interviewed Seko in order to learn more. CC: What does the Book Arts League do?

JS: Our mission statement says it best. BAL is “a nonprofit community arts organization working to preserve the historic tools and crafts of the book arts, including printing, typography, bookbinding, and papermaking, from which spring the literacy and communications technology on which modern society is built.”We offer workshops, lectures, open houses, outreach, and other activities that promote the book arts.  We also collaborate with other book arts/arts organizations and local groups to bring special events and artists to the area.

JS: Over the years we have had classes in letterpress printing, bookbinding, western and Asian calligraphy, book repair, artist’s books, paper marbling, and paste papers.

CC: What are some of the ways a book can be restored?

JS:  The League regularly refers people to local professionals and places that provide this service.  We also keep in touch with other groups, like the Rocky Mountain branch of the Guild of Bookworkers. We’ve also had a class in basic repair, prompted by a request from the public.

CC: What are some of the different forms in which a book can be bound?

CC: What are some of the most interesting books you’ve seen over the years?

JS:  Of the books I’ve personally encountered, a few are Firedogs by Ken Campbell, Fluxus 1 by George Maciunas, Dr Strange comics illustrated by Steve Ditko, Songs of Innocence and Experience by William Blake, Silence by John Cage, and Arm in Arm by Remy Charlip.

CC: If someone was interested in learning more about book arts, what steps would she need to take in order to become involved with a book arts organization such as yours?

JS: We list workshops, open houses, and other activities on our website—all are open to the public and many are low cost or free.  Come and meet us.

Julia Seko has been involved with books for most of her life.  She has worked in book publishing, been a technical editor and freelance editor/proofreader, and she also works in a university library.    Her earliest bookmaking efforts were collaborative scrolls of butcher paper demonstrating the “speed of cheese” and a flip book of a figure jumping off a cliff. She is a letterpress printer and book artist and prints odd things out of her letterpress shop PS Press.  She teaches letterpress printing through the Book Arts League and at Naropa University.