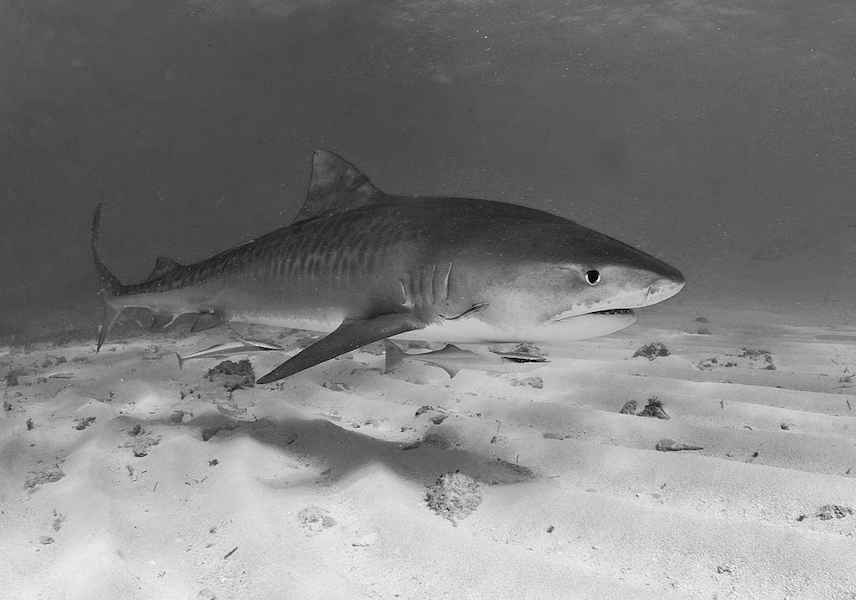 Just south of Sarasota, I told the lady sun tanning on the blanket there was a shark out there in the water. It was true. Big shark. Two body lengths, shadow grey, cruising like a tank beneath the surface. “There can’t be any sharks out there,” the woman said. Some lady in a swim cap. One of the timeshare occupants from across the street. Not my grandmother’s friend – they hate each other, all the timeshare tenants. They can’t stand each other’s one-piece bathing suits with the fake skirt. They can’t stand each other’s varicose veins. Each thinks the other is polluting their landscape. “A big shark,” I repeated.

“You did not see a shark,” the lady said again. “You saw a dolphin.”

Hey, I wanted to tell her — I got no skin in the game. Me, it’s nineteen eighty-five, I’m fifteen going on twelve. I could care less if that thing goes on a tear.

“I’ve seen dolphin,” I said instead. “That was no dolphin. That thing was a fish. That thing swam with malice.”

“How does a fish swim with malice?”

“Did it have a dorsal fin?”

“They all have dorsal fins.”

“Not sharks,” the lady said.

“Was this one straight?”

“Then you saw it wrong.”

“The tail fin stuck out of the water, too.”

“It couldn’t have been a shark, anyway,” the woman said. “They got a shark patrol.”

I tried to explain that shark patrols don’t repel sharks, but they have shark patrols because there are so many sharks. “Do you understand that concept?” I said. “You see the connection?”

“The shark patrol doesn’t follow them around,” I said. “The shark patrol exists because there are millions of sharks off the coast of Florida. A coast with the most unprovoked shark attacks in the world. Hammerheads, lemon sharks, bull sharks, black tips. There are so many sharks that if they didn’t have a shark patrol then nobody would go in the water.”

The woman asked, then, why people were in the water?

“Well, did the shark show up?”

“It’s right there,” I said, pointing towards the water, where it had by now disappeared.

“So,” she said. “Should we close the beach? Should we call the police? The TV news? What do you suggest? Do we call the shark patrol?”

“No we should not,” she said. “Because it could not have been a shark, because they have a shark patrol.  Don’t you know that?”

And then she got up, with her nylon tutu. The way she walked, I couldn’t tell if she had had a stroke in previous years, or if she was just old. She approached me with all her wrinkles and leather. “Do you know what I think?” she said. “I think you are the saddest little boy I have ever seen.”

Photo at the top:  “tiger shark“by AlKok is licensed under CC BY-NC-SA 2.0.

Tim Fitts lives and works in Philadelphia with his wife and two children. His stories have been published by journals such as Granta, The Gettysburg Review, Shenandoah, Apple Valley Review, New South, The Baltimore Review, among many others. He is the author of two short story collections, Hypothermia (MadHat Press 2017) and Go Home and Cry for Yourselves (Xavier Review Press 2017). He serves on the editorial staff of the Painted Bride Quarterly and teaches in the Liberal Arts Department of the Curtis Institute of Music.