—By transforming your body, I make it mine, he tells Nes.

The temperature is always pleasant in his place, even by the end, even when winter surrounds their world. The sun falls through the glass roof and onto her head. It warms the air in which her body waits. Upright, her feet a little apart, and naked, no matter what the season and for eternity it seems. Nes doesn’t mind the waiting. When it’s overcast or darkness seeps in, Vincent lifts the electric heater onto the podium. Goose bumps are taboo; her skin must be smooth and even. Last summer, he cracked open the windows for a breeze and let two fans chase away the heat. Her sweat, too, is his enemy.

But it’s fall now, early fall in Amsterdam. Mist hangs over the canals. In Vincent’s atelier of red-baked bricks, they are timeless and alone.

—Close your eyes, Nes, and don’t move. I want you just the way you are.

She does as she’s told, withdrawing into blindness. He circles her like a stray wolf, excited and patient and barely making a noise. She can sense him everywhere. His breath on her neck, his sweat in her nostrils, the warmth of his hand radiating onto the small of her back. Vincent never touches her with his fingers, not while she’s on the podium, not when he’s at work. He only uses a brush. Stroking and dabbing.

How close he is. If she were less cooperative, she could make him touch her by merely shifting her hips.

In the morning, before he begins, her skin is white, cloud-bred, with only a cluster of freckles on her nose and two lonely moles on her left shoulder. His skin is the reverse, sun-fed and amber. Nes and Vincent play at being opposites. Her body fragile, his resilient. She weak-willed, he headstrong. It’s a game. Unreal. The master and his model. She shivers as he blows the smoke of his cigar into her ear.

—Lift your arms. Higher. There you go.

Nes tries hard. Always. It’s normal to try hard when you’re a team. Her body is his canvas. Liters of water she drinks a day, carefully, not spilling a drop, so her skin will stay elastic. She pees behind a curtain and into a green bucket — his toilet is outside, too far, and anyway, she can’t let her thighs touch the seat. Although her eyes often burn from the paint, she never cries; tears would ruin his work. It’s true, she tries hard even when it doesn’t matter, even when she doesn’t comprehend why Vincent wants everything his way.

No music. No questions. No breaks. Standing on the podium, her eyes closed, she listens to the sounds from the city. Bicycle bells. The rumble of trucks. Sirens and voices punctuated by heels, the occasional bird. She likes the drumming of rain on the roof, the forlorn drip of water. The rain reminds her why she is here.

—Western civilization is an aberration in the history of Homo sapiens.

Painting her body, he speaks with certainty, vibrates with it. His voice carries the threatening ring of prophecy. As far as she knows, though, Nes is his only acolyte. The world doesn’t agree with Vincent. Refuses to pay. Negates his art. Kills him all the fucking time. The Dutch are cheap Calvinists who force their artists to die in disgrace. Rembrandt. Van Gogh. Vincent, her Vincent, should have crossed the Atlantic like De Kooning. Here, in the myopic North, in his atelier, he paints his own horizon and travels without ever taking off.

—The world rewards obedience and service. You have it easy, Nes.

They should bother her, such words, she knows they should bother her tremendously, even though it’s just a game. Genius and canvas. Opposites. One ad in the paper, ARTIST SEEKS MODEL, after which she found herself leaving her room for the first time in months.

—Don’t look! I told you not to look at yourself. Are you deaf?

She closes her eyes. Vincent doesn’t expect her to reply. Communication requires an equal.

Nes has collected regrets all her life, like others collect art. Mistakes, betrayals, losses. She has indexed everything in photo albums and diaries that fill up shelf after shelf. Her collection testifies to her fragility: she’s not strong enough for the outside world. If she doesn’t keep herself hidden somewhere deep inside, this cruel and indifferent world will break her down.

Now observe what happens in Vincent’s atelier, see how his singular attention affects her. Her skin, his canvas. Consider the yielding of her flesh, how well it conducts his passion. While he paints and she stands, they cross the border between them, his and hers. Watch as he draws her out. His brushes tickle her ass and shoulders and cheeks, and slowly, she floats to the surface, starts to live on her skin, the only place where they can be together.

He’s done with her now, on this sunny afternoon in early fall. Vincent places a full-length mirror on the podium, antique with a gilded frame, and commands her to open her eyes. This is how she views his work, as a voyeur through a reflection. It would be too dangerous to stare at his art directly; it may turn her to stone, etcetera.

She looks in the mirror unappreciatively. An overload of yellow today, some blue. Minimalist stripes that should be easy to scrub off later. Vincent is having a Mondrian phase she doesn’t care for. Once he gave her the back of a Friesian cow, black and white, then covered her legs in green. She liked it most when he painted her night-blue, from feet to crown, then decorated her with stars. Her Vincent. When he shaved her head, she didn’t object.

—Do you see, my love? I’ve made you mine. Now, I can share you with the rest of the world.

Vincent brings out his camera to eternalize his work. Despite her fatigue, Nes turns and winds. If she doesn’t strike the right pose, the shoot may take hours.

It has happened that his paint stayed on for too long and burned her skin, making it peel and blister. Metamorphosis, Vincent called it. Poisoning, the doctor said. Skin is porous and blood absorbs everything. Nes, however, never protests. Her compliance is part of their game, like his surrender, afterward, in her arms.

Following the shoot, he soaps her limbs, one by one, lovingly. Rinses her. Creams her skin. Carries her to his mattress on the floor. His body stiffens. Her bones liquefy. Their movements are random yet precise, the creator uniting with his creation. Vincent sweats excessively, working hard. He wants his flesh to give her satisfaction. Again, it’s part of their game, his confidence, her ecstasy. She never tells him that inside of her, he’s only half the man he is when on her skin.

In the morning, the lover is gone and the painter gives Nes her fee. The payment makes her feel cheap and used and curiously free. Then Vincent sends her home, where she waits, permanently on call, until he needs her again.

At the beginning of winter, the sun blurred and weak, she stands on the podium as usual when Vincent, the painter, touches her with something other than a brush. His tongue pushes into her mouth and his thumb disappears between the lips between her legs.

Yes. She wants him inside of her and on her skin, simultaneously, here and now.

Her eyes flash open and she wraps her crimson arms around him, pulling him close. She’s ready to taste life again, for real, one more time. He curses and jerks free. Below the blackish hair, his gaze is cold like dirty snow.

He points at the red smears on his body. Her chest tightens: something breaks, is already broken. There’s such disgust in his eyes.

She defies him. The red paint on his chest should have been blood. She spits on the floor near his feet, and there it goes, her hand flies out. He ducks and seizes her wrist, but when she tries to bite him, he releases her and backs away. She kicks over the green bucket. Her urine spreads over his podium, saturating the wood with her smell.

—What the fuck, Nes.

He steps away from the puddle moving toward him and challenges her with his eyes, trying to rein her in. Her bitterness, however, only gives way to contempt.

—Where’s your genius, now, Vincent? Look at you, a painter without his canvas.

Indignation shoots across his face. Good. She’s hit a nerve. She climbs down from the podium and tears the prints from the wall. Enlarged photographs of her former selves, his transformations of her. Vincent protests behind her. She rips the prints to shreds and tosses the pieces up in the air like confetti. They have ended their game. A celebration is in order.

She turns and watches Vincent cry as his/her paper bodies scatter to the floor. 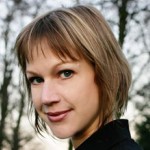 Claire Polders is a Dutch author of four novels with a debut in English on the way. Her short prose appeared in Denver Quarterly, TriQuarterly, Green Mountains Review, Okey-Panky, Folio, Tin House (The Open Bar), Prairie Schooner (Blog), and elsewhere. You can find her at clairepolders.com.