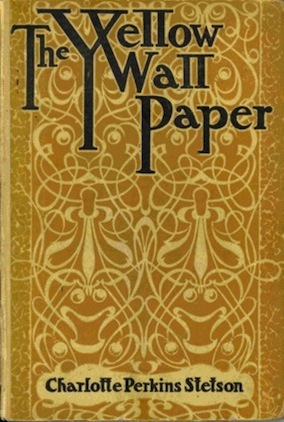 Gilman’s Women and Economics: A Study of the Economic Relation Between Men and Women as a Factor in Social Relations (1898) became a best seller and made her one of very few commercially successful women writers.

Charlotte Perkins Gilman was born on July 3, 1860 in Hartford, Connecticut, the daughter of Mary Fitch Westcott and Frederick Beecher Perkins, a librarian and writer. She was an intense promoter of women’s suffrage and argued in speech and print for women’s social and economic independence. She wrote a number of acclaimed works of fiction and non-fiction including poems, plays, essays, critiques, short stories and novels still studied today for their relevancy.

Gilman attended the Rhode Island School of Design and subsequently taught art and designed greeting cards. She married a fellow artist, Charles Walter Stetson, in 1884 and had a daughter in 1885. Gilman entered a sanitarium in Philadelphia in 1887, suffering from depression and neurasthenia. Dr. Silas Weir Mitchell (alluded to in “The Yellow Wallpaper”) prescribed a `rest cure’ that discouraged physical or intellectual stimulation and emphasized living ‘as domestic a life as possible.’ After trying this oppressive regimen for three months, Gilman refused to continue, separated from her husband, and moved to California around 1888. She became involved with social reform and feminist groups, and her resulting national and international presence made her an historical figure as well as a literary figure.

In 1900, she married her cousin George Houghton Gilman, a lawyer in New York City. In 1932 Charlotte was diagnosed with inoperable breast cancer, and by 1934 she had moved back to California. Her husband died suddenly in 1934, and she died in late 1935 by a self-administered overdose of chloroform.

“The Yellow Wallpaper” (1892) is a first person narrative of the descent into madness of a young woman:

“There are things in that paper which nobody knows but me, or ever will. Behind that outside pattern the dim shapes get clearer every day. It is always the same shape, only very numerous. And it is like a woman stooping down and creeping about behind that pattern. I don’t like it a bit. I wonder—I begin to think—I wish John would take me away from here!”

In “Why I Wrote The Yellow Wallpaper” fifteen years later, Gilman explains:

“When the story first came out, in the New England Magazine about 1891, a Boston physician made protest in The Transcript. Such a story ought not to be written, he said; it was enough to drive anyone mad to read it.”

“Another physician, in Kansas I think, wrote to say that it was the best description of incipient insanity he had ever seen, and — begging my pardon — had I been there?”

“Being naturally moved to rejoicing by this narrow escape, I wrote The Yellow Wallpaper, with its embellishments and additions, to carry out the ideal (I never had hallucinations or objections to my mural decorations) and sent a copy to the physician who so nearly drove me mad. He never acknowledged it.”

When we consider a work of magical realism, what is actually happening in the Newtonian physics-based world is usually called into question, and the pivot of the story is often contingent on the acceptance or resolution of the ambiguity between one or more working perceptions inside individual characters and inside individual readers. Are there forces at work outside the sensory perception of humans?  Or is there just a lot of energy being expended resolving the differences in perception that is being formed in the mind as the brain processes the sensory inputs?  To have a “beholder” linger over such questions is one many writers and artists seek as objectives.

The concepts of the “beholder’s share” and the use of ambiguity in art and literature are well developed—along with the recent advances in the sciences of the mind and the brain—by Nobel Prize winner Eric Kandel in The Age of Insight: The Quest to Understand the Unconscious in Art, Mind, and Brain From Vienna 1900 to the Present. These notions and this science are useful tools for decomposing magical realism.

In her article about why she wrote it, Gilman removes any ambiguity about her intent, reinforces her activist stances, and makes it clear she meant it to be disturbing enough to make readers linger over it.

“It was not intended to drive people crazy, but to save people from being driven crazy, and it worked.”

In 1994 Gilman was inducted into the National Women’s Hall of Fame in Seneca, New York.

Charlotte Perkins Gilman. “Why I Wrote The Yellow Wallpaper,“ The Forerunner October 1913.

Eric R. Kandel. The Age of Insight: The Quest to Understand the Unconscious in Art, Mind, and Brain From Vienna 1900 to the Present. New York:  Random House, 2012.

Richard Perkins is a recent graduate of the Johns Hopkins University MA in Writing Program.  He is working on an historical novel and is revising a collection of connected stories and a novella.