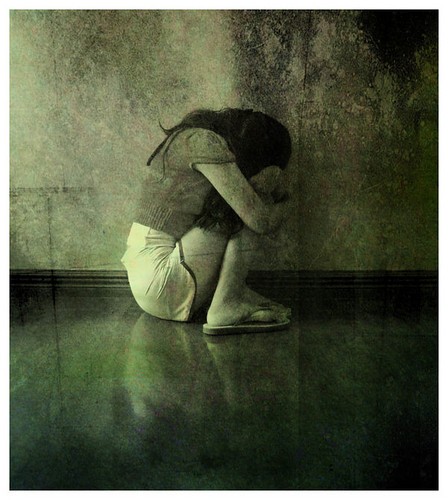 I tried to file my taxes earlier today, (yes, it’s August, and yes, I still haven’t filed them), and failed horribly. Between forgetting passwords, lost filed taxes from last year, (filed in July), the amount I know I’ll owe, and my lost PIN number (what the hell is it?), I was defeated and overwhelmed by the process. Failing at the task made me feel ugly.

My hair felt scraggly, my jeans kept falling off my ass, and so my ridiculously pink underwear was showing. Just yesterday a little girl — about four years old — commented on this fact. I was unloading boxes of books from a truck, and instead of admiring my womanly strength, the little anti-feminist wandered over and said to me, “Your underwear is showing!” To which I replied, “It happens.” And then she said, “It shouldn’t.” And now the failed task of filing my taxes emphasized the ugly, made me take the frustration out on myself, and I think I’m ugly as my pants slip down a bit further.

I’m sitting at a coffee shop trying to figure out this taxes mess, and my friend walks in and slams her bag down on the table. “Dude! You’re computer!” I shout, not wanting her to break her lifeline. “It’s not in my bag. Someone stole it out of my apartment.” Ah, yikes. We’re two writers, the computer an essential element to how we justify our lives spent hours in coffee shops instead of doing something like a real job, and now her precious instrument has been stolen. I grimace with her and ask her how she’s doing. “I’m very cross.” Reasonably so.

She’s got a novel she was working on on that computer, now gone. I stare at my own computer, feeling guilty that I have it. Her stolen computer news distracts me for a bit from how I’m lost in numbers that don’t make sense and how I’m not able to find my W2s from the eight jobs I worked this past year in three different states. It’s a gray day outside, the Minnesota summer giving up on itself early, and the gray depresses me more, makes my pants slip off my ass just an inch further. “Let’s have a smoke,” my friend yes. “Yes, let’s,” I agree, feeling like killing myself just a little bit more is the best idea that has ever been proposed.

We go outside for a smoke break. On the street parked outside of our coffee shop is a black hearse, an unusual car to be found on this busy city street. We both spot the death car as we walk outside, and at first nothing is said. It fits in with this gray day, with our moods that are drowning downward as fast as my pants are falling off, as quickly as my self-esteem drops down to my ankles. Our smoke break conversation erupts quickly as it always does, breaking away from the mess inside of our heads as we chatter away, trying to avoid what’s been stressing us the hell out that day. I push back my scraggly hair from my face, hitch my pants up a bit, and breathe in the wonderfully toxic smoke. There is a slight break from our ranting as my friend looks at the hearse, looks at me, looks again at the hearse, and says the only thing that has made sense to me that day.

And I snort at this. And in this moment I don’t care about my pants, I forget about the little anti-feminist who basically implied my ass was ugly as it hung out in the air yesterday, and I know I’ll put my taxes off for another month. Because, why the hell not? Because I can, because avoiding them somehow makes me feel like I’m in charge. And while, yes, I do feel like that hearse is for me, I know however stupid and ugly I feel right now that the hearse is not, in fact, for me, because I have been saved from the tax situation that makes me want to die by a friend who can get me to laugh, by someone who makes the gray day feel not as gray on my mess of a body, this lump of flesh I have to lug around with me each day as I continuously attempt to live like an adult, like a person who files her taxes on time.

Chelsey Clammer received her MA in Women’s Studies from Loyola University Chicago. She has been published in THIS, Stone Highway, Atticus Review, Sleet and Make/shift among many others. Her essay “BodyHome” received the Editor’s Pick 2012 Award from Revolution House. She is currently finishing up a collection of essays about finding the concept of home in the body. You can read more of her writing at: www.chelseyclammer.wordpress.com.

One Reply to “Life: Fail”