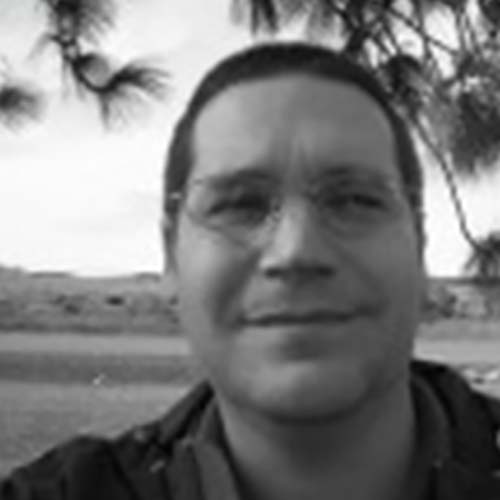 It hadn’t been solid. She tried turning and leaving. Step and tremble. Curled toes anchoring to the floor. She made a fist until knuckles whitened, fingernails threatening to break palm-flesh. One and done. No. Not one and done.

Her foot breached the threshold. She hunched shoulders and tsked. Maybe it would be six and fixed today. Or eight is great. Maybe ten and then . . . Then thirteen more doors. Perhaps, after, a trip outside.

“Where are you?” Whispers.

Gone — husband, son, daughter. Photos blurred like on television, concealing identity. For a time it had all stopped. The knocking, the invisible lines, gone. No more turning on and off the faucets. No more covering the mirrors or the photos. She discovered structure in no compulsion, an attempt at staving off. Then, the black car. Them.

I don’t want any visitors.

They walked up the footpath and knocked on the door.

Go away. Please. Fingers picking, self-cannibalizing like mandibles of a mutant insect-carpal beast.

Through the dining room window, them, difficult to make out their faces. Knit shirts embroidered with the same company logo.

“…worth the time investigating…” “…cold case…” “…drafts and knocking pipes…”

She curled toes. Agreements. Yes. Promises. Yes. Papers filed and signed. Had she? Commiserations. At least she had the house. There was that.

Outside, the little stone footpath, sun and breeze and fresh air. So what if the yard lay unkempt?

A line of ants crossed, and her shoe touched their invisible track. They followed the chemical trail with such amazing formic fastidiousness. She traced their line back to a dead mouse — its eye sockets a sunken mash, fur tufted from bloat and decomposition. Ripe.

She closed and opened the front door five times. The old crystal doorknob rattled. The ants marched to and from the mouse’s corpse. God, fresh air.

What if the door won’t open, stuck outside, and the breeze caught just wrong? The metal doorknob might be magnetic or a glue. Ragged claw-things across the psyche.

She wandered through the house and willed herself out of mirrors and pictures. She scrubbed at the blurred faces in the photographs. Too many crystalline doorknobs smudged. First a general buffing then a swipe and tiny back-and-forth of each facet.

Movement outside the window, them, pausing on the sidewalk in front of the house. A camera, a camcorder, a survey of the property. She could go to them. When was the last time she talked to a neighbor or said hi to passers-by?

Today had to be the day when the compulsions took a break, no invisible lines, and the ants didn’t matter, and it only took four — four! — attempts to close the front door.

More FOR SALE signs. Every other lawn could use a trim. She passed rippling through the dapple-shadows and dust-coated bars of sunlight leeching through live oaks along the street. She’d made it a block before the black vehicle.

The vehicle turned onto the street a few blocks down and she turned and walked home, not looking back. Home again. She shut the door and opened it. Home again. Slammed the door. Home. Slam… On a nail, the old rusty thermometer rattled against the warped, weather-cracked column.

They were coming up the walk. “Who knows?” “…told them we would check it out…”

She vanished into the coverts of the house.

Faces no longer blurred in the photos and she flung back the sheet from a mirror. Staring through herself.

Fourteen doors to knock upon. All the doorknobs to clean.

She could offer to help. She monkeyed with the faucets. What would they think if she couldn’t close the door?

The kitchen. Come in.

The foyer. Come in!

She opened the door. She studied the blurred faces, and she eased aside. And as they entered, she drifted past.

Berrien C. Henderson lives in the deepest, darkest wilds of southeast Georgia with his wife and two children. He teaches high school English, is a long-time martial artist, and has a big geeky spot in his heart for literature, speculative fiction, and comic books.

One Reply to “Blur”