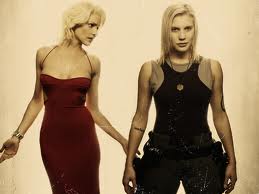 I am late on the “Battlestar Galactica” frenzy. Almost four years past its finale, and I’m only on season three, still waiting to find out if they ever find earth. I have a theory that if they do, they will find out they are miniature people, the size of rice, Liliputians. And the raiders will be as harmless as flies, and the battlestar will merely be the length of a stick.

I keep having sex dreams about Number Six. Though last night I had a dream that a cylon centurion shot my husband in the head. I do not think the two are connected, that I’m trying to kill off my current bisexual identity in order to slip back into the lesbian one. It’s simply a very vivid show, one that sticks to your brain. And Six is sexy, and the centurions are scary. My husband watches three episodes with me each night, sometimes five. Thank the gods for Netflix Instant Play.

I put up posts on Facebook about what I’m watching, and my friends vow to not ruin the ending for me. They know how much that would suck. I know they have a lot of critiques of the show, that there’s even a book called Battlestar Galactica and Philosophy. There’s much thinking to do in relation to this show about the pursuit of human rights, about what sorts of knowledge humans can own, and how politics and military fit into all of this. Government power verses civil rights. Union struggles. Post 9-11 critiques on terrorism. Separation of church and state. But this is not what I’m interested in.

I do not know why I’m obsessed with this show. I have never liked the military, never enjoyed watching Science Fiction (with the exception of “The X-Files,” because Gillian Anderson is hot), and politics has never really been my thing. Perhaps it’s about Starbuck, or of wanting to see Admiral Adama and President Roslin finally, like for realsies hook up.

I feel like a teenage girl watching this show, cheering for the pursuit of the relationships rather than the actual plot. Who cares if they find earth as long as Lee and Starbuck finally find each other.

I have learned many things from BSG. They are: that paper does not need to be square, that enemies can actually be semi-trusted, that the law system may be corrupt, that organized unions are important, that the Secretary of Education is forty-third in line for the presidency, and that prophets might not be delusional (though they are most likely on drugs). I have also learned that with the right voice, rhythm, and timbre a man in charge could read the ingredients off of a cereal box, and it would still sound inspiring. And that even your favorite people can die. Or gain weight.

And that I am attracted to blondes.

And that frack is the best word ever.

So say we all.

Chelsey Clammer received her MA in Women’s Studies from Loyola University Chicago. She has been published in THIS, The Rumpus, Atticus Review, Sleet, The Coachella Review and Make/shift among many others. She received the Nonfiction Editor’s Pick Award 2012 from both Revolution House and Cobalt for her essays “BodyHome” and “I Have Been Thinking About,” respectively. She is currently finishing up a collection of essays about finding the concept of home in the body. You can read more of her writing at: www.chelseyclammer.wordpress.com.