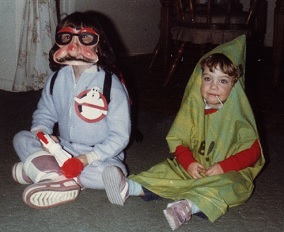 When did this happen? When did our culture decide that Halloween was just a reason to dress up as a representation of something in as little clothing as possible?

When I was a kid, my mother came up with some killer costumes. Mime, Tooth Fairy, Pinnochio, Ghostbusters.

But wait. If I were to dress as any of these nouns now, I would be expected to look like this:

And what if I decided to be a dead basketball player again? I mean, really, which do you think looks better: (Maybe I don’t want you to answer that).

And I think back to when I was a kid. To when it was so fun that one Halloween when I was with my neighborhood buddies—none of whose names I can remember now—and we dressed as Snow White (okay, that’s my sister, I remember her), I was Dumbo, some little dude or perhaps chick was a pumpkin, and some scary looking chick who I think lived next door to me and who I punched one day when she made me trip on my roller skates was dressed as a witch. If we were to dress as these things now, our cute little group picture would look like this:

The only thing I want to dress up as is a writer.

BUT WAIT! THERE ARE NO SEXY WRITER COSTUMES!

And then I think about it. What, exactly, would a sexy writer costume be? Thinking about being a sexy writer is perhaps falling into a line of thinking saved for the mentally insane. And I’ve done that before. Not as a Halloween costume, but as an actual mental patient. I mean really, how could you dress up like a sexy mental patient for Halloween?

Why the hell does society want to sexy-fy being a mental patient? Is that really necessary? It’d be like trying to be a sexy inmate.

At least we aren’t sexy-fying everything. I mean, it’s not like I could dress up like my eating disorder.

Fine. I’m not going to dress up like any noun this year. I’m just going to be my sexy, writer self.

Chelsey Clammer is a writer who writes.