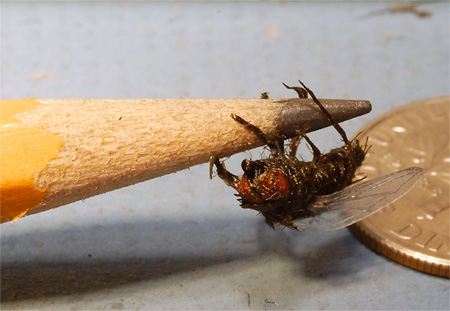 The first book I ever wrote was called The Fly that Would Not Die. I was eight years old when I composed it. The story was about, well, a fly that would not die. Fly swatter, bare hand, snapped towel, anything the narrator could use to try and hit the fly dead. But it just wouldn’t die. I wrote this story based off of a real life experience of trying to kill a fly. Like the theme of the story, the endeavor of trying to kill the fly was unsuccessful. There was even a black Crayoned picture in the book of a fly with huge wings buzzing throughout a room to accompany the text. I stapled it all together and presented it to my mother. She said it was the best story she had ever read. With this great acclaim to fuel me, I decided right then to become a writer.

There have been many failed attempts at this career. The first was a “novel” I wrote at the age of twenty about a drunk lesbian in college. I was a drunk lesbian in college when I wrote it. Next up was forty pages of an unfinished novel about an older woman who broke the heart of a younger woman. I wrote it when an older woman broke my heart. This is all to say I’m not good at writing fiction.

The woman who broke my heart had kicked me out of her life because she thought I was a lazy little woman. She thought this because I had quit my summer job in between college semesters in order to write for a few weeks before I had to start up classes again. I lost my relationship with her because I wanted to write. A horrible forty pages of material came out of that. But at least I stuck to my intentions, spent my spare time trying to pursue a writing career, no matter how atrocious the writing.

Like most writers, I have more unfinished projects than full-fleshed finished ones. And while I do have a book of essays out at a godawful amount publishers right now (publishers who are taking a godawful amount of time getting back to me), I cannot count on anything to happen with it in order to make money. And so I wait tables twelve hours a week at a tiny-ass bar/restaurant in nowhere Colorado—a town where I have retreated to in order to write more—to get money, to fuel my need for coffee and cigarettes while I write.

My mother does not like the fact that I smoke, though she still supports my writing career. She has at times given me money to live off of, a house in which to live, and a car to drive so I could concentrate on writing instead of having to have, like, an “actual” career.

A few months ago I was having a hard time concentrating on writing, because there was a fly infestation in my house. Little black buzzing annoyances that would not die. I wrote an essay about the flies, wrote about how they were encroaching on my writing space and consuming my brain, making me have nightmares about flies attacking my body, and about how the fly swatter broke after too many attempts to try and kill the little suckers that would not die. I submitted the essay to a journal. It will be published next month. The irony of this is not lost on me.

And so I find myself returning to my roots, randomly writing about flies, and still trying to claim a space in this world as a writer, as someone who takes life experiences and transforms them into words.