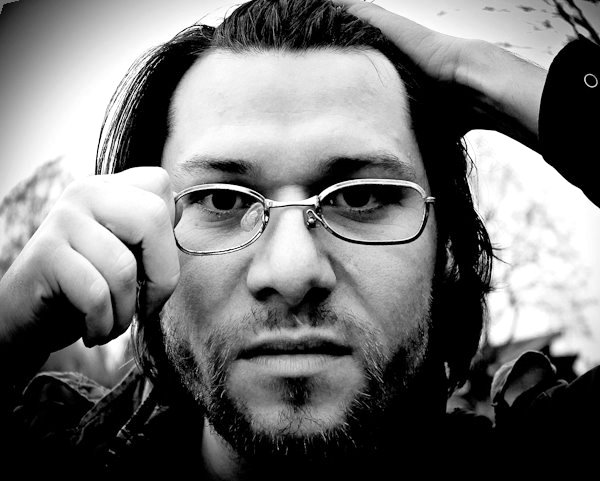 No, it was even worse: I saw a man fly. Not an insect that happened to be also a man. But a flying man. So what, people fly all the time, you say. I’ve flown over the Atlantic. I once flew to Crete to beat up a Cretan liar before flying back. Well, ladies and gentlemen, this man did not need an airplane. He arrowed through space with his arms stretched out and fluttering, a biped mammal with a name and a bad toothache.

It happened fast, and I was sitting alone in a pub. Some of my stories begin with shots ringing out. But this time shots were ringing down my gullet and pickling my brain. A disheveled guy came up in one of those gigantic layered coats like some romantic mesmerist and asked the bartender if she had any painkillers. He rubbed his chin, wide-eyed and long-faced. Then he looked at me, and burst out, “Fuck. What’s your story?”

I considered whether I should get angry, but the guy was a head taller than me. He could comfortably munch popcorn off my stovepipe hat if I’d had one.

The way he looked at me. He could’ve drilled a hole in my forehead with those eyes. He weighed me too, somehow, and I was found heavy enough.

“I’ll tell you. I can fly. A pterandroid, one might say.”

“What I just said. I can fly. I have the ability to fly. By myself.” He spread his arms.

“What were those pills she gave you, man? You should lie down.”

“I’m not pulling your leg.”

And I thought, Go back to America. Do it. These English fucktards are off. And I wanted him to go away, but he kept telling me his story. I sat there listening with a quiet disdain. One drunk looking down on another.

He said he was fifth generation of an Anglo-American program called Pteropolis established in 1902 on a tiny island off the Scottish coast. Seven—or did he say nine?—scientific couples volunteered to settle in this abbey and test evolutionary mechanisms. They were to behave like birds as far as they could. They’d frolic, use their mouths like beaks, and flutter their arms. The first generation produced children and taught them to behave in the same birdlike ways, hoping that natural selection would gradually make the necessary mutations. Nothing happened in the second generation. The third produced bulkier arms and shoulder blades. The fourth produced capacious hands and other small adaptations that led to slight levitation or lift, like a dodo or rooster. I’m not an ornithologist, and I’m not sure I remember correctly some of the details. He said something about the ribcage changing, and mental faculties and belief too. But the fifth generation could fly.

Somebody had once told me it’s the sign of a powerful psyche to fly in dreams. If that’s true, my mind is the goddamn hydrogen bomb among psyches. I toe the edge of a building and gently alight into thin air and much like some balloon in a breeze I ease my way over crowns of trees and rooftops and gaping crowds and eavesdrop on girls unaware of their devastating beauty and I traverse vast tracts of billowing landscape to arrive on shores unlike any you’ve ever seen. I can accelerate at will. I’m a blackbird. Mine is a powerful psyche.

I stared at him with what must have looked like an imbecilic smile on my lolling head, repeating, “Oh man, oh man…”

When I asked for another round, I heard a siren and he said to me, squeezing my arm, “Watch this.”

Without knowing why, I followed him into the wet street. People clung to their umbrellas and hats. A black van had pulled up a little too far down the street and I clung to myself in that deranged streetscape that looked to me tilted like one of those Chagall shtetls.

And there it was: he lifted, like some saint in ecstasy, light as a shuttlecock, buoyed by his will and implausible limbs, his coattails flapping, and I stood there on the sidewalk gaping with the umbrellad crowd as he eased over plane trees and rooftops and out of sight to eavesdrop on girls unaware of their devastating beauty and traverse billowing landscapes.

Elvis Bego was born in Bosnia, fled the war there at twelve, moved around, and currently lives in Copenhagen where he is at work on a novel. His writing can be found now or soon in AGNI, Threepenny Review, Squawk Back, Bookslut, The Brooklyner, The Coffin Factory, and Electric Literature.