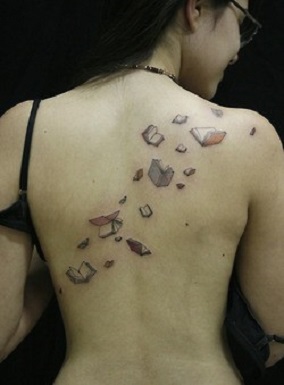 “Who taught you to write in blood on my back? Who taught you to use your hands as branding irons? You have scored your name into my shoulders, referenced me with your mark. The pads of your fingers have become printing blocks, you tap a message on to my skin, tap meaning into my body.”

– Jeanette Winterson, Written on the Body

Suppose I were to tell you I got a tattoo yesterday of a cable of blue flame twisting around my wrist, would you get it? Would you understand that I am showing the world a sense of survival through this tattoo? Would you know that I live by an Adrienne Rich quote: “We will not live to settle for less, we have dreamed of this all of our lives?” Or would these hints mean nothing, would in no way reveal to you the meaning of my new tattoo? Is the metaphor too weird?

I am a word nerd with tattoos. There are many of us. We’re die-hard fans of reading, of meaning. And soon enough we are eager participants in having our skin reveal creative concepts. We want to show you what we believe in–both the personal beliefs we hold, as well as our shared belief in the power of words. There are those of us with words and meaningful numbers written on our bodies, quotes from our favorite authors we could not live without. There’s even a 2095-word story out there, each word of it tattooed on a different person. Which means the author of this human story, Shelly Jackson, has 2095 members of the human population collectively believing in her words, her work. Yes, her story traverses the country.

We of the book-loving bevy want to take our favorite words, the most meaningful of meaningful words, sentences, paragraphs, phrases, pages and put them into our bodies forever. As where sometimes I wish I could inject Jorie Graham’s lyricism into my veins. Or take Jeanette Winterson’s idea that our loves and our histories are written on our bodies and ink it into the sheaves of my skin. I want to feel these words not just near me as they rest on my bookshelf, my desk, in stacks on the floor near my feet, but in me. I want them to be as close to me as possible, to always have them around as reminders, as a type of solace, or even as a sense of pride, confidence, bravery.

But sometimes images speak to us more than the exact words can. Sometimes the meaning behind the lines, paragraphs, stanzas, all of the pages between the covers of a book are too complex to ink just a few words into our skin. And sometimes we love the authors so much we memorialize their legacies on our bodies. “In the diary torn from my fingers I had written:
What does love mean
what does it mean “to survive”
A cable of blue fire ropes our bodies
burning together in the snow We will not live
to settle for less We have dreamed of this
all of our lives” “There is no friend as loyal as a book” “The only people for me are the mad ones, the ones who are mad to live, mad to talk, mad to be saved, desirous of everything at the same time, the ones who never yawn or say a commonplace thing, but burn, burn, burn like fabulous yellow roman candles exploding like spiders across the stars.” “I saw the best minds of my generation “Stuff your eyes with wonder, he said, live as if you’d drop dead in ten seconds. See the world. It’s more fantastic than any dream made or paid for in factories.” “All the world’s a stage, and all the men and women merely players: they have their exits and their entrances; and one man in his time plays many parts, his acts being seven ages.” “What really knocks me out is a book that, when you’re all done reading it, you wish the author that wrote it was a terrific friend of yours and you could call him up on the phone whenever you felt like it. That doesn’t happen much, though.” And what would the human population, specifically The Doctor TJ Eckleburg Review be without The Great Gatsby? can be in this world,

“And so with the sunshine and the great bursts of leaves growing on the trees, just as things grow in fast movies, I had that familiar conviction that life was beginning over again with the summer.”