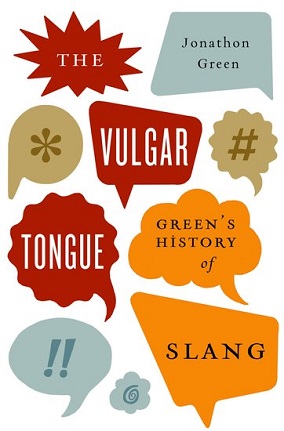 The Vulgar Tongue by Jonathon Green

Once the language of thieves and beggars, slang is an ever present part of today’s culture for people across the strata. It allows us to connect to others, to express otherwise guarded thoughts, and to convey humor in the everyday. But how did slang escape its stigma as the language of the streets and integrate itself so seamlessly with “standard English?”

The Vulgar Tongue tells the full story of English language slang, from its origins in early British beggar books to its spread in American and Australian culture in the eighteenth century. The aim is not to record the history of the over 125,000 English words that make up the lexis. Rather, the author focuses on the common, often profane themes that run through the word-list–crime, sex, bodily parts and functions, insults, and drink and drugs–and their scope and function throughout the various cultures and overlapping subcultures of English language history, from the sporting world to the university campus to ethnic communities. In tracing its development and trajectory throughout the English-speaking world, Jonathon Green offers an impassioned defense for its vitality, showing how slang has grown into a modern, versatile vocabulary that has nevertheless established its own role in contemporary English.

Drawing on thirty years’ worth of research, The Vulgar Tongue is a celebration of the words and phrases of an overlooked aspect of human language and interaction.

“A very interesting survey of the history of slang and the history of its collectors, taking in everything from the early literature of criminality to the Broadway backchat of Walter Winchell and Damon Runyon, from Soho’s Polari to the black slangs emerging from slavery in the American south.” —The Guardian

“In his relentless campaign to drag slang out of the sewer and brothel and into the drawing-room and academy, Green has no rival. He is the Dr. Johnson of slang, its Putin, it’s Mr. Toad, its Dickens.” —The Daily Telegraph