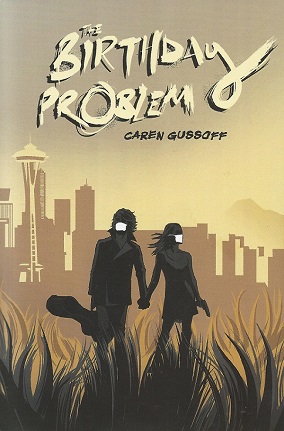 The Birthday Problem by Caren Gussoff

In the year 2060, the next plague has arrived. MaGo bots, the nanotechnology used for everything from fighting the common cold to radical life extension, have begun to malfunction, latching onto the brain’s acetylcholine receptors to cause a permanent state of delirium. The effects are devastating.
The Birthday Problem follows four Seattle survivors and how their lives irrevocably intersect: Chaaya Gopal Lee, great-granddaughter of the MaGo programmer, whom the pandemic turns into a killer; 40-something ex-rock star and pharmacy technician Greystone Toussaint, the “King of Seattle”; Alastair Gomez-Larsen, forced to become a blood-smuggler to treat his father’s liver disease; and Didi VanNess, a lovesick former-WNBA center and CNA, who tries to win back her wife’s heart against a backdrop of madness, death and 30 cats, all named Ira. Exploring themes of perception, probability, and redemption, The Birthday Problem is told from multiple points-of-view, moving back and forth in time, and the characters struggle to find their places in a – literally – mad world.

“As Sun Ra famously asked, ‘It’s after the end of the world; don’t you know that yet?’ In Caren Gussoff’s genre debut The Birthday Problem, her math geek girls, philosopher-king rock stars, and retired lesbian b-ballers deal with the combined confusions of delirium, stray cats, and sociopathic murderers so coolly you’d swear they didn’t realize that things had gone post-apocalyptic on them long ago. Drawing on hard science cred the equal of Kim Stanley Robinson’s and literary sensibilities akin to Karen Russell’s (Vampires in the Lemon Grove), Gussoff gives readers a harrowing and absurdist look at daily life in the wake of a nanotech generated plague that could be sneaking up on us right now.”
–Nisi Shawl, James Tiptree, Jr. and World Fantast award winner, author of Filter House

“Love in the time of plague. Love twisted and straightforward, lost love and found love, fan-love and family-love, love unrequited, love consummated, love dead — Caren Gussoff delivers them all, in tender and brutal close-up in her addictive drug of a story, packed into a nano-bot gone neuro-botch narrative shell. Get ready for injection!”
–J.M. Sidorova, author of The Age of Ice

“In The Birthday Problem, Ms. Gussoff evokes the forces that wreck Seattle in the most powerful way, by embedding them in the narrative itself. Carefully-established chronologies and cause-and-effect sequences inevitably break down, as if she has infected her readers with the same pathogens that are destroying her characters, a disconcerting effect, and one that makes the poignancy of their struggles even more intense.”
–Paul Park, author of A Princess of Roumania and The Starbridge Chronicles A literary and science fiction author based in Seattle, WA, The Birthday Problem is Caren Gussoff’s third book-length work; her first novel, HOMECOMING, and collection of short stories, The Wave and Other Stories were published by High Risk/Serpent’s Tail Books in 2000 and 2003, respectively, and she authored the setting chapter in the Gotham Writers’ Workshop Guide to Writing Fiction (Bloomsbury, 2003). In 2008, she was the 2008 Carl Brandon Society/Octavia E. Butler scholar at Clarion West, and her short fiction and essays have been featured in a number of magazines and anthologies — most recently, published by Seal Press and Prime Books.