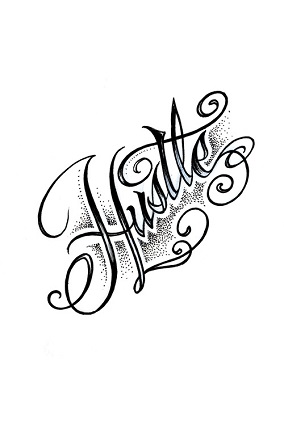 The speaker of David Tomas Martinez’s poems steals cars, runs away with canyons, sits in understudy at the bar, fathers a child before seventeen, and works welding frigates, all with no reverence for literature with clean streets. “If I ever met a kid like Holden Caulfield, I would punch him in his nose,” Martinez says, and it is with Dantean confidence that he constructs San Diego as an inferno of El Caminos and Fords, silent sex, and murdered high school valedictorians. Martinez’s youth as a Latino in the city is documented in Hustle as it moves from gang activity through his discovery of pornography to a failed suicide attempt on a crooked path toward self-understanding. He doesn’t intend to make the journey alone: “This is mine. / Where is the window to break / in your life?” This brave and honest collection works as an apt guide through the circles of a modern urban existence.

“David Martinez is like an algebra problem invented by America — he’s polynomial, and fractioned, full of identity variables and unsolved narrative coefficients. How does it all go together? And what does it add up to? The speaker in Hustle roams the kingdoms of experience, from stealing cars to explaining post-colonialism to his Mexican grandfather, from celebrating sex to wondering about the crippling mixture of strength and weakness in the men around him. Martinez’s poetic voice sings story, talks wisdom, and verbally switches between the sophistications of the academy and those of slang. Out of these trespassings and travels, he makes an original, wise, and tender poetry.  Hustle is full of dashing nerve, linguistic flair, and unfakeable heart.”
—Tony Hoagland

“Welcome to the world of David Tomas Martinez, where cars want to be stolen and the faucet is held like a gun, and homemade tattoos thicken with age. He breathes fresh air into American poetry by bringing it to the street—away from the Ivory Tower, away from the self-referential jokes and commentary. Martinez allows us to see Neruda’s love songs again, but this time they “whoop / a motherfucker’s ass.” And he makes up his own vocabulary here, one in which the word “weekend” comes from word “weaken,” long estranged from “wedded.” Open this book on the poems like “Sabbath Fe Minus” or “California Penal Code 266,” or “Coveralls,” and you will see right away a tone that is restless, metaphors that thrill you, and music that is so contagious it just won’t let you be. That is because David Tomas Martinez is a real poet.”
—Ilya Kaminsky

“In these intricate, psychologically rich poems, David Tomas Martinez looks back on a harrowing youth in a rough part of town, at one point concluding, “as a boy, I died into silent manhood.” Here, the shooting of a school acquaintance becomes an opportunity for a kaleidoscopic investigation of violence, mortality, and doomed youth. Or the ruined landscape of a concrete urban park provokes a meditation on the sadness that smolders just beneath youthful bravado. Elsewhere, the intricacies of family lore mix with the half-understood yearnings of a young man eager to make his name outside of the neighborhood. From maturity, these poems look to the past with resigned brilliance, finding in recollection not just self-knowledge, but a larger truth about the inescapable power of memory and experience to shape us. Hustle is a terrific, electric first book or poems.”
—Kevin Prufer

“Growing up in a broken home, living in a barrio, and joining a gang did not stop Martinez from transcending the low expectations of his troubled youth. The current Ph.D. candidate nurtured those raw experiences into sophisticated material that informs his startling poems.”
—BuzzFeed, “The 14 Must-Read Works of Chicano Literature”

“Questions of masculinity and power run throughout, and the poems feel simultaneously intimate and spectacular as the voice strikes registers of vulnerability and bravado. For all the narratives of strife the collection contains, Martinez’s poetics are anything but grim. Rather, there is a delight in language play and a lexicon that spans slang to theory.”
—Publishers Weekly

1. I begin Hustle with a “proem” or a prologue poem, “On Palomar Mountain.” How does this poem’s separation from the rest of the collec- tion affect how you read the following poems?

2. It has been commented that this collection is an investigation of mas- culinity. Which poems investigate gender, and how do they do so?

3. I have created various systems of imagery in Hustle, one such sys- tems involves my relationship to nature. How does Hustle deal with poetry’s history of nature poems?

4. For me, one of the important components of poetry is narrative, or more accurately a problem and a resolution, how does Hustle maximize narrative?

5. Place is an important component of concretizing “voice’ in poetry. How does Hustle utilize places such as San Diego? Houston?

6. Every poem in the collection has autobiographical elements. Does knowing that every poem in Hustle is based on a “true” event influence the reader’s interpretation of the text? How so?

7. Every part of Hustle was closely examined. How does the cover and design of Hustle, which was designed by my tattoo artist, add to the reading experience? Has the cover art on other books led your reading before? David Tomas Martinez’s work has been published or is forth coming in Poetry Magazine, Oxford American, Forklift; Ohio, Poetry International, Gulf Coast, Drunken Boat, Poetry Daily, Split This Rock, RHINO, Ampersand Review, Caldera Review, Verse Junkies, California Journal of Poetics, Toe Good, and others. DTM has been featured or written about in Poets & Writers, Publishers Weekly, NPR’s All Things Considered, NBC Latino, Buzzfeed, Houstonia Magazine, Houston Art & Culture, Houston Chronicle, San Antonio Express News, Bull City Press, and Border Voices. He is a Ph.D. candidate in the University of Houston’s Creative Writing program, with an emphasis in Poetry. Martinez is also the Reviews and Interviews Editor for Gulf Coast: A Journal of Literature and Fine Arts, and a Breadloaf and CantoMundo Fellow. His debut collection of poetry, Hustle, was released in 2014 by Sarabande Books, which won honorable mention in the Antonio Cisneros Del Moral prize.