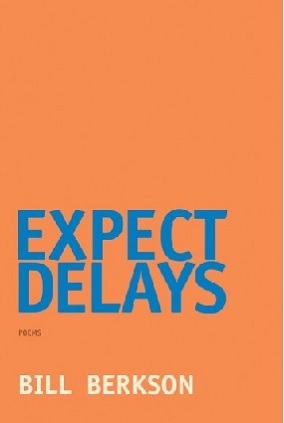 Wide-ranging and experimental, Expect Delays confronts past and present with rare equilibrium, eyeballing mortality while appreciating the richness and surprise, as well as the inevitable griefs, inherent in the time allowed.

“Insightful and inventive. . . No aspect of life is off limits from the wit and skill of Berkson’s poetry and the world is better off for it.”—AskMen.com

“Like his good friend Frank O’Hara, Bill Berkson writes about friends and family (wife, son, mother on her 100th birthday) and isn’t afraid to drop a few glam names from life in the cities where he lives, in his case San Francisco and New York. In this he resembles Stéphane Mallarmé, who wrote verses on fans (the kind you wave) and notes on fashion, as well as difficult dreamlike poetry. Berkson includes two celesta-toned Mallarmé translations, one of them ‘Brise Marine’: (‘The flesh is sad, alas! And I’ve read all the books’) alongside journalistic patter: ‘Lovers for a time, Lee Wiley and Berigan began appearing / together on Wiley’s fifteen-minute CBS radio spot, / Saturday Night Swing Club, in 1936.’ Expect Delays is an all-too-familiar warning to urban Americans. In this case, the delays are as rewarding as the invigorating voyage.”—John Ashbery Bill Berkson is a poet, critic and professor emeritus at the San Francisco Art Institute whose previous collection Portrait and Dream: New & Selected Poems won the Balcones Prize for Best Poetry Book of 2010 and  who was honored by the San Francisco Bay Guardian with the 2008 GOLDIE Award in Literature. He has collaborated with many artists and writers, including Alex Katz, Philip Guston, and Frank O’Hara and his criticism has appeared in ArtNews, Art in America, and elsewhere. Formerly a professor of liberal arts at the San Francisco Art Institute, he was born in New York in 1939, and now divides his time between San Francisco and Manhattan.