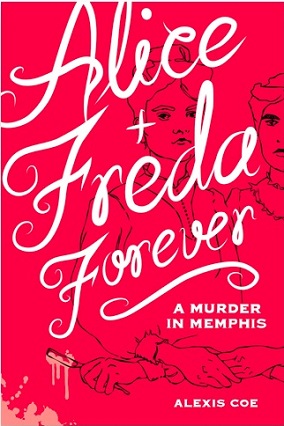 In 1892, America was obsessed with a teenage murderess, but it wasn’t her crime that shocked the nation—it was her motivation. Nineteen-year-old Alice Mitchell had planned to pass as a man in order to marry her seventeen-year-old fiancée Freda Ward, but when their love letters were discovered, they were forbidden from ever speaking again.

Freda adjusted to this fate with an ease that stunned a heartbroken Alice. Her desperation grew with each unanswered letter—and her father’s razor soon went missing. On January 25, Alice publicly slashed her ex-fiancée’s throat. Her same-sex love was deemed insane by her father that very night, and medical experts agreed: This was a dangerous and incurable perversion. As the courtroom was expanded to accommodate national interest, Alice spent months in jail—including the night that three of her fellow prisoners were lynched (an event which captured the attention of journalist and civil rights activist Ida B. Wells). After a jury of “the finest men in Memphis” declared Alice insane, she was remanded to an asylum, where she died under mysterious circumstances just a few years later.

“The murder was a national sensation at the time, but is little known today. …Alexis Coe retells it here with the color and liveliness of a novel. Her account is accompanied by illustrations of the people, scenes, and artifacts that populate this story of forbidden love.” – The New Yorker

“A historically resonant reminder of how far societal tolerance has come and that it still remains a work in progress.” – Kirkus Reviews

“[A] lively, provocative history. …A well-written effort that makes the most of its source material on two levels, both as true crime and as social commentary” – Publishers Weekly

Alexis Coe has contributed to the Atlantic, Slate, the Paris Review Daily, the Hairpin, the Los Angeles Review of Books, the Millions, Modern Farmer, and many others. She is a columnist at the Awl and the Toast, and holds an MA in American history. Before moving to San Francisco, Alexis was a research curator at the New York Public Library. www.alexiscoe.com