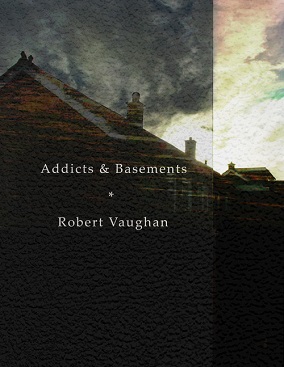 Miscommunication and misunderstanding can be an addiction, an albatross dictating the invisible creeds we often cling to. Age, time, desire, lust, and a cacophony of suppressed urges are intimated at in, “The Lost and Erasable Parts of Us: “My identity tied up in a bottle. I craved my smell back, my decency, my shameless will. I grew gills, slithered up the stairs, fettered away, toward some desert city, in undulating waves.” When identity is so intertwined with a bottle, an addiction, or a basement, it’s easy to get lost. In Vaughan’s symphony, those weaknesses are a path back to self-discovery, a melody, however distorted, to guide listeners up into revelation. This isn’t a AAA meeting though as addictions lead to other addictions and there’s no permanent egress, only leaps into oblivion. I’m a Robert Vaughan junkie now. You can find me drowning in his basement.

“Drawing its energy from society’s underbelly—the dim corner booths of bars, the stalls of public bathrooms, the thickets of unkempt parks—Vaughan’s book is part prose poem, part fractured sonnet, part Whitmanian love-cry. ‘What were your last thoughts, Ophelia? Were / you loved enough? Will I ever know when I am?’ When this poet speaks, we are compelled by the plaintive urgency of eros in his voice. On the edge of a low-lit Interstate highway somewhere between Los Angeles and New York City, Addicts & Basements yawps and pivots and veers, praising its own wreckage.”
—Dorianne Laux, author of The Book of Men

“Robert Vaughan’s poems are peopled with painfully human characters, depicted with an unnerving authenticity and irreverent compassion. In ‘Turkey Town,’ a young man working a wedding banquet sneaks out back when the father-of-the-bride dance begins because he misses his own father: ‘The cold hurt my lungs, made it hard to breathe.’ In ‘The Patio,’ patrons are ‘sucking down margaritas’ and ‘gnawing chips’ at an outdoor restaurant when there’s a car crash and they become witnesses to the scene. In ‘Bonus Question,’ a woman calls into a late-night radio quiz, but instead of giving an answer, she asks, ‘Will you love me?’ The deejay is unmoved, but the poet says: ‘Somewhere, lying in the darkness … someone who has never seen her face whispers yes.’ These are poems to break your heart, but Robert Vaughan is always whispering ‘yes.’”
—Ellen Bass, author of The Human Line

“Robert Vaughan is a voice I am glad to know, and his excellent debut, Addicts & Basements, is a collection full of confidence and startling complexity. Pick it up; you won’t be able to put it down.”
—Gregory Sherl, author of The Oregon Trail is the Oregon Trail

1) Whose writing does Vaughan’s remind you of?
2) Many of Vaughan’s pieces contain dark references or situations (pathos). Why do you think this happens in his work?
3) Do you feel that his cover(s) relate to the material in his collection?
4) Any favorite characters? Any you might want to see return in a longer piece of his?
5) Can you speak to the three sections included in the book: Addicts, &, Basements?
6) Vaughan crosses the lines between prose and poetry. Can you speak to his tendency to include both in Addicts & Basements?
7) There is a quirkiness or an abstract element in many of Vaughan’s pieces. Choose one poem and elaborate on this part of Vaughan’s writing. Robert Vaughan leads writing roundtables at Redoak Writing. His writing has appeared in hundreds of print and online journals. He is a Pushcart Prize nominee. His story, “Ten Notes to the Guy Studying Jujitsu” was a finalist for the Gertrude Stein Award 2013. His story “The Rooms We Rented” was a finalist for the Gertrude Stein Award 2014. He is senior flash fiction editor at JMWW and Lost in Thought magazines. His chapbooks are Microtones (Cervena Barva) and Diptychs Triptychs (Deadly Chaps). His first full- length book is Addicts and Basements (Civil Coping Mechanisms).