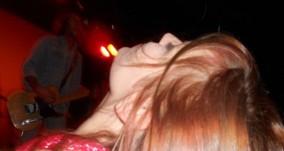 She is the most beautiful dead woman I have ever seen. Her lashes, long and thick, kiss her magnificent cheekbones. Brown hair billows around her shapely face. She is stylish, lean legs thrust into fur boots, head crowned with a jauntily tilted hat. When I first see her picture, I am slouched in my doctor’s office, thumbing through an ancient issue of Archeology Magazine. Instantly, this mummy mystifies me, so much so that I momentarily forget why I’m here. I forget my heart has been beating erratically against my ribcage like a scared bird. I forget my shortness of breath. I forget I am now four years younger than my father was when he died of a heart attack. I’m 42. Maybe it doesn’t sound old, but to me, it’s a death knell. In four years, I could be dead.

They call her the beauty of  Xiaohe. She’s stunning, never mind that she’s been dead for four millenia. She was found in some obscure corner of China. Governments fight over her. They all want to own her. And why shouldn’t they? Powerful men have a long history of fighting over beautiful women. She looks like she just stepped off the set of a black and white film for a quick nap. You don’t believe me. Mummies are never pretty, you say. But you should see the picture.

1.
I am ten years old, still plump, soft, and luminescent. At a grocery store, the movie star stares out from the cover of a magazine, gangly, gorgeous. I want to be like her. Later, I see her on T.V. “What’s your secret?” the interviewer asks. She crosses and uncrosses her lean legs. “Running. Running makes you beautiful.”

2.
I used to run. Fast. Lean legs pounding sunbaked New Mexico soil. I told myself I was training for a marathon, but I think I was trying to get away. I thought if I ran fast enough, it would never catch up to me. Gray hair. Death. An eternity spent as bones in a box. I used to write it on a piece of paper. Run. Run. Run.

3.
When I was in my twenties, the idea of my demise taunted me. Such humiliation. Now, I see my early fear of death reflected in the eyes of my daughter. They say she looks like me, just as I look like my mother. We all have high cheekbones, accidental magnificence left like litter on our faces. And maybe this is what matters. Those recurring cheekbones. The part of us that lives on and on and on, sequestered somewhere in our platelets, replicating itself in our progeny long after we are gone.

Now, The Beauty of Xiaohe is a superstar. She made the cover of Archeology  Magazine. But to her tribe, she was just another girl. Archeologists don’t think she was particularly important. Then again, who is? I wonder if she ran. Her legs, preserved in her fur boots, look like she might have. I close my eyes and see her, feet pounding, head thrown back, hair billowing in the wind.

1.
My chances at mummification are small. Four-thousand years from now, I will be nothing. Less than a breeze. Less than a whisper. Less than a thought. I will die, and my magnificent cheekbones will go up in flames. What a waste.

2.
When I was young, I had this gift. I was just elusive enough to be endlessly fascinating. I was like the gambler in that old country song. I knew when to run. Boys love things that run. Don’t let anyone tell you different. Running makes you beautiful.

An archeologist named Mair saw her in a glass case and fell in love with her instantly. He’s been studying her ever since. She’s elusive, that one. Her secrets are buried in her bones. At night, he pours his attentions over her body, searching for clues. He calls her the Marlene Dietrich of the desert.

1.
I dreamed my ex-lover last night. Young, frail, and beautiful. His eyes were like something you’d see in a National Geographic Magazine, set in the face of a creature not human. A deer. An otter. Something brown and innocent. It had been years since I’d seen him, but the dream made me remember. Often, he cried when he said my name. It was like that with us. We cried together, united as we were, a flesh front against a world that had proven itself too large, too inexplicable, too painted blue, too relentlessly gashed and pitted for  our understanding. He wanted to get a hawk tattooed on his shoulder, a hawk to remember my dead father, who was a falconer. They all wanted hawks to remember my dead father, whom they had never met. This was how these boys loved  me.

2.
I remember the day he drove to a river, and he took my shirt off, replacing it with his jacket, zipper down. I remember the way my belly glowed white in the moonlight. It is always like this. I remember me more than the boys that loved me. What does this say about me?  I never wanted tattoos for their fathers.

1.
They wanted hawk tattoos. These days, I think this means something. I cherish it now the way I would not then. There will always be another boy, I’d tell myself. And there was. When I left the one with National Geographic eyes, he cried. I did not. I hated him by then. I always hated them in the end, hated them for forcing me to admit that I’d never really loved them in the first place. He said I would never find anyone who loved me like he did. He was wrong. They all loved me like he did.

2.
The boy with National Geographic eyes loved me forever. I know because I saw him years later, and he said it was like that. I danced with him under the stars then, for old time’s sake. He tried to call the next day. I didn’t answer.

3.
When I dreamed him, I saw him as a deer, bounding through the forest. He smiled at me. It was all wrong. As if deer know how to smile. As if that one knew how to run. He never did. That was his downfall.

4.
But me. I keep running. If I sit still too long, I feel it coming for me. My death. I don’t want to feel it coming. I want it to stalk me quietly, swallow me whole before I know what hit me, spit my bones into the cremation oven, say, “That girl was sinewy, chewy. She must have known how to run.”

5.
I say I don’t remember the boy with National Geographic Eyes, but I do remember some things. I remember touching his scars, my hands tingling, wishing that I was Jesus, that I could erase his pain, heal him. It wasn’t love exactly, but it was something. Pity? I wanted to love him, but I couldn’t. I remember tracing the tiger tattoo on his back with my fingertip. He never got a tattoo for my father.

The Beauty of Xiaohe had no tattoos, but she wore a skirt resembling that worn by several Venus figurines dating back 24,000 years. This fact fascinates scientists. Time is long, and I am short. I will die. In a hundred years, no one will care what kind of skirt I wore.

1.
I wear a tattoo over my heart chakra. Not for the ones who wanted tattoos for my father. For Him. My rock star. The one I first saw standing, singing, under a halo wearing moon, and loved instantly. The one who never tried to chain me. The only one I ever wished would chain me. I wanted to stop loving Him, but I couldn’t. At first, I thought I might love Him because he was a rock star, so I tried loving other rock stars. I couldn’t love other rock stars. I thought I might love Him because he was a philosopher, so I tried loving other philosophers. I couldn’t love other philosophers. I finally had to admit that I loved Him because he was Him. I became a groupie and ran after Him. I followed him all over the world. That boy knew how to run. Girls love things that know how to run. Don’t let anyone tell you different.

2.
Once, my rock star pulled me to him beside his bus and whispered something: “Sweetheart, you don’t know this, but you are the thing that keeps me going.” He did not take off my shirt. He did not give me his jacket. Still, his words were the best sex I ever had. I don’t remember what I looked like in the moonlight. I only remember Him, shining like the sun. He had wrinkles around his eyes by then. We were old. Older. Old enough to understand that we were starting to die. Old enough to still be beautiful, but not for long. But in that moment, I knew my years on this blue planet had mattered. By running after Him, I had made the thing I loved most in the world strong.

5.
I find a gray hair, and it doesn’t scare me anymore. I see wine, and I drink it, no matter about the whiteness of my teeth. What does this say about me, the way that I am opening my arms, embracing my death as I could never embrace my youth?  My lean legs were too much for me. Gaping men frightened me. They still stare. But it’s not too much for me anymore. Sometimes, I miss being vulnerable. I want it to be too much.

They buried her in a coffin resembling a capsized boat. Dressed her up pretty and left her adrift  in the desert like that, long lashes kissing magnificent cheekbones forever. A warm breeze blew by, fell instantly in love, drank her blood down, dried her down to leather. I imagine time swallowing her whole, waves of sand drifting over her carcass, loving her, protecting her. You are mine, the wind whispered. And so she was.

1.
I Google “cremation” today and find the search results comforting. I like the idea of the world still being there as the cremationist is picking shards of my bones out of a box with tweezers. My pain will be done. However I die, whether by blowtorch or jackhammer or machete, (I have a wicked imagination), it will be over, and I will be melted down to something beautiful, to place in a vase on a mahogany mantle, or to feed to the rumbling belly of the hungry sea. Soothing yes, this thought of my remains, this idea that I’m not important, that I was never anything more than a jar of ash and teeth.

2.
When they burn me, I hope some ink from the tattoo I wear for Him seeps into my bones, dyes the sea a deeper blue for a moment or two.

Tawni Waters is an award winning writer and poet.  Her first novel, Beauty of the Broken, was published by Simon Pulse in 2014 and was listed as an Exceptional Book of 2015 by the Children’s Book Council.  Her first book of poetry, Siren Song, was published by Burlesque Press in the same year.  Her work has been seen in myriad magazines, journals, and anthologies, including Bridal Guide Magazine and The Best Travel Writing of 2010. She teaches creative writing in Phoenix, Arizona.  In her spare time, she talks to angels, humanely evicts spiders from her floorboards, and plays Magdalene to a minor rock god.

Tawni Waters is an award winning writer and poet, and her work has been featured in The Best Travel Writing of 2010. She teaches creative writing in Phoenix, Arizona. Beauty of the Broken (Simon & Schuster) is her first novel.