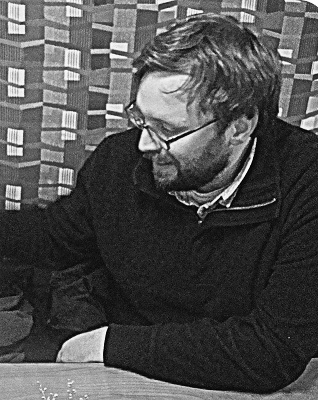 At eight weeks, she eats / less and less. Food doesn’t sound good to her, / it’s all Too complicated, she says, when he offers / to make her breakfast, lunch, dinner. She stops him / from saying the dishes out loud—veggie patty, plain noodles, a bowl / of oatmeal with sliced strawberries—all too much / to taste on her mind’s tongue. For three days in a row then, / she asks him for waffle fries, extra salty. / He heads out immediately, both of them scared / that within the next instant, her stomach will churn / for something else or nothing, even / though she needs to stoke this fire burning / inside her.

He thinks back to the first time again, / if it played out at all like TV or the movies / with their pregnant women demanding fried pickles and chocolate / ice cream, fast food burgers and Frito pies; he tries to recall / if there was one food she craved, over and over. She did / not, as far as he can tell, this now something new / they’ve never experienced, this newness perhaps another indication / of the good to come, one more marker by which he can navigate / this complicated path.

She does what she can to stay ahead / of the curve: she works twice a day to down the horse pills, / milk thistle to cleanse her liver and B6 for nausea, / which anecdotal research tells her might stave off / what might come.

It’s the mights which bother him, / her disregard for the word’s focus on possibility, / not probability that can be relied on. The man cannot trust / guesses. He does not believe in mommy / blogs and HG recovery others, all natural and holistic caregivers / who have no idea how bad she had it, / no clue of the nothing effect anything prescribed had. / He keeps this to himself when she asks / if it’s been a fool’s errand to try; / he mutters about cost and false hope when she’s out / of ear-shot, and when he’s alone, when she forwards him / another article that this combination can promise her / the world.

But because he lives in it, this world which breaks / its word when it wants, no questions, he hopes / only for the placebo effect, as good as any treatment they’ve found, / though he’s happy to be wrong even / if he doesn’t expect to be either.

Michael Levan has work published in recent or forthcoming issues of Iron Horse Literary Review, Hobart, Hunger Mountain, Indiana Review, Radar Poetry, Mid-American Review, and American Literary Review. He is an Assistant Professor of English at the University of Saint Francis and writes reviews for American Microreviews and Interviews. He lives in Fort Wayne, Indiana, with his wife, Molly, and children, Atticus and Dahlia.