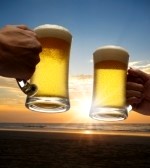 I got me some angry scars on my arms. Thick lines that show the world how I used to take a razor to my arm. Not the most uplifting subject matter, but it’s the way in which I learned how to get over it that got me here, continuing on with this living. There are the friends that pulled me through, the beach parties at night that made me smile more. And there is one particular friend that helped me get over the nasty habit.

Ashley’s scars are less obvious than mine, because she has tattoos covering most of her arms. And she has a lot of scars, too, which mean she has a lot of ink. Tough doesn’t even begin to describe Ashley’s appearance. She is from Boston and has a dead-giveaway of an accent, not to mention the Boston Red Sox baseball cap that is permanently plopped down at a slanted angle on her shaved head. She used to ride a skateboard, but in my mind I always imagined that that meant she used to chase after people who pissed her off, threatening to whack them over the head with her board, more than it meant cruising around. The girl had an angry set of butch balls on her.

The scars we have in common is what makes our friend Pidge introduce us. Pidge (short for Pigeon with an intentionally inserted “d”, or else she would have been Pige, which most likely would have been pronounced “Piej”. And that just sounds Bourgy). Pidge wanted me to meet Ashley not only because she was Pidge’s first love turned ex-girlfriend turned best friend, but because Ashley was a cutter and I needed help with that–not with the cutting (believe me, I got that shit down), but with the not cutting.

We’re made to be friends, two people who can relate and have a couple of drinks together. A few days after we first meet, Ashley calls me up to invite me to hang out and drink beer on the beach with her, her girlfriend, some dyke Australian, and two other queers from Virginia. (In Ashley’s thick Boston accent they are “Kweeaz”).

“Yo Cutta. We got some kweeaz wid us. Ya game? Beeaz on da beach wid some kweeaz.”

Translation: Hey person who also cuts. We have some other gay ladies with us. You want to come and join us for some beers while sitting on the beach with some other gay folk?

Come on. How can you say no to that?

Instant friends are made over the beers. And at the beach in Chicago, I find a piece of myself that night that doesn’t want to go away. The friends, the guitars that the ladies bring with them, the night stars that orchestrate renditions of Ani DiFranco songs. All of this gives me a reason to not cut, to try and stay on this earth. So does Ashley.

“Come on Cutta, you gotta cut that shit out. Ya hear me?” Ashley says to me on the beach.

“Yeah, I gotchya. No more cutting.”

“That’s right my little kweea. We got this shit.”

And she hands me a beer. I would like to say I never cut again, but that doesn’t happen for awhile. But not that night, I do not cut when I return home from the beach, but continue to laugh at how great it feels to be feeling alive again. And the queers on the beach help me to love the fact that I am in this world and living.

Awhile latter Pidge asks me to take Ashley to the emergency room. I have my boss’s car, and Ashley got a cut on her foot from stepping on glass at the beach after I left. It is the next day, and the cut is getting huge and red and infected. I pick up Ashley at her house and drive her to the hospital. She’s hung over and wants me to stay with her in the emergency room.

A nurse enters quickly and says that she has to take some blood from Ashley’s arm.

“You want ta stay in heer for dis Cutta? I mean, ya not squeemish over da blood, right?”

I look at her.

She looks at me.

“Ah right. Cutta. Well, don’t be getting all giddy and shit over dis blood.”

I shake my head at her, and watch in fascination as the blood is sucked out of her arm. What a weird endeavor, a way to make friends over our mutual fascination of blood seeping out of the body. Blood sisters, I call us.

Eckleburg
Chelsey Clammer is the author of the award-winning essay collection, Circadian (Red Hen Press, 2017) and BodyHome (Hopewell Publications, 2015). Her work has appeared in Salon, The Rumpus, Hobart, Brevity, McSweeney’s Internet Tendency, The Normal School and Black Warrior Review. She teaches online writing classes with WOW! Women On Writing and is a freelance editor. Her next collection of essays, Human Heartbeat Detected, is forthcoming (Fall 2022) from Red Hen Press. www.chelseyclammer.com
Pages: 1 2

One Reply to “Beeaz on Da Beach”