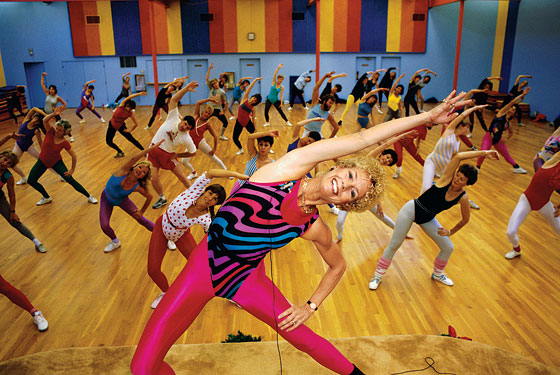 When I was eight, I saw my mother win a hula-hoop competition. We were at a work picnic for my dad’s company, and she entered the contest and won it. Her prize was a bright yellow walkman. Yes, that portable thing from the 90’s that played tapes.

I wasn’t too surprised when I saw her win, when I saw that she could keep the pink hula-hoop circling her hips for a longer amount of time than any of the other contestants. It wasn’t surprising because I knew how strong my mother’s abdomen was, knew of her never-ending amount endurance.

These physical traits of my mother existed because she taught Jazzercise—“Jazzy” as I called it in my diary when I was nine and jotted down that I was finally a popular girl in my forth grade class, because my mom came to my school and taught all of us Jazzy and everyone thought it was cool, so I was automatically cool because I was the instructor’s daughter. Being a Jazzercise instructor for fifteen years did not just mean that my mother had the perfect physicality to win a hula-hooping contest, but this also meant that she had a large collection of brightly colored spandex shorts and thong leotards. And it meant that she had boxes full of singles—tapes with only one song on them. And this fact meant that she had to switch tapes during the hour long class after each three minute song. She put the tapes in order inside of a small wooden crate, then set the crate down on top of the boombox in whatever rec center or church basement she was teaching in that day. And finally, the fact that my mother taught Jazzercise for fifteen years also meant that she owned a microphone headset like Madonna—not Madonna our dog who my mother insisted on naming Madonna because she thought the dog had sass like the pop singer Madonna, but her microphone headset looked like the one the pop singer Madonna wore.

Sometimes I tagged along with my mom to her classes and babysat the mothers’ kids. The following statement is not a generalization, but a fact: all of the attendees of my mother’s Jazzercise classes were young mothers trying to sweat of the weight they gained from giving birth. So I babysat all of the student’s kids as their mothers tried to do away with what having these kids had done to their bodies. There was one exception to this generalization, which was Glen who was in his forties, who had long gray hair he kept out of his face with an orange sweatband that matched the color of his orange slouch socks. He, too, wore spandex tights—royal blue ones that always turned a wet, darker shade of blue near his crotch when he started sweating—but unlike the determined mothers, he wore a baggy white t-shirt instead of a thong leotard. Thank god. Glen had two small kids and was also a long-distance runner. When I ran my first marathon at age seventeen, I passed Glen who was also running the marathon, only he was also trotting along while pushing a stroller that contained his two young children. I noticed how he bounced as he ran, and a year later when I finally convinced my mother to go running with me, I noticed she also had this hop quality in her stride. Too much of her body movement had been saturated with bouncy Jazzercise moves, which made her incapable of running without a bounce.

Sometimes when I tagged along with my mom to her classes, I would actually participate in the class. But I could never get the hang of all of those moves—plie, grapevine, chasse, kick ball change, Jazz square—and so by the middle of the class I digressed to hopping up and down and kicking out my feet and waving my arms and flinging my body around as I tried to keep somewhat in sync with my mother’s expert rhythmic movements on the stage.

My mom taught Jazzercise four times a week—three weeknight classes and one “power class” on Saturday mornings. Those classes were “powerful” because they lasted for ninety minutes instead of the normal hour, and because the plastic purple aerobic steps were put to use during them.

I remember how at the end of every class my mom would stretch one hand up over her head, and then exhale a full, relaxing breath that wooshed through the room due to the amplification made by the Madonna microphone. She practiced this finale move in the extra room in our house that was designated as her Jazzercise office. This room had two huge mirrors on the wall, a dark cherry desk on which her double-deck boombox sat, a day bed that was only used for if we had company and we never had company, a green and purple plastic aerobic step, a small TV with a VHS player that sat on top of the dresser that contained my mother’s spandex shorts and thong leotards, and also in this room was a closet full of Jazzercise instructional VHS tapes and single cassettes. Each morning she went into her office and started to learn the routines—which changed every month.

The boxes which contained the new set of routines for the month were delivered by a UPS truck a week before the beginning of the following month. Inside were all of the singles of music used for the new set, the instructional VHS tape, and a printed out set of movement instructions for each song. Being an instructor meant that my mom owned a franchise, which meant that she had to pay the Jazzercise creator/guru Judi Sheppard Missett a small fee each month in order to receive the tapes and instructions and to be able to continue teaching.

It was always exciting the day that Jazzercise box came. Which new music would be inside? Would there be anything I would actually want to listen to? Most of the time it was not, yet I was still excited by the possibility of cool music. Back then—and I imagine still now—Jazzercise created routines to the most annoying of songs. “Itsy Bitsy Teeny Weeny Yellow Polka Dot Bikini.” And when the “Flinstones” movie came out staring John Goodman as Fred, Judi Sheppard Missett made up a routine to the movie’s theme song sung by the B-52’s. I hated the B-52’s. A single note from “Love Shack” would put the entire song playing on an endless loop inside of my head for two weeks. The Jazzercise songs were never good, were never songs I would want to listen to, but they were necessarily peppy so you could Jazzercise to them.

My mother had a set of highlighters she used in order to mark important instructions printed on the instructor’s guide, to make them stand out. Orange for a change in pace. Blue for beat counts. Yellow for the names of the moves. And green for the verbal instructions she was to say to her class. Each month my mother meticulously marked up the instructions with her highlighters then began learning the routines, starting out with sitting on the ground with her back against the day bed watching the hour-long video so she could get a feel for what this new rotation of songs was like.

And then it was time to practice. First she would go along with the tape while reading the instructions. The she would turn of the VHS and play each song on her boombox while she practiced the routine to it, trying to not look at her notes. Eventually she practiced them with no notes, and once that was accomplished, she would then start going through the whole set multiple times a day in order to memorize it.

While she was learning the newest set, my mom was still teaching her four classes a week. All of this is to say that for fifteen years my mother was doing Jazzercise for at least forty hours a week. Her job was to help slim down her students’ bodies, and the first step toward that goal was to set an example, to bravely dance around a stage wearing a neon yellow thong leotard and fuchsia spandex shorts. She did this to show her students that if they worked at it hard enough, they, too, could have a body that did not look hideous in a thong leotard. But more importantly she wanted to give them confidence in themselves.

My mother eventually quite Jazzy. I was in college by then and hadn’t been able to attend one of her classes in years. I think she just get bored with it, sick of it, tired of it, and so she didn’t care that much anymore about being excellent on the stage. Years after she quits she’s out shopping one day and finds a silver necklace with a charm of a woman dangling from it. The woman has one arm raised, grasping up to a yellow gem shaped like a star. The charm looked like how she used to look at the end of every class. Arm stretched up. Exhaling a big, calming breath, and feeling the pride of teaching another perfect class vibrate through her body.

She bought the charm to remember those times. To never forget about the thongs and the spandex and Glen with his gray hair and the Madonna microphone and her boxes of tapes and especially to not forget about the way her audience looked at her amazed.