Before I started writing full-time, I had a corporate sales job. I sat in a cubicle for eight hours a day, managing the delivery of products that I would never use to places that I would never visit. The job was routinized. There were specific tasks that needed to be done in a certain way, and at a certain time every day. There was comfort in always knowing what was expected. But with that comfort came boredom, and with that boredom came frustration, and before long, those cubicle walls started to close in.

Left unchecked, that frustration can become poisonous to company morale; so most businesses try to find ways to break the monotony. At this company, that came in the form of an annual talent show. Every year, for one day, the corporate drones transformed into dancers, singers, magicians, and comedians. It was a chance to learn a lot about people I saw every day, but never spoke to. The quiet nerd from IT who wouldn’t make eye contact with girls in the hall wrote moody guitar rock. The mousy lady from Human Resources, who never said more than two words to anybody at lunch, had an operatic singing voice. The guy from the warehouse could barely speak English, but he could do a mean Elvis impersonation.

The talent show was held every year at Halloween. The entire company would shut down for that day, and each department would decorate its offices according to a theme they had chosen. The owner would tour each department and choose the best decorated.

This entire spectacle was the owner’s idea. Each year, he sat in the front row of the talent show like a king. After the show, he walked through the hallways snapping pictures of everyone in costume. He paid special attention to the youngest female employees wearing the least clothing. Even though this tradition had been born from his love of Halloween, he never dressed up himself, he never took part in the talent show, and he never acted in any of the skits. His roving eyes and non-participation gave the entire experience a creepy vibe, as if we were all just there for his amusement.

Each year, there was a daily prize giveaway during the week leading up to Christmas vacation. A tiny figure of Waldo from the Where’s Waldo books was hidden somewhere in the office, and clues to his location were emailed to everybody. Most people read the clues, smiled, gave a few shots at figuring it out, and then went about their day, but some people became obsessed with finding Waldo. They were looking for any excuse to not be at their desk. Finding Waldo, whenever they managed it, was a concrete achievement in a job that felt devoid of meaning.

In such an environment, it’s rare to see any true emotion. When it is expressed, it comes out in an outburst — a supervisor yells at an employee, or an employee who’s finally had too much lets his boss have it. These bursts of humanity are so rare that they stay burned in the memory forever.

Find Finnian is about one of those outbursts — the departing wail of a woman, Mary Ellen, who’s given her entire life over to the corporate world. Instead of following her descent through her own perspective, we hear the story from a disinterested narrator — a cynical, misogynist jerk, who’s only passing along the story for the rush of excitement that sharing such gossip will provide. We don’t know what exactly has happened to trigger Mary Ellen’s outburst, because the narrator doesn’t know.

It’s a frustrating thing when a writer says that they don’t know the answer to some secret that’s implied in their story, but I can’t tell you what’s happened to Mary Ellen, either. At the end of the story, the narrator shares several different possibilities that he’s heard in rumor — that she may have lost a husband or a son. It’s also implied that she may have died in the meantime — suggesting that a terminal diagnosis may have led to her breakdown. Those all represent possibilities I played with while conceiving the story. I couldn’t decide which was worse: to have to deal with the banal stresses of office life while also dealing with a personal crisis; or just one day realizing that working life meant nothing. So, I let the reader decide.

I’m fascinated with office “legends” that spread from person to person. It happens in every workplace, in every part of the world, with even the most mundane of stories. We’ll never know if Mary Ellen’s breakdown was as dramatic as the narrator describes it, because we weren’t there. And it’s likely that he is embellishing, because why wouldn’t he? He’s less concerned with the truth than with keeping his unseen reader on the hook.

But even as callous and guarded as the narrator appears, and as cynically as he tells this story, something about Mary Ellen’s experience stuck with him. Even in a boring job, odd things happen every day. But this moment embedded itself in his memory. Maybe he has to tell the story, to expel whatever it is about seeing that woman’s breakdown that haunts him. It may be guilt. Early in the story we see him treating Mary Ellen with causal disrespect — maybe carrying on her memory is his way of making up for his behavior. Or maybe it’s that in that final moment, when he sees Mary Ellen — a strong, authoritative figure, reduced to a creature of pure, shrieking anger — he saw his own anger laid bare. The ritual of the storytelling, then, becomes a distancing device, a way to protect himself from his own buried emotions.

In that sense, the narrator has been just as depersonalized as Mary Ellen was. She stifled her emotions for decades in the name of the company, but he’s displaced just as much of his humanity, as shown by his lack of empathy towards her. In the end, the greatest evil is that which causes us to lose our ability to see the other as a part of the same whole as us.

Matthew Guerruckey is the founding editor of the online literary magazine Drunk Monkeys, and a fiction writer. His short fiction has previously appeared in The Story Shack, Connotation Press, Bartleby Snopes, Cease Cows, and The Weekenders Magazine. Matthew lives in North Hollywood with his wife, poet SC Stuckey, and their cats Lennon and Harrison. He is working on his first novel. 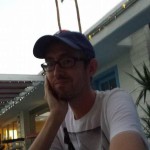