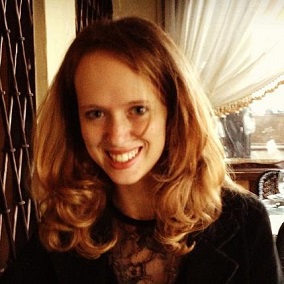 Assistant Fiction editor Tara Isabella Burton talks about what she’s looking for in a submission, the aesthetic of The Doctor TJ Eckleburg Review, and her fascination with the intersection of the mythic and the human in literature. Tara Isabella Burton: I first found Eckleburg – and fell in love with its aesthetic (where else can you find a masthead that prominently features its inspirations as posthumous editors?)after discovering it on Duotrope. In early January, when I was considering submitting a piece, I noticed that Eckleburg was open to fiction readers. I applied instantly.

TIB: I edit fiction, which means combing through Submittable, in search of that perfect story that will stick with me for the rest of my day.

That story – that makes bold decisions and sticks with them all the way through, that tells itself with conviction. Most of the stories I vote “no” on aren’t bad – they’re half-hearted – unpolished, sometimes, or just safe. I’m not looking for Finnegan’s Wake, but I am looking for stories that show a writer who’s making active choices with her material. A big pet peeve of mine is a dull or cliché voice – particularly the “down on his luck, drunk, arty-type who can’t stop looking at women’s breasts.” A good 20% of submissions I read seem to fall into that category.

TIB: I’m particularly excited about Lynda Sexon’s “Sugaring a Mirage”, because it was one of the first pieces I voted “yes” on from the submissions pile – I tend to go through submissions in batches, so I read quite a few at one time. And with this one story, it was so obvious from the first paragraph that it absolutely stood out.

TIB: My fiction and essays have appeared or is forthcoming at Arc, The Rumpus, Guernica, Litro, and more (as well as here at Eckleburg). I’ve also written for a number of UK magazines, including The Spectator, The New Statesman, and Conde Nast Traveller. My main love is novels, though – my agent’s just sent my first novel out “on sub”, so it’s all rather exciting at the moment.

TIB: I’m interested in the intersection of the mythic and the human – combining fantastical (if not necessarily supernatural) stories, images, language, with a strong commitment to the “smaller” moments – truthful characters, truthful dialogue. Thomas Hardy and DH Lawrence are two writers I think do this incredibly well – another is the twentieth-century Hungarian novelist Magda Szabo, who’s unfortunately far less commonly read. All too often, I read compelling, even surreal, stories that sacrifice characterization, or hyper-realistic novels too afraid to take risks with storyteller. I’m interested in fusing those two approaches.

TIB: I’m doing a doctorate in the intersection of theology and literature, focusing on nineteenth-century French decadent writers.

Tara Isabella Burton’s essays and travel writing can be found at The New Statesman, Guernica, The Rumpus, Conde Nast Traveller, and many other places. Her fiction has appeared or is forthcoming in Arc, Litro, The Dr TJ Eckleburg Review, and more. She is the winner of The Spectator’s 2012 Shiva Naipaul Memorial Prize for travel writing and the author of the novel A Thief in the Night, currently on submission. She is currently a Clarendon Scholar at Trinity College, Oxford, working on a doctorate in theology and fin de siecle French literature. Tara is represented by the Philip G. Spitzer Literary Agency.