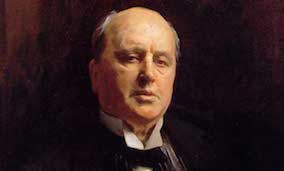 Henry James’ writing recently was used to promote Rolls Royce automobiles; the use of “Live all you can, it’s a mistake not to” (originally spoken by The Ambassadors’ Lambert Strether) was highly ironic, considering the novel’s treatment of mass marketing.

In 1915 he became a British citizen as a protest of the US’s refusal to enter the Great War.

James’ novels contain understanding and thoughtfully drawn portraits of women; James himself was a closeted homosexual, but remained sensitive to basic sexual differences and the fact that he was a male.

Henry James was an American-born English essayist, critic, and a prominent 19th-century author of literary realism with well-established credentials in literature, psychology, and philosophy. He wrote 20 novels, 112 stories, 12 plays and a number of works in literary criticism.

James was born in New York City into a wealthy family that included well-known intellectuals such as his father, Henry James Sr., and siblings William James, philosopher and psychologist, and Alice James, a diarist. Henry Sr. saw to it that his family spent many years in Europe where his children were tutored in languages and literature, including the classics of English, American, French, Russian, and German literature. At nineteen James attended Harvard Law School briefly, but was more interested in literature. He published his first short story, “A Tragedy of Errors” two years later, and 1871-72 he contributed to the Nation and Atlantic Monthly.

His first novel, Watch and Ward (1871), appeared serially in the Atlantic and was written while he was visiting Venice and Paris. In Watch and Ward he told a story of a bachelor who adopted a twelve-year-old girl and planned to marry her.

James left America to live most of his adult life in Europe, living for a time in Paris before moving to England. In 1897 James withdrew from the frenzy of London to the calmer Rye in East Sussex, where he bought “Lamb House” and continued to write.

He declared that his writing models were Dickens, Balzac, Ibsen, and Hawthorne. Many consider his peak in producing fiction to be when he wrote The Portrait of a Lady (1881), The Turn of the Screw (1898), and The Ambassadors (1903), and these have received the most intense critical study. He considered The Ambassadors to be his most perfect work and The Portrait of a Lady remains his most popular example of his long fiction.

In 1904 James travelled to America and conducted a lecture tour that inspired a series of essays published in North American Review, Harper’s, The Fortnightly Review then republished in 1907 as The American Scene.

James wrote many narrative romances with highly developed characters in settings that allowed much social commentary on politics, class, and status, as well as explorations of the themes of personal freedom, feminism, and morality. His short stories and novels are known by his use of interior monologue and point of view. His themes often compared the Old World with the New, usually emphasizing American naiveté and European wisdom and decadence. James became widely respected in North America and Europe, earning honorary degrees from Harvard and Oxford Universities, in 1911 and 1912 respectively.

James never married and appeared to live a life of celibacy. He became a British citizen in 1915 after the outbreak of World War I. In 1916 he was awarded the Order of Merit by King George V.

After several years of decline and a stroke, Henry James died of pneumonia on 28 February 1916. His ashes are interred at the Cambridge Cemetery in Massachusetts beneath a stone inscribed “Novelist, Citizen of Two Countries, Interpreter of His Generation On Both Sides Of The Sea”. A memorial stone rests in the Poets’ Corner of Westminster Abbey, London.

He is best known for his novels describing Americans encountering Europe and Europeans. His method of writing from the point of view of a character within a tale allowed him to explore issues related to consciousness and perception, and his style in later works has been compared to impressionist painting—entirely in keeping with the fin d’ siècle movement emanating from Vienna exploring the inner worlds and the interplay of subconscious and conscious.

As a psychological novel, The Portrait of a Lady explores the minds of his characters, and to some is almost a work of social science, exploring the differences between Europeans and Americans.

In The Wings of the Dove (1902) the character of Kate Croy is ambiguous—neither good or bad—and her motivations are subject to widely varying conclusions. Kate Croy is one of the first protagonists in American fiction within which an author suggests the interaction of conscious and unconscious mind.

One of James’s most famous tales is “The Turn of the Screw,” first published in Collier’s Weekly, and then with another story in The Two Magics (1898). The protagonist is a governess, working on an isolated and lonely estate in England, who tries to protect her two young charges, Flora and Miles, from the demonic influence of the specters of two former servants. Even though the children skirt her questions about the apparitions, she concludes the children really see them. When she tries to exorcize their ghostly sway, Miles dies in her arms.

The story prompted a debate over the “reality” of the traces and whether her visions were only hallucinations. Early in his career James had scorned “spirit-rappings and ghost-raising,” but in the 1880s he became attentive to the unconscious and the supernatural. Virginia Woolf thought that Henry James’s phantasms had nothing in common with the violent old ghosts and Edmund Wilson concluded that the story was “primarily intended as a characterization of the governess.”

One of James’ lasting examples of early magical realism in his short fiction is “The Jolly Corner.” He presents a mystery for the reader to solve—and ample reason to return for an alternative solution. The central ambiguity is about whether the protagonist, Spencer Brydon, has been hallucinating entirely on his own accord as he struggles with his feelings and perceptions about his “other path” that might have been had he not stayed on Europe for the last twenty years or if he has been teased into tracking and confronting his doppelganger through a delicately orchestrated hoax by Alice Staverton, a woman whose best years were very likely spent waiting for him to return from Europe.

James’s work spoke to a limited audience of educated readers in his time, but after his passing, some American critics expressed enmity towards him for his long expatriation and his naturalization as a British citizen.

However, James is valued today for his psychological and moral realism, his masterful creation of characters, his playful humor, and his command of the language.

In addition to his prolific production of fiction, James was a well-established literary critic and a major contributor to the history of the development of the modern novel in that his essay The Art of Fiction (1884) argued that freedom in a writer’s choosing both content and approach would provide the basis for the extension of vigor in narrative fiction over time.

A FEW OF HENRY JAMES’ QUOTES

“A novel is in its broadest sense a personal, a direct impression of life: that, to begin with, constitutes its value, which is greater or less according to the intensity of the impression.” (From The Art of Fiction, 1885)

“It is a real stroke of luck for a particular country that the capital of the human race happens to be British. Surely every other people would have it theirs if they could. Whether the English deserve to hold it any longer might be an interesting field of inquiry; but as they have not yet let it slip the writer of these lines professes without scruple that the arrangement is to his personal taste.

James wrote in 1908 that “Peter Quint and Miss Jessel are not “ghosts” at all, as we now know the ghost, but goblins, elves, imps, demons as loosely constructed as those of the old trials for witchcraft; if not, more pleasingly, fairies of the legendary order, wooing their victims forth to see them dance under the moon.”

“To be completely great a work of art must lift up the heart.”

A FEW COMMENTS AND QUOTES ABOUT HENRY JAMES

“Despite the scruples and delicate complexities of James his work suffers from a major defect: the absence of life.” — Jorge Luis Borges

“Please tell me what you find in Henry James. …we have his works here, and I read, and I can’t find anything but faintly tinged rose water, urbane and sleek, but vulgar and pale as Walter Lamb. Is there really any sense in it?” –Virginia Woolf writing to Lytton Strachey

E.M. Forster criticism of James included his queasiness in the writing about sex and labeled his style as opaque because of his reliance on long sentences and “Latinate language.”