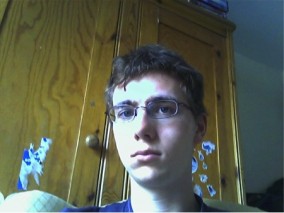 When I meet Leo Shipp (author of Pick), he is in his garret; humming, reading an atlas. “When did you read Crash, by J.G. Ballard,” I interview him. “University,” he says. “Please,” I say, “stop humming.”

He hums all the more tenaciously. I realize his atlas is missing its countries. “Why Crash,” I interview him. “Hated it,” he concludes. “I was obsessed with all things ‘postmodern’,” he continues, “at the time. I made a list of things to read. It included things like Infinite Jest, which I bought, and haven’t yet opened; for reasons I’ll soon get onto. My favourites? Donald Antrim, Hundred Brothers; Martin Amis, Money; and Smuggler’s Bible, by someone-or-other. Joseph McElroy, I think,” he thinks. “Then I read Crash,” he continues, “and it was physically, mentally disgusting. To read it was some kind of torture, y’know?”

“You are a very annoying boy.”

“And so,” he continues, conventionally enough, “I finished it, and thought it the worst thing I’d read. So then I read The Atrocity Exhibition, by J.G. Ballard; then Empire of the Sun, by J.G. Ballard. Strange, no?”

“No,” I conclude. “Please,” I interview him, “do go on.” “Damn!” he exclaims, and continues, humming, “now, when I’d finished, I had Ballard inside me. Perhaps that is why the reading had revolted me: it had, in fact, been nothing less than Ballard himself — a cyborg-spirit — penetrating into my brain; slow, like some Cronenbergian device, antique, and metal, shiny, flesh. Now he was in me. I had to get him out. Decided to Pick him out. Funny thing,” he whistles, obnoxiously, “it all came so easy, writing as Ballard. He’s a very distinctive style, which — like so many great artists (Blake, Dickinson, Hardy, Pete Townshend) — is also somewhat inept.” “Ah,” I cry, squirming excited, “and and and yes, one might — one might even — one might go so far as to say, that ALL great artists,” I continue, theorizing, caught on a wondrous notion, excited, “are great, and are loved, for having the most individual minds; those whose personality is best expressed, and most impressed upon us. From Wordsworth and Whitman to Eminem, we love the weirdos who force us to know them.”

Leo Shipp lobs the atlas at my head, where it hits me. Clobbered, I flop to the floor, clattered. I jabber and wheeze, blood. I dust myself off, interview him, “You say it was easy to write as Ballard?” “Yes and no,” he ruminates softly, “most of it came very quick, and direct. But once it was done, I decided to add more elaborate sections (in particular, the Lady Gaga passage), to satisfy the feeling, and make it more postmodern. This required a strange ordeal, of poring through certain parts of Crash, harvesting ‘typical’ words and phrases. Following this, I took an anatomy book out of the library; and made a list of every scientific word pertaining to my nose. The two lists — Ballardian words, nasal words — were then given ‘a stylized sex-act marriage; a destined, longed-for merging of the two, in which were played out the million possibilities that each had concocted in fatal dreams.’” “You’ve lost it,” I reproach, “that is pale, contrived; nothing like what you have writ in the book.” “I know,” he knows, hanging his nose, in shame, like how in the book. “Go on,” I beseech, I interview him. He sighs. “After Ballard, I read a book called Giles Goat-Boy, by John Barth. It was almost 1000 pages long, with small writing, and long blocks of text. Also, it was rubbish. The writing was good, so I was already some 100 pages in by the time that I knew it was crap. By then, I felt obliged to finish. So I did. I finished the tedious book. I’d been devising, and starting to write, my own big postmodern book at the time — Screensic, blending music, films and books — perhaps, one day, I’ll return. But for the long-time being, Goat-Boy killed it. That was the end of my postmodern love.”

He sighs, and wants to wrap up. “I never read Infinite Jest. Suffering from overwork, I was suffering much by the end of my degree (History, BA Hons, First Class). I became more earnest, more wrought in my writing. Also — conversely, for some strange reason — even as my tortured self-obsession grew, I was growing an obsession with other people; the first time in my life. (‘To know another well were to know one’s self,’ as quoteth William Hazlitt; a quote which could be pushed out into more mutual waters.) In especial, I found an obsession with speech. So I wrote a book called The Sufferer’s Home; a novel, with not much by way of plot, but very good, I still think; very fine, but uncommercial. So although some agents praised and encouraged me, none were willing to take it on. I gave up trying. Sad, sad,” he condoles. And goes on, “Now I’ve gone on to work in a school. I’ve recently finished a YA book, which, if I was being crass and not-modest — but no — I’m not-crass, and always modest.”

But I, your reporter, am crass to the max. This YA fantasy book, Genefreaks, I can tell you, is like a cross between Pokémon and Harry Potter, while remaining wholly unique. Also, it has very human interest, almost akin to a soap. “And is it true,” I fawn, I interview him, “you recently sent the book to some agents?” “They rejected it,” he says. “Keep trying,” I breathe. “Thanks,” he snorts, “I will.”

As I am leaving, and as he is humming, he goes back to work on his latest attempt: another YA fantasy book, Mythologitis, about a disease which turns people into beasts from Greek myth. It’s sublime, and is also about friendships and foes amongst teenage girls, who constitute half of the cast. I suppose it will fail — the way of all fish. I suppose he will never stop humming.

Leo Shipp, 23, is a teaching assistant at a north London secondary school. He has had a rap-style poem published in the poetry journal Magma 58, and a few of his older short stories are available to read on Wattpad under the name ‘Yodageddon.’ (http://www.wattpad.com/user/Yodageddon).