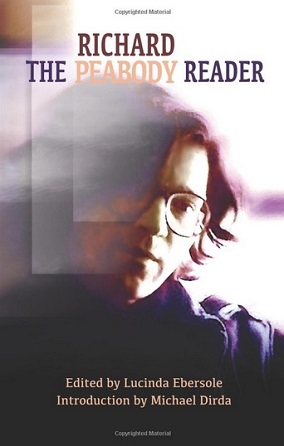 Peabody’s steadfast dedication to that which is new, challenging, innovative and dynamic has won him a wide reputation among writers whose work he has championed. This volume demonstrates those same values, embodied in nearly four decades of fiercely smart, sophisticated, and often very funny writing. From his first collection of poems, I’m in Love With the Morton Salt Girl, to his most recent collection of short stories, Blue Suburban Skies, Peabody has established and developed a thoroughly unique voice, both warm and piercing, to deliver content that ranges from the hilarious, as in the short story “Flea Wars,” to the bittersweet, as in the poem “The Other Man is Always French,” to the elegiac, as in the poem in “Civil War Pieta,” to the absurd, as in the rollicking farce of the short story, “Bad Day at Ikea.”

Peabody’s aesthetic is all-embracing – strands of punk, beat, experimental, feminist, and political protest literary influences blend with the purely romantic to create a body of work that is both profound and pleasing. A writer who never plays it safe, Peabody writes with the urgency of one who thinks that any day might be his last, and with the insights of a life fully lived. Whether addressing fatherhood or unjust wars, unrequited love or suburban malaise, Peabody delivers, with both freshness and gravitas, important information about life as we live it now.

The collection was edited by Lucinda Ebersole, a writer and scholar who has worked with Peabody on several anthologies as well as many issues of Gargoyle, and who applied a deep knowledge the author’s writing and career to the task. A substantive introduction by Michael Dirda, a Pulitzer Prize-winning literary critic, puts Peabody in his rightful place as a great and influential American man of letters, while an accompanying timeline provides important information about Peabody’s life and accomplishments in literature. Richard Peabody is the founder and current editor of Gargoyle Magazine, now on its 61st issue, and editor (or co-editor) of twenty-two anthologies including Mondo Barbie, Conversations with Gore Vidal, and A Different Beat: Writings by Women of the Beat Generation. The author of a novella, three short story collections, and seven books of poetry. A native Washingtonian, he has taught fiction writing workshops at various locations in the DC area since 1985, though primarily for the Johns Hopkins Advanced Studies Program since 1995 where he was awarded The Johns Hopkins University Excellence in Teaching Award, 2010-2011, and the Faculty Award for Outstanding Professional Achievement (Master of Arts in Writing Program), 2005. He has held residencies at Blue Mountain Center, Byrdcliffe, and the Virginia Center for the Creative Arts. He also won the Beyond the Margins “Above & Beyond Award” for 2013.

Lucinda Ebersole is a critic, an editor, and a fiction writer best known for her association with the literary journal Gargoyle Magazine, for which she has been coeditor along with Richard Peabody since 1997. She has also edited various anthologies with Peabody, most notably the various books in their Mondo series. Kathy Acker was a sweetheart. You probably didn’t expect me to say that. Truth will out.

In December 1991, Lucinda Ebersole and I began Twisted Pisces Productions so we could bring Kathy Acker to DC. She’d never read here and told us she’d only been to Washington once before as a kid on a school trip.

When we asked what it would cost to make it happen, she said, “A lot.”

I hadn’t met her yet but had printed an interview with her in Gargoyle #37/38 the year before.  Our British editor at the time, Maja Prausnitz, had approached Kathy in London with a batch of questions we’d all assembled.  Kathy remembered a couple of sweet punk girls coming to visit her and agreed — the gig was on.

Finding Kathy at National Airport on a Thursday night wasn’t difficult. She was 5’ nothing, with dwarf-star white hair, and a black leather jacket that proclaimed “Girl” on the back, spelled out in blood falling from the thorns of one massive rose. The pointy rings on her fingers could scratch your eyes out.

We didn’t really know what to expect but Lucinda had arranged a room in a sleek Capital Hill hotel for her. First the card key didn’t work, and I rushed off to get another in the lobby only to get hit on in the elevator by the most beautiful hooker in the world. I rushed back flabbergasted with a new key card and Lucinda and Kathy laughed. “Why didn’t you bring her back to my room?” Kathy said. The plan for Friday was to divide the day with her. She was so much fun. She told us at one point, “You wouldn’t believe the shit people send me in the mail.” I laughed and told her we’d just had a woman contact us because she could pee like a man and had video footage she wanted to show Kathy. She shook her head. “Would you want to see that?” I asked. “What do you think?” I laughed. “No.”

We’d arranged to have her read on a Friday night at the 15 Minutes Club on 15th and K Street.  I asked poets Sharon Morgenthaler and Reuben Jackson to open for her.

What we didn’t know was that Kathy got stage fright on the day of a performance and was so anxious before a gig that she didn’t eat that day just in case, which would have been fine save for the fact that she had hypoglycemia. Our plan to wine and dine her was out the window. Lucinda called me mid-afternoon Friday and screamed, “She’s yours now, I can’t stand being around her any more.” Lucinda had driven her from bookshop to bookshop as Kathy did a classic Jekyll and Hyde switcheroo.

Right before the reading some nimrod double parked by the front door and sent his 12-year-old kid in to buy all of her books and get them signed. Kathy told the kid, stick around, she’d sign them after the reading. Lucinda and I realized that you can’t have a kid in a bar in DC and convinced her to sign them right then.

I introduced the opening readers to her and she blew them off. Sharon said, “I’m not reading for that bitch.” I spent a lot of time putting out fires. We’d seen the sweet side of her and were totally unprepared for how this was playing out. And then Kathy ripped into me for scheduling her gig in a bar. I’d assumed she’d want to read someplace like this, downtown, with booze. No, she said, why didn’t I get her a university gig. WTF? It had never even occurred to us to pursue that angle, not that we had any connections at the time, not that any local university had ever made an overture to her.

By the time of the actual reading Kathy was a barely functioning maelstrom, a vile smoothie of danger and venom.

Kathy wore a one-off Norma Kamali gown cut sleeveless on one side to display the tats down her right arm. She sat atop the bar and presented one long piece that she said she’d appropriated from a Japanese story and she aimed it that night at “Mayor for Life” Marion Berry. It was dense and difficult and again, not what we’d expected.

When she finished there was stunned silence. I stressed out on anxiety before the entire bar stood as one and applauded.  Just like that everything was perfect.

Now, a lot of people don’t understand that to sell books by a big name author you have to order the books in advance. You have to buy them straight up and after the discount this was the only money we were going to make to offset printing and publicity costs, et al. All of the unsold copies are returned and after 90 days Grove Press would cut us a check.  Needless to say, we really needed Kathy in a semi-decent mood so she’d move some merch. We were selling paperback copies of Literal Madness, Empire of the Senseless, and In Memoriam to Identity.

Lucinda sold books as fast as she could. I gathered fans into a scraggly line and Kathy said, “Where are we eating. I want to eat now.” “But you have to sign books,” I said. She grumbled. Fans held books out, told her how much they loved her, and she didn’t make eye contact or acknowledge them at all, just scribbling her name quickly, all the while her eyes on mine, “What are we eating?”  “French or Chinese. That’s about all that’s open.” “French,” she said. That calmed her a little.  Not being a parent yet, the idea of snacks hadn’t occurred to me.  Kathy seemed to be literally bursting with manic hunger.

That’s when the woman with the pee video showed up and asked me if I’d shown it to her yet.  (It was pretty amazing VHS footage. She could arc it a couple feet like guys do.)  I said, no, she took it, and handed it to Kathy, who looked over her head at me. I kind of shook my head. The woman told her about it and said, “You want to see my tattoo?” and pulled her jeans down revealing everything. We drove to Georgetown, up M Street, and then Wisconsin Avenue to Au Pied du Cochon (which means “With a Pig’s Foot”), which was open 24/7. The three of us settled at a big table near the bar and bit by bit waves of fans joined us. Once Kathy had a salad and some French bread and wine she transformed back into her sweetheart self again. The change was amazing but way too late for Lucinda and me. We were completely fried and nodding out, trying gamely to follow the loud animated conversation that began with Kathy preaching Helene Cixous and “the phallogocentric power structures of language,” travelled quickly through Derrida, Foucault, Baudrillard, and Gilles Deleuze, to French feminists Luce Irigaray, Julia Kristeva, and Bracha L. Ettinger, on to books she’d read, then people she’d slept with, and people everybody thought she’d slept with that she actually hadn’t slept with, and then people everybody thought she hadn’t slept with that she actually had slept with, on to tales of students, and other gigs, and places she’d been, to how much she hated NYC now and how much happier she was in San Francisco, and finally as the sun was rising, landed on non-allergenic makeup, motorcycles, and fitness. Wish I’d had a tape recorder.

Before we said goodnight, Kathy signed books and told us she owed us both thanks.  She really had a great time. Lucinda drove her back to the hotel and then to the airport on Saturday.

By the time of Kathy’s death almost six years later, Lucinda and I were partners in Atticus Books & Music on U Street, where we held a Memorial reading to raise money to help pay off her massive medical bills.  Matais Viegener was trying gamely to keep all of her books and manuscripts together and working to reconcile the estate. David Franks drove down from Baltimore to read along with Bob Angell.

We miss you Kathy.

Richard Peabody is the author of a novella, three short story collections, and seven poetry books. He is a native Washingtonian and teaches fiction writing at Johns Hopkins University, where he received the Faculty Awards for Distinguished Professional Achievement and Teaching Excellence. He is also the Beyond the Margins Above and Beyond 2013 Award winner for his outstanding service to the Washington, D.C. literary community, and he is Eckleburg‘s Patron Saint of Indie. He is the founder and co-editor of Gargoyle Magazine and editor of twenty-one anthologies including Mondo Barbie. His collection of short stories, Blue Suburban Skies, is out from  Main Street Rag Press. Read “Maraschino Cherries,” an excerpt from his collection, Speed Enforced by Aircraft (The Broadkill River Press, 2012).