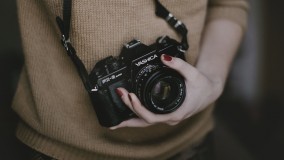 In 1981, the phone rang in my kitchen in Ft. Lauderdale. It was a friend from high school, actually my boyfriend. We went to the prom together, broke up, but remained friends. He told me his girlfriend, Francesca Woodman, had just committed suicide. She was an artist, a photographer. He was a friend of her parents, and after her death, he ended up getting her apartment on the Lower East Side of Manhattan. A few years later, he got married in the Catskills, and both he and wife, I’ll call them Trish and Bob, used the space as their home and their studio. They are painters, photographers and sculptors. Over the years, Francesca Woodman became more and more famous. In 2011, she had a posthumous exhibition at the Guggenheim. I am an unabashed fan of Woodman’s work. Her images are powerful, haunting, but also deeply personal. In attempting to unlock the secret and the mystery of her feminine and sexual identity, she reveals a few universal truths about women—particularly women as seen through the male gaze.

I began writing The Photograph and other linked pieces, shortly after my friendship with Trish and Bob imploded. Prior to our falling out, I’d spent many hours in their kitchen drinking wine, smoking weed and talking about art. I found it ironic that Trish’s paintings, though brilliant, had never been formally exhibited, while the ghost of the woman who used to live there became a celebrated, internationally renowned artist. I wondered if it made a difference—both women had a voice and vision, but only one of them had an audience. Did that make Trish’s work any less significant? Both women created work that was intensely narrative and figurative, both women seem haunted by what it means to be female, and both women, in my view, seem intent on unlocking the secret of their own identity. In one of my favorite paintings by Trish, two Amazonian women, dressed in couture, face off; one brandishes a spear, the other impales herself. One of my favorite photographs by Woodman is a woman who is in danger of disappearing inside of a wall. The comparisons between the two women artists took shape after our friendship ended, and I felt free to explore these issues.

While in real life Francesca Woodman didn’t jump out a window of that building, in my wholly fictional account in The Photograph, she did. In this story, the husband and wife who live in that apartment, in that territory, are completely haunted by the female artist who had once died there. I created this fictional space to explore issues of obsession, love, and the role of the male gaze in art created by women. In The Photograph, the husband works through his grief over the loss of the Francesca character, and his sense of helplessness by photographing his wife, naked, every night for 30 years—at the same window where his lover jumped to her death.

The Photograph is, as I mentioned earlier, part of a linked series of stories that expands upon these themes, and uses multiple points of view, including a female director and an actress—who are now making a movie about these events.

I love using multiple points of view; it’s a very non-linear way to tell a story, and experiments in narrative structure really intrigue me as writer. I studied narrative as a graduate student and found that I couldn’t write a straight up linear story. It just wasn’t fun and it certainly didn’t come naturally to me. After reading critical theory by writers such as Julie Kristeva, Thelma Shinn, and Judith Butler, I learned I could use other techniques to tell a story. Time didn’t have to be teleological, that is, like an arrow shot from a bow, time could travel in concentric circles. I could write beyond the ending, I could escape the emotional pull of the suicidal female protagonist. And maybe this is one of the biggest thematic concerns here; Woodman was 21 when she died, but Trish is still alive and well and painting in her studio. Maybe we should celebrate her as well. I need to tell stories with strong female protagonists who have a voice and a vision, but who are not tragic. As a woman and as a writer, I am just so tired of that trope.

My novella, How to Travel with Your Demons, which will be published by Spuyten Duyvil Press, uses a similar narrative technique.  One simple story is told from multiple points of view; the narrator, the protagonist, the writer, all women, and several demons. I’m also fond of rewriting female protagonists from classical literature and myth. My revision of Eurydice has just been published by Non Binary Review  Recently, I’ve published two essays in the Nervous Breakdown, “Two Views of Apartment 210,” and “The Bodhisattva”.  You can find me on twitter at https://twitter.com/laslugocki.