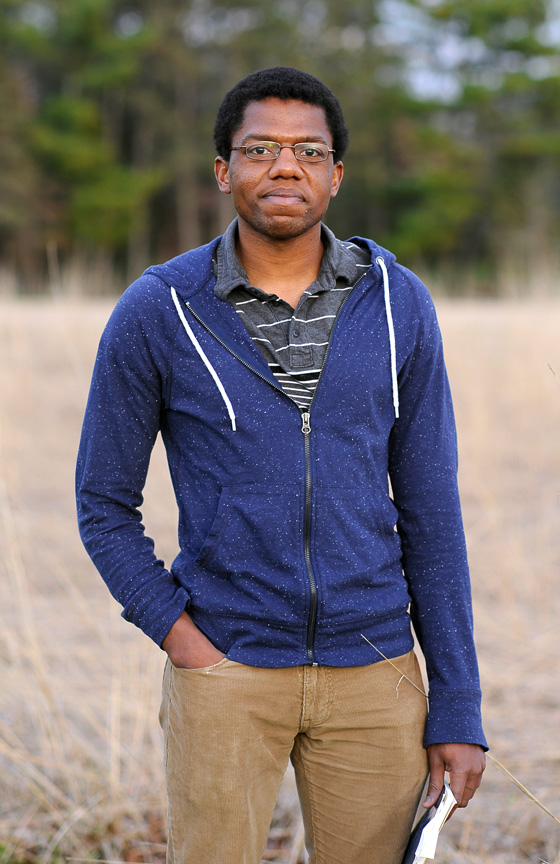 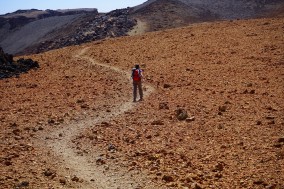 Six am. Wakened by chirping, a succession of three trills, I rush to my desk and turn off my phone’s alarm, or else my phone will shriek, a reminder that it’s time to write something, a story, an essay, to fill my day. I haven’t always been this way. Time/work obsessed. Laziness suited me until I met this ambitious artist. That I mirror her now is strange since I have an identical twin, whom I only mirror physically. Embittered by full-time, low-wage jobs, he’s returned to his alma mater for his second bachelor’s degree, in nutrition or nursing. I can’t remember which. If he’d have focused on a career, on multiple diplomas instead of one, he wouldn’t need to go back, wouldn’t need to sample classes. Look at him: insecure. Sharing classrooms with younger students and falling behind me has made him judgmental, unpleasant. He’s threatened by everyone and approaches strangers with quiet scorn, whisperingly rebuking overweight people or pointing out flaws in a person’s eating habits, their workout methods. This could’ve been me, bitter, unhappy, but it’s not. When the ambitious artist left, plunging me into isolation, I started working. Working. Working. Working.

I started working toward grad school months before I finished college, putting together a portfolio, exploring schools, and so I ripped open my acceptance packet not six months after I walked the stage. Along with grad school, I juggle a part-time job and volunteer work. Mostly I write. Real work. Though much of the time, I’m aimless until I find direction. Focus.

Focusing on relationships, it seems, was my brother’s…undoing, I guess is the word. Bars, movies, dates. All that time with another person distracted him. After he finished college, he accomplished nothing. Relationships, I’ve learned — and his experience confirms this — can fail you. And since I’m considerate enough not to keep people around for when I need company, I’m alone. But the ambitious artist kept me around. I suspect she did so for, I don’t know, her down time. Yes. She used me for her downtime, her break between painting, reading, studying.

In the beginning, during a Seattle sushi lunch, laughing through stuffed mouths over our overeating, our overspending, as we plucked fish wraps from a conveyor belt, she’d announce her sudden need to go home, shattering my plans for the night — snuggled together, watching Breakfast at Tiffany’s,Children’s Hour, or Sabrina. Wait Until Dark if I wanted a jolt. Funny Face if I felt musical.

Why go home? codependent me, tortured.

To paint, callous her. To read, to study. To accomplish something. Anything.

Almost like my brother, I thought. Then a film student, he dove into university, swam in full-time classes and an on-campus job. While I envied his work ethic, I envied the ambitious artist’s even more, and I was confounded by her complaints — in her car, on the way to drop me off, our bellies sushi-stuffed, she’d claim that she hated being so responsible. She wanted to relax, watch a movie. Typing away now, if only I could focus, find a topic, I could relax. Slide back in my chair instead of hunching over my laptop.

A black and white Audrey Hepburn portrait hangs over my bed. She charms in a tiara and pearls, elbow-length gloves, black as her sleeveless dress. Maybe I’ll write about the safety of admiring a dead woman. A portrait, a frozen image, preserves the idea of a perfect woman. Audrey can’t hurt me. Four years, four bedrooms, 54 miles earlier, the ambitious artist hated that portrait more than she hated her overbearing sense of responsibility. How could I send an Amazon seller fifty bucks for a cheap painting? How could I freak out when I scratched it? And where’s that color pencil, the white one she’d given me to fill the scratch?

The artist is threatened, I thought, swelling with delight. She wants her portrait over my bed. A self-portrait, perhaps.

Looking back, I doubt that’s the case. Her bitterness appeared after my mother recovered. My brother and I had been nursing my mother after a botched surgery left her so ill she’d revised her will. One afternoon during those six months of illness, on my way home to care for her, I detoured to chat with my film studies buddy’s girlfriend. Being a shy guy, it was unlike me to approach a stranger. A pretty girl no less. And yet I talked to her, about nothing really, just meandering through common interest until parents trickled up and I revealed myself as a caregiver to my sick mother. A hero.

Even a hero needs a refuge.

I came to cherish the ambitious artist, threw myself into the task of bringing us together. Texting all day, unless we decided to chat online, to forget that my mother was in the next room attached to machines, dying; that my brother was in the other room writing a paper, living; and that I was in between, stagnant, absorbed in an ambitious artist, who slept in my bed when my mother went to New York.

My mother returned, walking again, eating again. Living again. The ambitious artist’s complaints began: all about what had initially amused her. My strange obsessions: cats, tea, Audrey. Aimless and obsessive, I was just like her last boyfriend, except I didn’t snap, didn’t cuss at her or spit on her, which, oddly, seemed more offensive. I wasn’t a man. I wouldn’t stand up to her. I wouldn’t even grow facial hair. Early twenties, unemployed, I hadn’t worked hard on anything. On this, I argued.

What? she asked. What have you worked hard on?

That didn’t count. She wanted to see ambition, which I now have. So much that, tired of movie fests, video games, and hangovers, I ignored my friends until they stopped calling. I blocked my brother, too, from email, from my phone, from Facebook. Blocking is another thing I learned from the ambitious artist. After she left — she couldn’t spend time with a sloth — after overeating, oversleeping, smoking pot, and retreating into cable and movies failed to relieve my loneliness, I dove into college, swam in full-time classes while working on campus, and learned, as I suppose my brother once knew, that when I kept busy, when I owned time, time alone became solitude. In solitude, I could accomplish something. Not anything though. I’m a writer. Trying to figure out what to write about can be its own accomplishment. Its own solitude.

Maybe I’ll write about her turkey neck. How, when she stretched skin beneath her chin, I lied. Said her neck wasn’t gross. Maybe I’ll write that I also lied to my brother when I disagreed with him — she was too skinny, shaped like a starved prepubescent boy. Maybe, maybe I’ll write that, though a New York surgeon had healed my mother, I was afraid to admit I no longer needed the ambitious artist. But who else would accept me, a codependent stunted lazy broke man-child dependent on his mother and envious of his brother? Someone maybe. But no one else seemed good enough, driven enough like the rusted Corolla in which she’d pick me up, an empty Red Bull can in the passenger seat. Around noon. My lazy ass fresh out of bed.

Setting the can into the cup holder, she’d complain that she’d been up since dawn.

Why? I’d ask, on a Saturday, free of obligations, would you — would anyone — do such a thing?

To paint, she’d say. To read, to study, to accomplish something. Anything.

Bernard Grant is an MFA candidate at the Rainier Writing Workshop, Pacific Lutheran University. His work appears or is forthcoming The Nervous Breakdown, Emerge Literary Journal, Barely South Review, and other journals. Originally from Texas, he lives in Washington State. 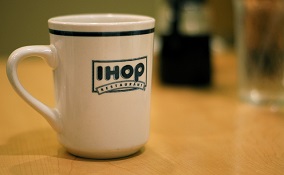 To scare them straight, the men—

threatened to show the boys where they would land if cops or death didn’t catch them first. Stank. Drove a car that stank like them: like liquor, gin, and moth balls in a gym.

squirmed on hot upholstery till the car, stifling, stopped at a light. Darted across three lanes. Rushed through IHOP. Puzzled coworkers. Spilled their story to said coworkers.

welcomed the boys to stay. Speculated: maybe the men were just into their roles. Spotted, over video surveillance, the men come in.

asked, “Where them boys?” Threatened to kill they little asses.

sent the men next door, to McDonald’s, after agreeing that, yes, killing them boys is a good idea. Returned to the boys a minute later. His bald head burned red. Had just come out of jail. Promised the boys he’d kill the men should they return. Was backed by a server, a skinny teen mom, moonlighting as a stripper and a coke dealer, who—

stayed all night. Ordered ecstasy, for the “stress,” the “trauma,” the effects of men trying to kill them. Sat chain smoking in the smoking section till dawn, repeating the story about the men to whomever.

Coddled us. Left us stunted—

Bernard Grant lives in Washington State. He is an MFA candidate at the Rainier Writing Workshop, and his work appears or is forthcoming in Blue Lyra Review, Barely South Review, and Gravel.