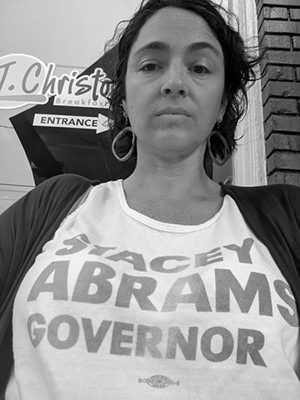 It was past 9:00 pm when our family scuttled out of customs with oversized wheeled suitcases, handheld computers, lunch bags, stuffed animals, and an address. August 2013: we’d just arrived to begin a nine-month stay in Oaxaca, Mexico. I’d received a Fulbright to research U.S. American adults studying Spanish abroad. In the main airport terminal, a group of Oaxacans, waiting for their own loved ones, beamed at the sight of my daughter, reaching to touch her and cooing endearments.

Scared, she buried as much of her fair hair as possible behind my husband’s legs. This was only the beginning. Whereas my son and I have more semitic, olive tones, Liya has her father’s Anglo-Saxon complexion and is what we call “towheaded.” The word comes from the German for “flax,” when the golden fibers or “tow” were compared to very light, almost white-colored hair. Bright blond with blue eyes isn’t uncommon where we live in Georgia. But in a heavily indigenous region of Southern Mexico, my daughter stepped off the plane and began experiencing an excessive, at times frightening, attention that came with being cute, young, female, and white.

Over the following nine months, Liya was regularly likened to a doll, an angel, and a good luck charm. Several times that year, we’d been stopped on the street and asked for permission to take her picture, often by young, beautiful, dark-skinned teenaged Mexican girls. In markets and in plazas, Liya often dodged indigenous women’s fingers that reached to pat her head. When asked if she (too) spoke Spanish as a second language, she regularly answered the interested Zapotec women by hiding or simply saying “no.”

Six months into our stay I’d asked my daughter, “Why do you say ‘no’ when people ask if you speak Spanish?” Enrolled in a local preschool, she’d acquired perfect four-year-old Spanish fluency.

“Because I’m shy,” she smiled, knowing I wouldn’t accept this answer from my darling extrovert with whom I used to sing Spanish Disney lyrics walking down the street. “I don’t know, maybe I just don’t want to talk.”

Another sunny afternoon we spent buying alebrije woodcarvings at San Martin Tilcajete, followed by a seafood meal at Rancho Tilcajete and swimming in the restaurant pool. We watched as a Zapotec man carved copal wood into a fantastic tiger with detachable wings, horns, and tongue. These tiny creatures became brightly colored standing puzzles, staring us down from restaurant shelves. As the desert air warmed in midday, we took advantage and swam in our clothing, knowing it would quickly dry before the long bus ride back to our city center home.

It was sunny and the water was cold, but Liya was determined to get in. Against the blue sky and mountains, we watched a flock of vultures circling the fields. Liya dangled her feet over the pool’s edge.

“Why do you want brown hair?” I laughed, thinking of the expensive irony of my own salon highlights.

“So people stop telling me I’m beautiful. I don’t like it.”

As I interviewed U.S. Americans studying Spanish in Oaxaca, I’d spoken to several older “gringos” who also wrestled with racial identity in Mexico. “I call it the rubio effect,” said fair-haired Sandy in her late fifties who’d moved permanently from Utah to Oaxaca to make her retirement home. She referred to the “blonde effect,” but she didn’t add “dumb.” She explained that by her looks, most Mexicans would assume she, like so many U.S. Americans visiting Mexico, wouldn’t know any Spanish. Despite many years of Spanish language study, and high proficiency after years of living abroad, she said in many new encounters, some Mexicans would fail to “understand” her and that comprehension was more about her looks than her proficiency.

Ironically, two others I interviewed, an African American and Asian-American woman, both single, complained about the “morena” (dark-skinned) effect. “For most Mexican men, if you’re white, that seems to have far more value,” one said. The other complained that too often, she felt invisible compared to more fair-skinned gringas in encounters with both men and women. Both women cited many examples of racial discrimination against both themselves in Mexico and other darker-skinned Mexicans who appeared more “indio” or indigenous. About eating with a new Mexican friend, an attorney, one woman remarked how awful it was to witness the way a professional-class woman communicated with staff in a restaurant: “They’re usually darker, and it seems like the darker [the wait staff] are the worse she talks to them! They have some color shit going on down here!” Here, there, and in many languages, intersections between race, class, gender, and language impact when and whether one feels visible in positive or negative ways.

“Why do Mexican people have dark hair and brown skin?” my son, Oren, asked a few weeks into our first stay abroad.

I remembered the book, All the Colors We Are: The Story of How We Got Our Skin Color by Katie Kissinger. On its cover was a wreath of differently shaded arms artfully arranged on the floor. I asked my daughter and son to hold out their forearms and compare our three colors. “Oren, see how you and I are a little darker than Liya? That’s because we have a little more of something called melanin.” I talked about the different origins between his father’s people and mine: Scots-Irish and nomadic Eastern-European Jews. I recalled the geographic lessons in the book. “Because Mexico is closer to the equator and there’s more sun. So people’s skin, hair, and eye color adapted to protect them from burning too easily.”

“Yeah but your skin also has a lot of brown dots, Mommy.”

“That’s because I didn’t do a good job using sunscreen—that’s why I’m trying to do a better job protecting your skin than I did with mine, so you don’t get so many of these—they’re called sunspots.”

This was an unforeseen bonus—talking about race and geography coinciding with a health  lesson on the importance of sunscreen.

“You see, our ancestors were from much colder places, so that’s why we have lighter hair and eyes. We didn’t need as much protection from the sun there as we do here, especially your sister!”

This explanation seemed to satisfy their curiosity, and several times since, each child has referred to our cold-climate origins, despite the fact that both were born—May and August—in the ninety-plus degree Georgia humidity.

Since returning to Georgia, my children are in public schools and susceptible to ongoing stereotypes about what it means to be “white” “black” or “brown.” Speaking Spanish to my daughter in a store, a Latina clerk responded with relief, followed by familiarity: “Oh, Miss! At first I thought you were white!” At times, speaking another language felt like winning at the game of race. Speaking Spanish seemed, at times, to give us permission to pass in more diverse social circles, moving away from assumptions regarding Whiteness and monolingualism. Yet the languages of our racialized experiences in the U.S. also continue to gerrymander our minds and bodies. When my children share an observation that “mostly Black kids get in trouble in school,” I worry about the invisible lines being drawn around and through them, fixing what ought to be fluid and untranslatable. I recall feeling speechless in 2001 when I first moved from Philadelphia to the South and my landlord drawled about my own “exotic dark looks” after learning I was Jewish. I had never felt the conflation of dialect, race, and religious identity in the same way before. Just as with learning a language, there is no end game when learning how to talk about differently racialized experiences in the U.S. and elsewhere. Only the language of poetry seems capable of articulating the nuances.

In a series of poems inspired by Juárez’ 1715 “casta paintings” on race in the New World, the biracial poet Natasha Trethewey (2012) writes of the “mulatto” in “De Espanol Y Negra Produce Mulato”:

The boy is a palimpsest of paint—
layers of color, history rendering him

that precise shade of in-between.
Before this he was nothing: blank

canvas—before image or word, before
a last brush stroke fixed him in his place.

When one acquires a new world language, one learns to see the canvas of language and thought anew. In learning Spanish, one can see how status and gender can be visibly built into the language system where one discriminates which “you” (of peer status or higher status) in different verb conjugations, based on power and relationship. Studying non-English languages can offer learners superhero-like insight into ways in which difference and discrimination have been built into the walls of our grammar and vocabulary. Invisible to monolingual eyes and ears, bilinguals acquire “code” and “Code,” learning to speak but also learning to be in new social systems that alert us to beliefs and values communicated through language. These new environments give learners important information upon which to reflect on the home systems, to be able to see what may have otherwise remained invisible.

In a society so desperately torn apart by race-related violence and injustice, world language education can offer much needed intellectual and social courage for stepping outside ourselves and reflecting. Spanish is one such ideal language. However, I believe all non-English languages offer U.S. Americans unique opportunities to adjust assumptions, experience outsiderness or culture shock, to step outside of the self and see “home” through new perspectives. Essential for such reflection to take place is an experienced guide—a world language educator—who has crossed these thresholds and is comfortable having conversations about difference that students may have never had before. The language teacher can begin discussions in the language classroom, which can become lifelong lessons in how to live in an increasingly globalized, multilingual and multiracial world.

MELISA "Misha" CAHNMANN-TAYLOR, Professor of Language and Literacy Education at the University of Georgia, is the author of Imperfect Tense (White Point Press, 2016), and co-author of three books, Teachers Act Up: Creating Multicultural Learning Communities Through Theatre (Teachers College Press, 2010) and Arts-Based Research in Education (Routledge, first edition 2008; second edition 2018). 2018 she was the plenary speaker at the English Teachers Association of Israel in Jerusalem. Winner of three NEA “Big Read” Grants (Robinson Jeffers, Edgar Allan Poe, Yu Hua), the Beckman award for "Professors Who Inspire Social Change," and a Fulbright for nine-month study of adult Spanish language acquisition in Oaxaca Mexico, she is also the poetry editor for Anthropology & Humanism and judges the journal’s annual ethnographic poetry competition. A graduate of the New England College low-residency MFA program and the University of Pennsylvania’s Educational Linguistics doctoral program, her numerous poems, essays, and articles about language learning have appeared in the Georgia Review, American Poetry Review, Women’s Quarterly Review, Cream City Review, Barrow Street, Puerto Del Sol, Mom Egg, Anthropology and Humanism, Language Arts, TESOL Journal, and many other literary and scholarly homes. She posts events and updates at her blog http://teachersactup.com. She lives in Athens, GA with her husband and two children.