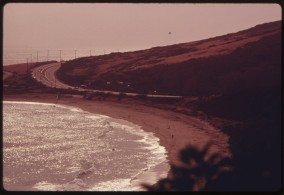 This poem began, as many of my poems do, with an image. Not just an image, but the words to express them, as well. “Maria is under the sink again.” The sentence lodged in my mind, rattled around in there as I thought and wrote about other things — whether there was milk in the house for my daughter’s breakfast, how to push through a tricky spot in a story or poem I was writing, how to fake enthusiasm for an editing client’s boring prose. “Maria is under the sink again” rumbled there, a bass note below the more pressing music of everyday life.

Within days, the phrase accrued other images — the broken glass of a tall votive candle on the floor, the strange darkness of an unfamiliar apartment at night, the black eyes that managed to look blank and intense at the same time. Each one drew me back to a night many years ago, when I was called upon to help a young woman who had lost the ability to help herself.

Another Ocean is based on a personal experience. Her name really was Maria (I will use actual names here because they are so common and widespread). The suspicious landlord was true to life, too, as was the sensation of standing amid shadows that didn’t delineate light from dark, but dark from darker against the wall, but there are elements I don’t remember. Was it a studio or one-bedroom apartment? Did we sit on a couch or a bed? Was there really a billboard hanging right over the parking lot of the building? Was the 10 freeway really only a block or two away?

Those aren’t the details that matter, though. It’s the ones that have been etched in my mind that have left their mark: how my friend, Jim, and I stood on the exterior walkway that ran the length of the building and pounded on the door. How I sent him — the immediate source of Maria’s distress that night — away once the landlord let us in. How I entered on my own. I remember how her eyes bored into me, trying to communicate the profundity of the message of love that the voices in her head were communicating to her. I remember how slight her wrist felt as I laddered band-aids over the cuts she had made there, and how the EMTs, who had seen far worse and were on just another night’s shift, commented on my handiwork before they took her away.

I never did see her again, which lies at the core of my motivation for writing the poem. Maria and I weren’t close. I wasn’t there at her door desperate to get inside because we shared a special bond. I was there because Jim panicked and called me to help him. If I ever knew the reason he chose me over our other friends, I have long forgotten it. Perhaps he wanted a woman with him, or maybe he knew that the other young men in our small circle were as feckless as he was.

We had all moved to Los Angeles after finishing college to attend graduate school. We gathered in the evenings at Kings Road Café to read, grade student papers, and gossip about the more colorful characters in our departments. Still in our twenties, we were no longer children, but we weren’t yet the adults we would eventually become.

Many people experience early adulthood as a time of expansive inquiry. We grab it as an opportunity to fully and finally separate from even the echo of parental mores and beliefs. We strike out on our own. Perhaps it’s a tragedy, or just a sad irony, that it is also a time of life when many mental illnesses first become apparent, as well.

The two converged for Maria. She was brilliant, one of smartest people I knew. She was also fragile, with a history of mental illness and suicide attempts. So when she became involved with Jim — who was not exactly boyfriend material at the time — and went off her medications, she became agitated to the point of harming herself. Jim didn’t cause her to cut herself. Her vulnerability made her unable to address even the most common of situations — romantic disappointment — any other way.

Which is how I found myself driving through the dark streets of a Los Angeles we don’t see on television. There were no mansions, no swaying palm trees lining streets with perfectly manicured lawns. None of the pop culture clichés of California living held true there. Instead, it was full of squat, uninspired mid-twentieth century apartment buildings full of people like Maria (and me). They were students on tight budgets, struggling actors, families who couldn’t afford anything else. It lay only a few miles from the Pacific, but there was no hint of salt in the air.

There was something about the confluence of all those elements — our youth, the shabby streets at night, the urgency of Maria’s plight — that lodged in my mind, even though it all happened so long ago, and I have moved, if not far away, then into a different LA, and a vastly different life.

Maria was taken to the hospital, then pulled out of school by her parents. A couple of years later — memory places me back at Kings Road Café, but memory is often faulty — I learned that she had married and had a baby. That was the last I heard of her.

After the paramedics took her away, I went home, got up the next morning, and went back to my studies. It’s not that the experience of sitting with Maria, trying to keep her relaxed until the professionals arrived, didn’t leave its mark on me. Even if the cuts she inflicted on herself weren’t deep enough to kill her and could be covered by a full box of band-aids, I helped save her life that night. It was that suicide attempt that ultimately led Maria to get the treatment she needed. I’m grateful to have been given the opportunity to be there, the right person in the right moment, but it didn’t have a lasting effect on my day-to-day existence.

We shouldn’t trust memory. It’s an imperfect system for organizing the narratives we tell ourselves about our lives, and yet it is all we have. “Another Ocean” can’t duplicate the events as they were. Too much time has passed. That’s why I chose to use 2nd-person address in the poem. Because although it was an experience that happened to me, I am no longer the person to whom it happened.

Still, this, like many of my poems, is drawn from a particular memory, not because I want to memorialize myself. Rather, I believe that we can access the universal through the specific. What I shared with Maria that night was an unexpected, if brief, intimacy that was only possible in that place and at that time.

When I wrote Another Ocean my aim was to capture something of the intensity of that period of life, after the cocoon of childhood has broken open, but before the responsibilities and sometimes numbing routine of adulthood takes hold, as well as its fleeting nature. It is then, when so many of us are trying to sort out who we are and who we want to be, that these moments of high drama, some frivolous and others deeply serious, abound. Some of them influence the direction our lives will take. Others speed by like cars on a freeway.

It is with a deep sense of gratitude that I can say I have never suffered from auditory hallucinations. But I carry voices around in my head too. What else should I call living with a single phrase—“Maria is under the sink again”—jangling around among all the other thoughts that flit through my consciousness until it coalesced into a poem?

When I stop to think about it, my “voices” do mirror Maria’s in one way. For a poem of mine to succeed it has to originate in that small voice inside my head, one that stays calm beneath the agitated maelstrom of thoughts and impressions, and is animated by curiosity and engagement. Maria spoke of love. Likewise, each poem I write, no matter the subject matter, is a love poem to this wild, unfathomable world into which we have all been thrust.

Michal Lemberger’s poems have appeared in Daily Poetry, The Bellevue Literary Review, The Rattling Wall, poeticdiversity, and elsewhere. Prose has appeared in publications including Slate, Salon, and Narratively. Her collection of short stories, After Abel, will be published by Prospect park Books in 2015. She lives in Los Angeles with her husband and two daughters.
Michal Lemberger

Michal Lemberger, finalist for the Bellevue Literary Review’s Marica and Jan Vilcek Prize for Poetry, is a writer, editor, and lecturer. Her poems are forthcoming and have appeared in The Rattling Wall, Ink Sweat & Tears, poeticdiversity, NY______, and elsewhere. Prose has appeared in Slate, Salon, Narratively, and many other publications. She lives in Los Angeles with her husband and two daughters.