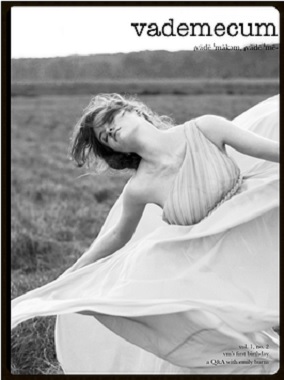 Vademecum Magazine publishes poetry, prose, creative nonfiction, one-act plays, and black and white photography authored by teenagers. The editors at The Doctor T.J. Eckleburg Review are jazzed about this even though we are no longer teenagers. Due to our undying admiration of Vademecum, we were tickled when we had the chance to interview the founding editor, Madelyne Xiao, to learn how the magazine started, as well as to discuss how vital it is to have a thriving literary scene for young adults.

Madelyne Xiao: I began sending my work to litmags in my sophomore year of high school. Before that, writing was, for the most part, an isolated process–most of my poems and short stories began and ended their lives in some remote corner of my mind/desk drawer. Then, some of my pieces were accepted by Crashtest, The Blue Pencil, and Polyphony H.S. I think I hit my stride with this first series of publications, and I’ve been running on this high ever since.

Also, reading. I’ve always been a voracious reader, and I cite Rimbaud’s Une Saison En Enfer, anything by Zadie Smith, and Nabokov’s Lolita as influences. I love language – mixing language, especially – and would like to be tetra-lingual someday (French, English, Chinese, and…Esperanto!).

DTJE: What inspired you to start this magazine?

MX: After a point, I realized that I’d submitted to a great deal of the litmags that were geared towards high school/college audiences, and I was struggling to find other magazines with this kind of niche focus. Naturally, I’d tried submitting to adult litmags, but I soon realized that I’d have to fight seasoned writers and editors for a few inches of ink. I wanted to provide younger writers with a polished, elegant publication that’d do justice to their work, that wouldn’t punish them for lack of experience or the kind of bio that only comes with age.

DTJE: How did you arrive at Vademecum as the title? Was it due to the poem?

MX: The poem by Billy Collins, yes! I’d been reading some of his poems at the time, and I loved the simplicity of this particular piece: “I want the scissors to be sharp/and the table perfectly level/when you cut me out of my life/and paste me in that book you always carry.” Vademecum’s supposed to be the quintessential, the absolute. In a sense, Vademecum litmag promises to present a few fragments of its submitters’ lives to its readers; we hope we do these fragmentary beauties poetic justice.

DTJE: How do high school students hear about your magazine to submit their pieces?

MX: We started out with flyers on street corners and mass emails to arts schools. It seems as though our influence has grown – we’ve received submissions from all corners of the world. Vademecum is also being carried by three independent bookstores (in Baltimore, NYC, and Chicago), so there’s that, too. Otherwise, we try our best through word of mouth and social media (Twitter, facebook, tumblr, etc).

DTJE: Do the authors have to be enrolled in high school to submit? Or do they just have to be within a certain age range?

MX: School situations tend to vary – we’ve received submissions from gap-year students – so we stick to a loose age range of about 13-18. Oftentimes, there are exceptions, which we’re only too happy to make for the sake of an excellent submission.

DTJE: What angle or voice are you hoping to capture?

MX: We shy away from the kind of maudlin sentiment that’s so often (and, very unfortunately) associated with teen writing. We shy away from centered poems, contrived rhyme, and cliché subject matter.

We embrace the sharp, the fresh, the recklessly creative. Many of the poems we accept are experimental in style, execution, and content. While we say that we look for the “transcendent in the mundane,” the phrase endeavors to turn thought inward, downward – look for depth in the simple, rather than sweeping, florid philosophizing. Surprise us. We (the editors) are here to learn.

DTJE: How often do you publish your magazine?

MX: We aim to publish quarterly, though this first year of our life has been a bit erratic (two issues, instead of our target four). We’re looking to make up for this loss in our second year.

DTJE: You’re selling your issues and subscriptions. What made you opt for this method instead of one where all submissions are free to read by the public?

MX: We promised ourselves and our submitters from the outset that a real, tangible paper publication would be our reward. And we’ve kept that promise, thus far. There’s something about an ink-and-paper litmag that an online mag just can’t match.

Unfortunately, the tradeoff is that we’ve got to charge for our subscriptions and issues. In order to break even, or something remotely close to that, we use funds from subscriptions to cover costs of printing, mailing, distribution, etc. Ideally, we’d distribute Vademecum to the wide, wide world in truckloads, and free of charge. But the editors are a motley assortment of teenagers in various states of pennilessness, so we’ve turned to paid subscriptions.

DTJE: What is on the horizon for Vademecum?

MX: We’ve got issues 3 and 4 coming out (this month and this spring, respectively). Also, there’s the chapbook contest, which closes in March. It’s an unprecedented opportunity for writers in this age group. Publication of an independent collection, and placement in bookstores!

Additionally, we’d like to open our door to editor applications, particularly poetry and prose readers. We’re always seeking to expand our staff, and interested students may find more information about applications at our website: http://www.vademecummag.com/#!edit/c21o1