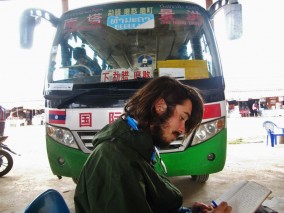 You look back on your work a year after you wrote it and think, God, I know exactly where all that came from. Small, daily things grow and grow until they become something separate from your life, something more interesting and not “for you” anymore. Contrary to what I imagine popular opinion to be, I suspect those it-really-happened nuggets at the center of the images they inspire are the life of the images; I suspect they’re the reason the images work, if they do. Because they were once lived.

Case in point: Not Easy to Buy a Bus Ticket was written during a time of travel and transition, when I was moving from Boulder, Colorado to Corvallis, Oregon. The series is about a drifter, a man who is traveling across the country with no set purpose, investing meaning in the little things with lyrical descriptions of them. The year before I moved to Boulder, I had traveled in Southeast Asia, India, and Nepal for about ten months. I had been on a lot of buses. This sense of being comfortable only when you’re moving: that sense was mine for a long time. It might still be.

It’s not just the sensibility behind the piece that was influenced by a particular place and time. The details, too, are drawn from my life. The homeless men and women in these stories (at one point described as a “militia”) are there because of the people who lived in Boulder’s central park, which was across from the grocery store where I was a cashier. They came in to the store often, mustering change to buy canned sweet tea. There was so much community among them, but also such palpable tension; I wanted to understand what brought people to that park and what it was like to live there.

Or in “The cars swung by regular“: the narrator gets hit by a car. I wrote that short after I got hit by a car while biking across a crosswalk in broad daylight. A woman in an SUV slowed down at the flashing crosswalk lights, but didn’t see me. Her bumper caught the tail end of my bike and I flew off of it into the grass at the side of the road. All the things that the woman in the story says are true. I had to write it. I was so angry; I had this pained energy rushing through my body all day. Then, when I made the scene happen to the narrator of Bus Ticket, my anger seemed farther away, someone else’s. Easier to deal with somehow.

Or in another line from “The cars”: “Do not ask compassion from the desperate.” During a poetry slam at the Mercury Cafe in Denver, an older man performed a poem with that line in it. I couldn’t forget it, this quietly magical night at a bohemian café in Denver bound by that line. It seemed to unite my short-short story, too.

It’s oddly cathartic, this act of putting a veneer on the things that actually happened to you. The act of exaggerating, even, of channeling emotions you feel into larger characters, more coherent narrative arcs, in order to make them palatable. It feels a little like cutting off pieces of yourself and cooking them into a meal, so that your guests don’t know they’re actually eating pieces of you.

What the guests don’t tell you: they know there are pieces of you in the stew. This is what they came for.

Dennis James Sweeney’s fiction is forthcoming in The &Now Awards: Best Innovative Writing, Hayden’s Ferry Review, and Indiana Review, among others. He is the author of What They Took Away, winner of the 2013 CutBank Chapbook Contest. He lives in Corvallis, Oregon.

Dennis James Sweeney's fiction, poetry, and essays have appeared in The &Now Awards 3: The Best Innovative Writing, Bellevue Literary Review, Crazyhorse, DIAGRAM, and Indiana Review, among others. He is author of the chapbook What They Took Away, and lives in Corvallis, Oregon.