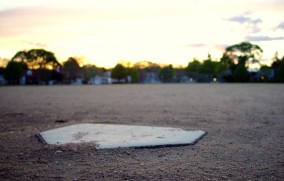 Sometimes you hear a little rattle in your head, and then it gets louder and louder. Eventually, you can’t ignore it. Gertie and the Babe is a story that “I knew” for a while before I bothered to write it down. Where did it come from? I don’t have a clue.

A French friend has asked if it’s a form of homesickness: an expatriate writer imagining baseball. Possibly. But to my thinking, it’s less a matter of trying to recapture a place (I sometimes quarrel with realism) than to create a new space, a sturdy little box for some of the curious workings of the mind.

Besides, I’m not sure what “expatriate writer” means anymore. When I left Iowa City many years ago and moved to Paris, it wasn’t an artistic choice. I was just a guy who’d fallen in love with a French woman and had followed her back to her home country. I found a job and, in my free time, worked hard on my writing. I didn’t spend my days hanging out at cafés, pretending to be bohemian. Life was too busy. The romanticizing attached to “The Lost Generation” of the 1920s struck me as rather corny, and it still does. Gertie and the Babe pokes fun at some of those images.

But I will mention a crucial incident from those days, one that was formative in my development as a writer. It happened after I’d written a short story that I believed was my best work yet. I thought of it as my “breakthrough” story. I was exhilarated and suddenly able to put away self-doubt and tell myself, with some relief: Yes, I am a writer.

As was the custom in those pre-Internet days, I ran down to the local photocopy shop and then stuffed envelopes and sent the story to the top dozen magazines in America, both glossy and highbrow. I was full of hope that the story’s merits would be apparent to at least one of these magazines, and it would find a home. That’s how I thought of it: a home.

And waited some more.

Now, this part wasn’t a new experience for me. I’d submitted work before, played transatlantic ping-pong with my manuscripts. And I was no stranger to rejection. Often they were form rejections, but sometimes they were encouraging rejections, with invitations to try again. The latter were precious, bittersweet missives from New York that I analyzed excessively. But now, I believed, a new phase had started. This time would be different because I’d written such a good story!

I waited some more.

Typically, replies from editors arrived in a piecemeal fashion, perhaps one or two a week. After a rejection, there was always the consolation of knowing that the work was still out there, that the game wasn’t over—maybe, I imagined, at this very minute, another (certainly more perceptive) editor was reading the manuscript with a rapt expression of awe and wonder. Just wait till I get that reply, I thought.

I waited some more.

Then, in the third month, a new development: a massive strike in public services paralyzed France. It was the most serious social unrest since 1968. I remember the television news showing enormous stacks of undelivered mail piling up at post offices and in sorting warehouses. Somewhere in those mountains of envelopes, I just knew, was a very special one, the confirmation of the promise of a home.

Eventually, the strike ended…well, almost. A few Parisian neighborhoods were still blocked by holdouts from the CGT union. This included my street. (I swear I am not making this up.) By then I was indulging in magical thinking. Yes, the fates were testing me, even toying with me, but in the end, when gratification came, wouldn’t it be all the sweeter, since I’d waited for it so long?

The great day arrived. Postal delivery was restored. The concierge dumped an enormous pile of mail on my doorstop.

Hastily I sorted through it, tossing aside junk mail and personal letters from family and friends, winnowing it down to a neat stack of my easily recognizable SASE correspondence. The last time I’d experienced such anticipation was probably when I was three years cold, hurrying barefoot down cold stairs to see what was under the Christmas tree.

Before this day, as I said earlier, I’d been rejected. The experience was nothing new to me. But somehow the cumulative effect of greeting so many rejections, one after another, their pounding regularity, hit me very hard. It certainly wasn’t something I could shrug off or rationalize.

My initial reaction? It probably wasn’t much different from a three-year-old’s.

It felt impossible to stay in that place. So I was out the door and down the steps and out on the street, walking blindly with long strides without the slightest idea of where I was going. I just kept moving, as if I could flee not just the stack of letters but also the thoughts in my head, such as: who did I think I was fooling? How could I be so presumptuous as to believe I was a writer? What a sucker! What a self-deluding narcissist!

I walked and walked, across the river and looping aimlessly through the 12th and 11th arrondissements through unfamiliar neighborhoods of people trudging out of Métro exits, shopping out of yellow-lit stalls, going about their lives. Paris is a great city but never had it looked so cold, so indifferent, so emphatically unromantic. It was just an agglomeration of squeezed buildings and sidewalks with lots of dog shit to step around. I had no business here as an artist. That was pure fantasy.

What could I do but keep walking?

The truth is, though, after a time, a person gets tired. You have to sit down. A moment came when, footsore and exhausted, I needed to take a break. So I stopped at a café and ordered a drink. By then I was wrung out and ready to say Fuck it. Yes, and Fuck me. That much was clear. For a while I didn’t think much of anything but just sat at my table, watching the people around me.

And then—well, nothing much. I drank my beer. People came and went. Everyone eyed each other sideways. That was it.

Until I realized what I was going to do next.

I reached into a pocket for a scrap of paper. And I fished in other pockets until I found, to my relief, a pen.

And I started to write a story.

It surprised me but, at the same time, nothing felt more natural. Inevitable, even. It was a new story, slow but steady jottings that grew smaller and curved around the edges of the paper when it became clear that I was on a roll and would need to economize space. Perhaps these words came from a hysterical place inside me, or maybe they were merely reflexive, like a sneeze. I don’t know. I don’t understand the mystery of origins.

But this much I know: I could not not write them.

And how does the story end? Not that story, but this story?

It would be pretty if I could say that on that day, in that café, I began my true “breakthrough” story, the one I’d so dearly hoped for. That story was a success. In a moment of psychological pressure I rose to the occasion and finally wrote something that connected with others.

That would be a happy ending, wouldn’t it?

But the truth is, that story went nowhere, either. It was later rejected, it never found a home. It didn’t in some neat way vindicate my earlier efforts.

The truth of the story I’m telling now lies elsewhere. It’s not so pretty, not so convenient, but it’s not unhappy, either.

Because now I see what happened as an expression of a loyalty to a place. Of course I was wrong to put too much value on publishing, on what other people thought. But I was right, in some ways in spite of myself, to sit down and write, in effect, a letter home. This home wasn’t in Paris or New York or Iowa City. (It still isn’t, and it’s not in the vast ocean of the Internet, either.) Rather, it was a place I had to make myself, come what may, with words.

If you want to come inside and be my guest, you’re welcome. I would be glad to have you. But if you choose otherwise, that’s OK, too. I’ll carry on. A person has to live somewhere.

Charles Holdefer is an American writer currently based in Brussels. His work has appeared in the New England Review, North American Review, Slice and other magazines. He has published four novels with the Permanent Press and is now at work on a new novel. More information is at www.charlesholdefer.com.

Charles Holdefer is American writer currently based in Brussels. His fiction has appeared in the New England Review, North American Review, Chicago Quarterly Review and in the 2017 Pushcart Prize anthology. His recent books include GEORGE SAUNDERS' PASTORALIA: BOOKMARKED (nonfiction) and AGITPROP FOR BEDTIME (stories).