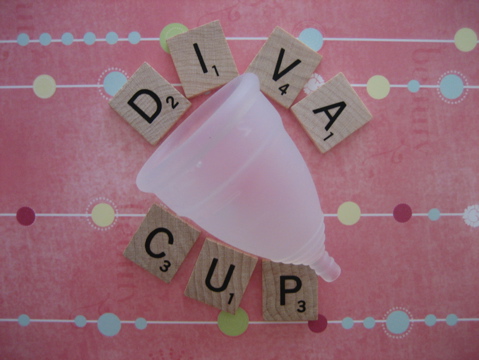 I don’t want to write about nature in the same way that I don’t want to put in a tampon. But I’m still bleeding, and even if I try to avoid feminine hygiene products because they bug me, the blood will still come. And I can’t avoid the fact that these beautiful mountains surround me, that they urge me to write about them, even though I’m not a nature writer. But here they are, beckoning me to put them to use.

I hate tampons. The thought of sticking a wad of cotton up my who-ha makes my skin shiver. Instead of dipping into nature writing via the mountains that are plopped down in front of my eyes, I think I’ll write an essay about menstrual blood. What could be more natural than that? But tampons aren’t natural, but I’m also sure as hell not going to old-fashion style it by safety pinning cloth to my underwear.

The mountains raise their eyebrows at me.

I had a Diva Cup for four years, and I loved it. “What’s a Diva Cup?” you may wonder. Imagine a rubber conical shaped shot glass with a stem on the bottom. It stays inside your vagina and can hold up to two ounces of blood—which is all anyone really bleeds in one week. So technically you could keep the Diva Cup inside you for the length of your period, but there is the chance it could overflow, which would just become messy and uncomfortable. Like not wearing a tampon when you really should.

To put the cup inside of you, you have to bend it in half, squat above the toilet, and shove it inside. Then it suctions open and wraps around your cervix. Because of the suctioning aspect, I can’t use my Diva Cup anymore. I have an IUD (intrauterine device), and the subsequent suctioning out of the cup could also pull out my sperm-blocker. I don’t actually know how the IUD works—if it blocks sperm, kills the little suckers, or prohibits the eggs from planting, but it hurt like hell to have the T-shaped plastic instrument implanted in my uterus, so I sure as shit don’t want to rip it out with my Diva Cup.

Thus, back to the tampons.

My period came a week early this month, and my mother says it’s from high altitude. I just moved to Colorado from Texas, and my welcoming party was a high elevation blood bath. Clot Fest 2012, my boyfriend calls it. Shark Week, my friends call it.

And the mountains are so beautiful, etc.

I have been obsessed with raccoons lately. As I sit in an itsy bitsy teeny weeny craptastic coffee shop in Nowhere Colorado, The Beatles’ “Rocky Raccoon” comes over the crackly stereo. They’re everywhere in my mind. I don’t know why I love raccoons, other than the fact that they’re sly. They live off of what the world leaves behind, makes use of what some people think is trash. And I live in the mountains in a house my family was going to abandon. No one decided to live there, so I took it over and slyly moved in, having to pay no rent, no utilities, and my grandmother even filled up the tank of the old El Camino she gave me to drive before she handed me the keys.

As I twirl along the gravel mountain roads in the El Camino, my eyes catch the sight of something that is not a raccoon, but a tree stump. It looks like a raccoon to me, because that is what I’m looking for. I want to find this animal with my own eyes, to see its beauty and its stealthiness. This latter aspect, I appreciate.

I thought using a Diva Cup was stealthy, was a way to get away from the consumerism of tampons—buying a product you will only use short-term, then throwing it away in the trash, which will inevitably lead to cute little sly animals ripping apart the plastic trash bags, then the tampons with their sharp curious teeth. I had a dog once that would eat my tampons. Whenever I returned home during that week of bleeding, I would find light green strings and red-stained fluffs of cotton around my floor. This was before the Diva Cup. I wonder about if I had had a Diva Cup back then, would she have gone after the rubber. I would think so, because it looks like a miniature kong, and the menstrual blood stuck to the sides of rubber would probably be even tastier to her tongue than peanut butter. But I don’t know these things.

What I do know is that the mountains are beautiful, and that writing about menstrual blood does not feel natural, but the fact of bleeding is one of the most natural things I can think of to write about when trying to write about nature.

The nature of my period is that it has always been exactly twenty-nine days in its cycle, and I bleed for precisely five days, with the heavy flow tapering off after day three. And then the IUD was inserted and my regular schedule went to hell. Now I bleed for an ungodly length of time, and the flow is an eruption, clots of red goo squishing out of the flooded tampon and onto my underwear. Why bother with the tampon? I sometimes wonder. So the IUD has wrecked havoc on my menstrual cycle, and that does not feel natural to me. I have never been on birth control before, because of that whole lesbian thing. Which I loved, and which I still somewhat identify with. But with a man in my life now, I now have to think about the fact that the menstrual blood could harden into a little human being. I don’t want children. I want to birth books instead. Books not babies.

My boyfriend and I watched a documentary about raccoons about a month ago, and there were a whole slew of images of baby raccoons waddling about, trying to shimmy their way down trees and climb into a storage shed. It was cute as hell. I want a raccoon as a pet, but I imagine it would eat my tampons. Having to re-live that experience is reason enough to not have a raccoon.

Maybe I should stop with the tampons already.

And the mountains are so beautiful, etc.

Chelsey Clammer received her MA in Women’s Studies from Loyola University, Chicago. She has been published in THIS, Revolution House, Spittoon, and Make/shift among many others. Read more here: www.chelseyclammer.wordpress.com.