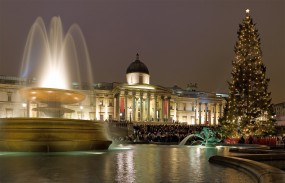 For many a British household, the theme tune to John Sturges’ The Great Escape has long since become an accepted part of the soundtrack to the season of goodwill. Yet despite the fact that the cast is comprised of an equal mix of both American and British actors, one never hears about the movie being spoken of in quite the same way as a Christmas favorite across the Atlantic. Nevertheless, its evergreen popularity with British audiences would suggest there is more to the way it continues to remain part of our own festive celebrations than Dickie Attenborough demanding to know why the air pumps aren’t finished as James Coburn drawls in his best Australian accent, “Aww patience issa virtue Wodger old boy.”

Filmed in the summer of 1962, the color, energy and spirit of The Great Escape captures the post-war optimism of a Britain ready to throw off the austerity of the 1950s—between the initial outbreak of Beatlemania, and the English World Cup victory of 1966. In many ways, the film subsequently embodies a sunny nostalgia that is far more appropriate to the mood of Britain on the eve of a sexual and economic revolution, than the grim reality of Stalag Luft III from which seventy-six men made their escape in March 1944. The scene where Steve McQueen jumps his motorcycle over the German barbed wire fences, while an unlikely source of Christmas spirit, feeds into the energy of its own contemporary moment reflecting the shift towards the youth counter culture of the 1960s.

However, when one thinks of the associative connection between military conflict and Christmas, the appeal of The Great Escape runs much deeper in the British psyche than its regular showing during the holiday season. Here, the popular image of the unofficial truce between English and German troops in December 1914, along the trenches of the Western Front, is inescapable. Men from both sides exchanging gifts and letters in No Man’s Land before being forced to resume hostilities, has become a resonant image embedded in both historical narrative and popular culture. Yet although many accounts of the truce refer to a game of football, questions remain as to whether such fraternization in the form of a formal football match ever took place. Nevertheless, the power of this image and the chivalric code of honor, nobility and decency it invokes remains a key point of reference for how the British continue to imagine and represent themselves in relation to the Great War.

This is immediately evident in the opening titles of The Great Escape, where a low angle close-up hones in on a small cluster of poppies in an anonymous field. It is a brief yet poignant indication as to how, while ostensibly set during the Second World War, the popularity of The Great Escape with British audiences at Christmas owes much to the power of the Great War’s hold on the English imagination. It is with the Great War that the discourse of official commemoration becomes a touchstone of the 20th century experience. Just as the ceasefire of Christmas 1914 embodied the calm before the storm where active combat was temporarily suspended, The Great Escape evokes a similar narrative paradigm based around what is in turns both good humoured and frosty, yet for the most part, mutually respectful dialogue between both the German Luftwaffe and their British counterparts.

Consequently, what The Great Escape does for the British Christmas is encapsulate a world that is half make-believe and half historical fact. A prison camp which has all of the color and Hollywood glamor of Steve McQueen, James Garner, James Coburn and Charles Bronson in their prime, and yet still manages to convey a true story in which three escape tunnels were built under all but impossible circumstances. Richard Attenborough (as Big X), Gordon Jackson (as MacDonald Intelligence), David McCallum (as Dispersal), Donald Pleasance (as The Forger) and James Donald (as Ramsey the SBO), are all perfectly cast to exemplify the embodiment of British flem and ingenuity, be it hiding the dirt from the tunnel in their gardening allotments or taking lessons in bird-spotting to cover Donald Pleasance’s forging operation.

Moreover, the close-knit nature of Richard Attenborough’s X organization ensures that the emphasis is not simply on pathos, but the responsibility the men take on for each other. The best scenes illustrate this bond none more so than Donald Pleasance slowly going blind and trying to hide his condition from James Garner who knows his own odds of escape are terminally shortened by taking him along. It is here that the real secret as to why the film resonates so much for British audiences during the festive season lies in a message of victory rather than defeat. While Steve McQueen going full throttle towards the entire German army is as far from the historical truth as the idea of angels appearing to shepherds in the field, The Great Escape suggests the power of the imagination to defeat the dull, mundane reality of day-to-day existence. It underlines, in the language of ‘sacrifice’ as its own form of goodwill to all men, what a small group of individuals can do when they refuse to accept that they are no longer able to fight an unacceptable and despotic ideology.

The underlying appeal of The Great Escape for British audiences at Christmas continues to ask questions of not just how the Second, but also the First World War figures in the English imagination. It is a film where the American star cast doesn’t so much steal the show as play off the idea of British behavior as a uniform officer class, appealing to a post-war generation looking to build a new world in which an American, rather than British, accent begins to take precedence. It is an act of reinvention, where every Christmas, The Great Escape allows the British to indulge in the historical fantasy as well as the historical fact of how they see themselves. At the same time, the peculiar and yet oddly apt relationship between The Great Escape and a British Christmas is one, as a piece of ‘family entertainment,’ that almost serves to transcend the subject of war and reaffirms for its audience the importance of friends and loved ones.

Thus, it is in the poignant and close juxtaposition of the new and the old that Christmas by its very nature gives synthesis to both past and present. The imaginative capability to reconnect to an irrevocable history, which in The Great Escape blurs the lines between the two global conflicts of the last century, perhaps reminds a particularly English sensibility in silhouette of a distant battlefront. As the world weary Charles Ryder observes at the end of Brideshead Revisited, the idea of the soldier returning is one that implies a deeper subtext:

“Something quite remote from anything the builders intended […] a small red flame—a beaten-copper lamp of deplorable design, relit before the beaten-copper doors of a tabernacle; the flame which the old knights saw from their tombs, which they saw put out; that flame burns again for other soldiers, far from home, farther, in heart, than Acre or Jerusalem.”

If for the English The Great Escape affirms and adds to the seasonal atmosphere, it may be in this sense of ‘far from home,’ which translates from the trenches of the Western Front to the technicolor of the early 1960s, and carries the strongest appeal to an audience constantly aware of those ‘other soldiers.’ A timely Yuletide reminder that it is in the power of the imagination itself that the Christmas nativity, and the ability to fight and resist, are born.

Jonathan Jones is a freelance writer currently living and working in Rome. His main influences are Scott Fitzgerald, Raymond Chandler, Saki and Yann Martel. He qualified in 1999 with his M.A. in Creative Writing from Bath Spa University College, and in 2004, with an MRes in Humanities from Keele University. He now teaches writing composition at John Cabot University in Rome.