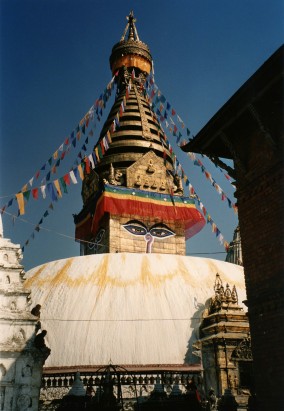 On Thursday, my family and I will (thankfully) have a festive Nepali meal. We’ll gather around my parents’ 1980s country style dining table with its white legs and blond wood top. There will be an awfully white, bright light above us spotlighting our non-traditional meal. And seven people will be squeezing in around the table, making the best of an American holiday.

For much of the 1980s, the first decade my family and I spent in the US, we spent a traditional Thanksgiving dinner at the home of a family friend. This family lived in rural Bucks County, about forty-five minutes away from where my parents and I lived in a town outside of Philadelphia. There were over twenty people at the dinner table, including children. There was turkey, duck, ham, several sides, and so many types of pies. The women cooked, with the mashed potatoes being made closest to the dinner. Those not cooking would be in the basement, either watching a football game or chatting by the warm fireplace. There was a refrigerator in the basement, and my brother and I enjoyed many a cold coke bottle during those hours waiting for dinner. While waiting, we’d chat shyly with the other adults there. At least once, the host would take us out for a ride on his farm tractor. We’d pass the other hours playing billiards. There was a formal pool table too, and I formed my first schoolgirl crush on the man who taught me how to play pool one year. These gatherings shaped my family’s fond anticipation of this holiday.

In the 1990s, each member of my family left the nest for one pursuit or another. For a few years, my mother taught in Upstate New York, and family gatherings usually consisted of just us four. Then, I went to college and so did my brother. I went to graduate school. My mother went to Nepal to find employment. And my father moved to Virginia. It wasn’t until the early 2000s when we found time to gather again, consistently, as a family during Thanksgiving. But by then, our palates had changed.

This year on the dinner table there will be: puri (a fist-sized round flat bread rolled from chapatti flour and then deep-fried), two vegetable dishes (one a curry, the other a sautéed green), homemade yogurt (which I won’t eat because I’m vegan and the yogurt is not, but the vegetarians in my family will enjoy eating it with the puri), and cilantro chutney. When I first shared this menu with my parents, there was general satisfaction but my mother was hesitant.

What about mashed potatoes, she asked? Oh my. I became anxious.

The story of the mashed potatoes:

In 2002, many years before the idea of making our Thanksgiving meal align with our taste buds that are accustomed to Nepali food, I started the tradition of making vegetarian and vegan lasagnas a standard main courses at our holiday dinner. Sometimes the rice cheese either didn’t melt or if it did, tasted odd, musty. I managed to get down each cruelty-free bite with the help of a heaping forkful of cranberry sauce. Fortunately, there were also mashed potatoes at the table. All I did was add water to the boxed mixture. I was the only one who liked it.

In 2003, I tried to make mashed potatoes from scratch. It would be vegan and easy to make. No recipe needed. What else was there to mashed potatoes then just, well, mashing? But the word glue comes to mind with this memory. At first, I dug into the process of making mashed potatoes using my hands. It was, to say the least, hard to do. I persisted. But soon I switched to crushing the cooked potatoes with a big fork. Then I tried adding milk, which only made the potatoes more viscous. There was no fluffy quality to them. Like I said, glue. I eventually discovered the reason behind the congealed quality of the taters was that I didn’t use the masher tool that could transform potatoes into clouds. It’s quite an essential element.

In 2005, I got into a fight with my brother, because I told him that he couldn’t mash potatoes with a plastic masher, which my father had proudly bought at the Food Lion. I’d forgotten to bring my stainless steel masher — which I owned by then — and I was beside myself with fear of eating lumpy mashed potatoes. That year, my American boyfriend from Michigan joined our dinner and created magic with the masher and the potatoes. We ate silently, but thankfully.

In 2012, my parents insisted on boiling potatoes and getting them ready for my boyfriend to mash. We ate them, but the consistency, according to my mother, wasn’t as good as in the previous years. My boyfriend investigated. It turns out that I’d erroneously guided my father on what type of potatoes to buy.

What about mashed potatoes? My mother asked this year, knowing they would be the cloud kind made by my boyfriend, not me, and so they are now a desirable dish. And she knew that he wouldn’t make the same mistake as last year. Still, I had to stop myself from asking her why she wanted mashed potatoes when lately she was against eating white starch. In the last two years, she’d even convinced my father, who grew up with a rice paddy as his backyard and who needed white rice at the table even when there was bread, to substitute quinoa for rice. She seldom cooks with potatoes. It’s safe to say that my mother and I have tension when it comes to potatoes, my go-to vegetable.

In the space of the last eight years, we have attempted and then given up on some of the more traditional American Thanksgiving dishes—mainly disregarding the thought of lasagna altogether. One year, I tried to serve soup in a bread bowl. My parents couldn’t figure out how to eat the bread, especially with soup in it. Honestly, I didn’t know either. That year, I fed much of the bread carcass to the birds. Another year, I cooked Tofurky. The boxed quantity of it was too big for us, partly because of how filling even just one bite of it was. Everyone said it wasn’t a bad dish, just “interesting.” By this time, my boyfriend’s delicious mashed potatoes were a staple at the table. So we didn’t go hungry. I’ve been asked not to cook “that tofu” dish again.

As you can imagine, preparing delicious yet vegetarian and vegan-friendly Thanksgiving dinners is a challenge. Another year I offended my brother, again, insisting that no turkey be cooked in my presence. I have to admit that while I am proud and thankful that no turkey has since been cooked in my parents’ home, that demand once made, has created an uncomfortable social environment. Which brings us to this year and how I wanted the menu to be simple and uncontroversial.

A few weeks ago, I declared to my parents that this Thanksgiving we eat Nepali dishes for dinner. Thankfully, they obliged. My mother and I usually discuss the dinner menu about a month or so out. Typically, these conversations are dissatisfying because every year, we’re trying to find that dish that is a perfect substitute for the turkey. Yet, we haven’t even eaten a turkey at Thanksgiving in over ten years. I figured we could make dinner this year to be simple, since it will just be my parents, my boyfriend, and a few family friends. The family friends are of South Indian and Nepali ethnicities. And then there’s my white American boyfriend from Michigan who, thankfully, likes Nepali food.

The 2013 menu: puri, two vegetable dishes, the homemade yogurt, and cilantro chutney. We’re also including mashed potatoes and gravy (no mustard oil and salt), cranberry sauce (of course), apple pie (I make it and my parents love it), and pecan pie (because my mother has been craving it). Sigh. The intentions for a simple dinner are already becoming complicated again. Like us, like my family consisting of Nepalis, a mid-western white American, and people with both vegetarian and vegan diets. Regardless of the success (or failure) of the meal, we will all be thankful for each other. We can, after all, be a family as complicated as our meals, yet still love sitting a bit squished next to one another around the Thanksgiving table, enjoy our diverse meal and diverse selves all under bright lights.