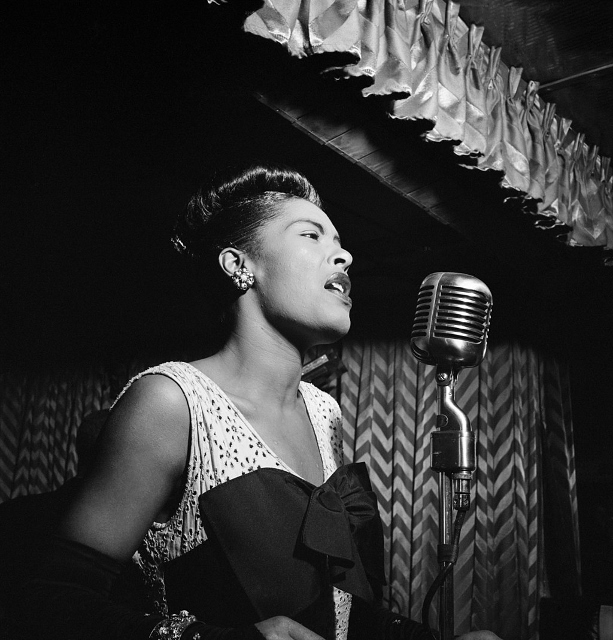 When I learned that my old friend, Greg (I’ll call him), had died from brain cancer, I felt relief at his release. His final weeks had been horrible, his mind gone, his body shrunken and twisted, incontinent, the shell of him writhing in dark pain. We had been friends since our first week in college many years ago, his infectious enthusiasm enduring through his success as a management consultant and his hobby of lead roles in amateur musical productions. Even at the end, when he had lost the power of coherent speech, he revived to sing snatches of show tunes, lyrics still embedded in his diseased brain when all else was lost.

That singing made me recall a night we had shared decades before, the summer of 1958, when we were in our early twenties, newly married, joined by another young couple, at an outdoor Billie Holiday concert in Central Park.

It had been my idea to go, a decision supported by my then-wife, Judy, also a jazz fan. Greg and his wife (call her) Jeanne, deep into musicals, knew little of jazz. Nor did the other couple I’ll call Dan and Linda. Dan had been Richie’s childhood friend. He and I had met several times, got on well. Linda was new to me, a seemingly pleasant, quiet young woman. Regardless of musical tastes, the four were up to an evening in the park. The weather was ideal, the performance free. And we were three young, happy couples looking forward to our futures with expectant energy.

When Billie Holiday started to sing, I knew immediately that something was seriously wrong. Her voice was broken, straining for notes and intonations, the flaws amplified by the sound system speakers suspended around the Central Park bandstand. I couldn’t help wincing in my awareness of her waning talent. Our friends just shook their heads, not realizing who they were hearing, unaware of her reputation, certainly not of the legend she embodied. “She’s awful,” one said, and the others nodded.

I couldn’t help agreeing. For me the “awful” was not just being subjected to an out-of-tune singer, but the great sadness of hearing what had become of the greatest jazz singer of all times. We were witnessing the disintegration of an idol.

I had been introduced to Billie Holiday’s music on a local jazz station when barely into my teens. The disk jockey favored “Crazy He Calls Me,” playing the tune almost every day. It took several weeks for my immature ears—expecting the lilting range of an Ella Fitzgerald—to understand Holiday’s real gift. Her voice, in comparison, was limited. But I quickly got it. It was a voice that penetrated the depths of a song, laid bare its emotional core.

When asked why she didn’t perform “Strange Fruit” more often, Holiday had responded, “I only do it for people who might understand and appreciate it. This is not a June-Moon-Croon-Tune. This song tells a story about pain and heartache.” For her, “Strange Fruit” had grown beyond a protest lament about lynching. It came to embody the increasing sadness of her own life, the essence of all her singing. The voice didn’t merely entertain. It haunted.

But not on the night of this Central Park concert. It grated. When the others wanted to leave early in the performance, I didn’t protest. Judy said nothing. It wasn’t fair to subject friends to Holiday deep in decline. And so, we wandered off to somewhere else in Manhattan for yet another ephemeral night of our young lives.

The year after that concert, between May 31 and July 17, 1959, Billie Holiday lay in New York’s Metropolitan Hospital, dying from cirrhosis of the liver and heart disease. Patrolmen stood outside the hospital door after a raid discovered drugs hidden in the room. Frail as she was, police had placed her under arrest for possession, hardly the first time. She expired from pulmonary edema on July 17 at age forty-four. Despite her years of popular performing, she died broke, having been swindled out of her earnings by more than one abusive man. All that remained was seventy cents in the bank and $750 strapped to her leg.

But Billie Holiday’s legacy resonates throughout contemporary jazz and popular music. When she died, Frank Sinatra said of her, “With few exceptions, every major pop singer in the U.S. during her generation has been touched in some way by her genius. It is Billie Holiday who was, and still remains, the greatest single musical influence on me.”

And not just singers. When I listen to her, I can’t help thinking of her recordings with Lester Young, their magical recordings of the nineteen thirties, Young’s obbligato tenor in perfect union with Holiday’s voice. For a time, theirs was an ideal musical and platonic friendship.

They met in 1934, recorded together, toured with the Count Basie Orchestra, and drank and did drugs together. He coined her nickname “Lady Day,” she his, “Prez” because “he was the greatest.” They became estranged, didn’t speak for three years, after he tried to get her to give up heroin and, when asked about him then, she responded with the past tense, “Lester was my favorite tenor player.” Yet they reconciled in their final years, and as one writer put it, “saw in one another their deterioration staring back at them.”

Young died two months before Holiday in 1959, equally wasted mentally and physically. At his funeral, the family of Young’s estranged wife’s wouldn’t allow her to perform. Close to hysteria, she protested: “Those motherfuckers won’t let me sing for Prez.”

They had performed together for the last time on Sunday, December 8, 1957, for a CBS TV special called The Sound of Jazz, sharing the stage for Holiday’s song “Fine and Mellow” that begins, “My man don’t love me / Treats me oh so mean.”

According to the late jazz critic Nat Hentoff, who participated in planning the show, Young and Holiday sat on opposite sides of the room during rehearsals. Young was so weak Hentoff allowed him to stay out of the big band segment and sit until his solo during the Holiday song. Yet Hentoff offered this description of Young’s performance:

Lester got up, and he played the purest blues I have ever heard, and [he and Holiday] were looking at each other, their eyes were sort of interlocked, and she was sort of nodding and half–smiling. It was as if they were both remembering what had been—whatever that was. And in the control room we were all crying. When the show was over, they went their separate ways.

They drank together often after they made up. But not on the evening of the broadcast, Young too sick to be with her and she too sick to be with him. But what’s really important for musical history is the excellence of that final musical union despite the devastation of addiction and deteriorating bodies. Did it matter for them, though?

Greg lived a much longer life than Holiday and Young before his body deteriorated without addiction. What about the rest of us from that concert night? I assume that, except for perhaps Judy, the others quickly forgot about their exposure to Billie Holiday’s pained singing. They wanted to be entertained, seeking pleasures of people in their twenties, consumed by the joys of friendship and the promise of lasting love. Despite my upset at Lady Day’s decline, I suppose I was too. Yet that night could have been considered a harbinger for us all.

It’s not that my friends shared her financial distress, their income wasted by self-destruction. Hardly. The men’s careers were built on PhDs and law degrees that led to professional successes and a financial comfort that permitted comfortable homes, expensive cars, travel, fine dining, charitable involvements. My decision to teach resulted in a much smaller income and a much less affluent life style. Still, though most of my life I could buy houses and cars and travel, accumulate a retirement fund.

What we shared with Billie Holiday was pain and heartbreak.

Ten years after that night, Judy had her first mental breakdown, ravings of paranoia that deepened into complete psychosis and immersion in a world of battling voices. A chain smoker, she died of lung cancer in 1992 while living in a halfway house. I had divorced her and remarried by then.

Dan’s wife Linda also had serious mental issues. Greg told me about them, how Dan’s inability to continue living with her led to his own divorce. They did have a mentally handicapped son, now a middle-aged adult barely able to live on his own.

The last time I saw Dan, he was with his second wife at Greg’s funeral. We spoke for a while, exchanged words of grief. Greg’s wife, Jeanne, couldn’t attend the service, wallowing in Alzheimer’s, lucidity lost, unable to control angry ranting. Despite personal success and affluence, Greg and Jeanne in mid-marriage had endured the deep grief of a son’s suicide and a daughter’s functioning compromised by neurological issues.

When we walked away from an annoyance that night so many years ago, seeking immediate pleasures, we had no idea what awaited our futures. The bitter haunting was not just limited to one woman on one night. Every time I listen to the recorded voice of Billie Holiday, I understand more and more how deeply she expresses the pain so many of us cannot escape.

Top photo of Billie Holiday was taken by William P. Gottlieb and is now in the public domain.