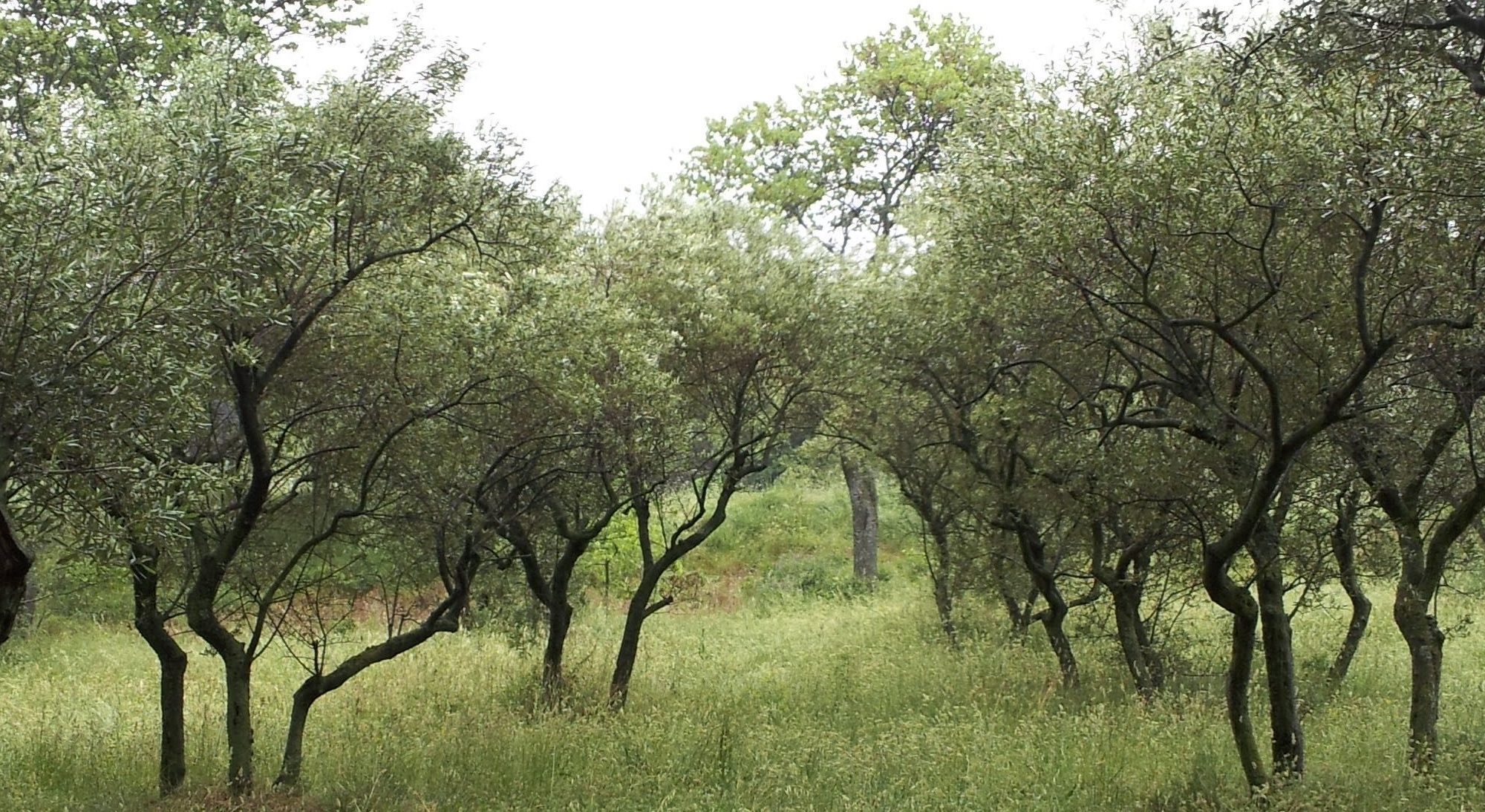 I sit on a hotel’s tile balcony, halfway to my destination. The midday sun lies hot on stucco walls and tile roofs. Between the buildings I see a sliver of sea; across the bay, a spine of green-sided mountains cuts the sky. Around me gulls call. All colors here are bright, clear, and strong: white like bleached bone, green the color of cactus, tiles brick-red, and the sea as blue as only blue can be described. Blue.

I am on my way from Barcelona to Arles, France, where Vincent van Gogh spent two of his final three years. In Arles he famously went mad, cut off part of his ear, and finally checked himself into an insane asylum in St. Remy de Provence, fifteen minutes to the north. In this region, also, he painted many of his best-known works: Sunflowers, The Night Café, Irises, Starry Night. The landscape of the region now surrounding me belonged, and in some sense still belongs, to him, who gave it some of its most memorable and permanent expression.

Vincent van Gogh is a writer’s painter. When I was younger, I struggled to connect to visual art. Paintings felt static and limited to me – they had no words in them. Then, browsing aimlessly in the library one afternoon, I happened upon van Gogh’s letters to his brother Theo, in a fat volume selected and edited by W.H. Auden.

“From the window of my studio,” wrote Vincent to Theo, “the city, with its towers and roofs and smoking chimneys, stands out as a dark, somber silhouette against the horizon of light… That streak of light, however, makes the wet roofs glisten here and there in the dark mass of the city … and enables one to distinguish between red tiles and slates, though the whole mass has but one tone. The Schenkweg runs through the foreground like a shining streak through the water; the poplars have yellow leaves; the banks of the ditches and the meadows are a deep green; the little figures are black.”

Describing an urban landscape as vividly as Dickens’s Great Expectations or Wordsworth’s “Composed on Westminster Bridge,” this was someone I could understand. I devoured the selected letters, then bought the three-volume set, each chunky as an encyclopedia.

I showed my mother an excerpt. “He writes like a painter,” she said. I took exception. “He writes like a writer,” I said, affronted. But of course she was right. By using words as if they were paint, he brings the world of painting to those of us who love words.

So when I had a chance this summer to travel to Arles to seek his former world, I jumped at it. From my trip’s outset, I began to grasp why the region inspired painters, painters, painters. Barcelona itself is a town of artistic sensibilities. Its artists—Picasso, Gaudi, the Modernists—left their mark not only on its physiognomy but on its psyche. The city is decorated to its flagstones. Its benches are covered in mosaic and topped by ornate ironwork lanterns. Its intricately-shaped balconies spill over with plants. Friezes by Picasso decorate one square. The shops proudly display wares of weeping shapes, line sketches, mosaics, and mad curves. Even on the city’s outskirts, the buildings, in geometric washes of orange, red, blue, green, resemble some Cubist painting.

Arriving in Arles, I find a curious excrescence of the modern within the still-existing structures of the ancient. Tawny stone houses rise along a warren of tiny crooked streets. These open abruptly into the stately squares of Arles.

Today’s Arles, in fact, has resulted from continuous inhabitation throughout the twenty centuries of its existence. So in a way, it’s easy to imagine van Gogh walking these streets, because nothing in the basic architecture has changed.

I visit l’Espace van Gogh, the former hospital that took him in when he cut off his ear. The city keeps the courtyard filled with the same flowers he depicted in his famous 1889 painting. The archways remain yellow; the beams and doors are still blue. This evening, the city’s ateliers, or art schools, are having an exhibition. The interior walls bear paintings and charcoal sketches from nude models. A crowd has gathered for a graduation speech. In the garden a bevy of children run and shout while waiting for their parents. They are playing tag, racing down the avenues around the central fountain.

Here, at the old hospital, I expected a quiet space for contemplation. But the shouting children and the talking crowd within the doors seem fitting, as right as the yellow black-eyed Susans, crimson impatiens, white begonias, and deep blue-purple petunias. What van Gogh craved in life, he found in death. He wanted his works to sell—now they rank among the most expensive paintings worldwide. He yearned for a community of artists: now that community displays its work in his spaces. He craved friendship, and now many thousands of us who have read his words or pondered his paintings find a friend in him, identifying with his struggles and wishing him well.

So van Gogh, in a way, seems nearby—yet in others he remains a ghostly and separate figure. That’s brought home to me two days later, when I drive to St. Remy de Provence.

Away from the center of St. Remy, past stucco residences, the streets give way to a tiny, sandy path along the monastery wall of the St. Paul Centre du Santé. We wend our way through the courtyard garden and make our way up a deserted staircase of plain stone. Here, in the monastery’s asylum, van Gogh produced some of his greatest work.

Van Gogh’s bedroom is barren. A four-poster iron bed takes up most of one whitewashed wall. A desk and chair occupy the other. Between the iron bars of the window, a view of gardens and fields presents itself, nodding with poppies and irises planted in van Gogh’s memory. The mountains lie shrouded in fog.

Two paintings adorn the room. One, an artist’s rendering of van Gogh’s face, depicts madness and confusion by a halo of manic dark colors around his head. The other print—a van Gogh landscape—could not differ more. It’s bright with wheat, showing golden fields beside wavy blue mountainsides that climb off to the side of the picture. A caretaker’s hut anchors the scene, settled stolid and workmanlike on the warmly colored hill. A figure of a reaper works the fields. It’s a serene, though sorrowful, view, grandly somber as in so many of van Gogh’s works.

Van Gogh painted this scene beyond his window many times, sometimes with a figure, sometimes without. Van Gogh obsessed over his figures, repeatedly claiming he had to make more drawings of the figure and paint from models more often. His recent biographers, Steven Naifeh and Gregory White Smith, suggest he craved interacting with models as much out of loneliness as artistic integrity. Van Gogh, they imply, might have found success in his lifetime if he’d stuck with landscape from the start.

“Figure drawing would always energize him, even as success at it always eluded him,” they write. “As a way of touching the sentiments he prized and of making the human connections he longed for, he never found any subject as satisfying as the figure, even as he created some of the most sublime landscapes in Western art.”

Yet van Gogh’s figures, eked out with such effort, offer indispensable symbols of basic human concerns within the landscapes whose power he depicts so effectively: man’s loneliness in nature, the setting of arms and hands against earth that must be forced to give up its bounty, the individual’s anonymity in a crowded park. Van Gogh knew instinctively how figures would humanize his landscapes. Without his figures, his canvases might not be placed in the ranks of the great—and certainly not without van Gogh’s passionate interest in human struggles, making his works speak to some both shameful and exalted part of us.

In his bedroom a careful silence reigns. A handful of other visitors trickles by in twos and threes. Each of us instinctively gives the others a few minutes alone in the room, for solitary communion with the austerity of this moment in van Gogh’s life.

We step from the monastery out into the small, tree-lined roadway in front. The earlier rain has declined to a drizzle and a scatter of tourists has gathered. Their umbrellas float along the avenue. Beside us, olive trees stand in a grove of little knots, like rope twisted around some inner secret.

Looking at the small, stunted olive trees, I find they fall somehow short of the olives van Gogh painted so memorably in his 1889 Olives. His trees, wild and contorted, dance across an undulating gold and purple landscape as though they can walk. These ones, by contrast, sit crowded and shrunken in the chill mist. Beside them the asphalt road is flat and plain. Cars pass in a wet sweep. No birdsong can be heard, but no deep quiet reigns here. A modern hum from an indiscernible source fills the air.

It is strange that I think of van Gogh as near me, as an exponent of modern sensibilities. We know him now as the “trailblazer,” in the words of art critic Sue Hubbard, “of modern art.” Like modern painters, van Gogh painted not reality but real things as processed through the imagination of the painter. “[R]eal painters do not paint things as they are … They paint them as they themselves feel them to be,” wrote van Gogh to Theo. And he suffered, as his letters show, from thoroughly modern alienation and loneliness. His depressions and melancholies resemble intensified versions of our own.

But van Gogh died before the 20th century broke upon the earth. In his time, even the car had not yet been invented. Though his works are somber, often wild, even garish, rarely are they discordant, and often they express extraordinary serenity. No doubt he imbued his images with imagined qualities that even in his time no reality could match. But the peace in van Gogh’s paintings, I think, reflects something real that no longer exists in St. Remy or Arles.

It is Picasso’s world, not van Gogh’s, that we live in now. Though we have appropriated van Gogh as our own, a gulf lies between him and us. Picasso survived into the bewildering underpinnings of our age—World War I’s death count, World War II and its bomb, the beginnings of modern environmental crises. Van Gogh’s conception of nature, though it presaged our modern view, disintegrated in the heyday of Picasso into squares and triangles and blocks, a more broken age.

Though van Gogh’s fame has grown, and though his letters seem to bring him to us, we can’t reach the world he lived in, nor the completeness of the sensibility he brought to his art and writing. We live in a faster time. So many of us, writes Sylvia Plath in her chilling poem “Mushrooms”—so many of us. Perhaps, though van Gogh’s eye feels modern in its escape from the exact and in its personalized vision, that is what makes us love him so much. He invites us to imagine our own selves, but within an atmosphere that has fled. He brings us an atavistic sense of natural serenity—one that in its fullness, along with van Gogh himself, we and the world have lost.